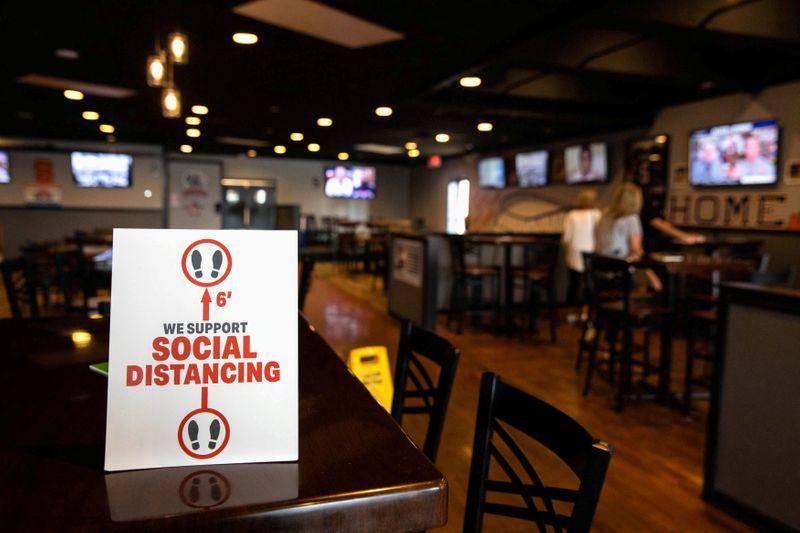 (Reuters) - A stodgy U.S. recovery showed little sign of accelerating over the last week with hints emerging that the quick job gains of May and June may be fading, according to high frequency data and analysis from companies, forecasters and government analysts.

With some states reimposing restrictions on commerce, particularly tighter rules around bar and restaurant openings, an additional 1.4 million people filed for unemployment insurance - the first time since March and the imposition of a national state of emergency that new claims have risen from the prior week.

Expectations of millions of additional jobs being added in July are "too optimistic and we may flatline after two months of sharp improvement," said Karim Basta, chief economist at III Capital Management.

That would leave the U.S. still about 14 million jobs shy of where it was in February. About 32 million are collecting weekly unemployment benefits that may be drastically curtailed in coming weeks when expanded federal payments expire, a further blow to the economy's spending power during the ongoing pandemic recession.

The economy did add more than 7 million jobs in May and June as firms brought workers back from furloughs and hired anew on hopes the coronavirus was controlled and the economy on the verge of a steady rebound.

But threats to any further large recovery in jobs could be seen elsewhere.

Data from employee time management firm Kronos showed growth in workshifts across a variety of industries has largely stalled since late June in regions outside the Northeast, where the virus hit hard in March and April but has remained relatively contained amid a surge in other parts of the country.

Small business hiring may have plateaued. Data from Homebase, whose users are heavily concentrated among small employers and particularly restaurants, showed the number of workers on the job fell slightly for the week through July 19 and has been largely flat since June.

Federal Reserve officials have cited Homebase as one of the newer high frequency data sources they are monitoring, and a St. Louis Fed employment forecast keyed off of that information shows employment overall falling in July.

Other recent data were mixed, adding to evidence that the U.S. recovery remains tepid for now as states struggle to contain the pandemic and consumers and businesses parse through how to safely operate.

More states and companies for example are mandating masks, a simple step that health officials say could allow a broader range of activities to continue at less risk to public health.

J.P. Morgan economist Jesse Edgerton said there may be initial hints the message is taking hold. Earlier this summer, he wrote in a Wednesday analysis, the link between in-person credit spending at restaurants and growth in coronavirus cases two weeks later seemed convincingly large; it has weakened in recent days "suggesting that increased precautions like mask-wearing and outdoor dining are beginning to break the link between economic activity and virus spread."

Still, credit card spending has remained flat so far over the month, he said, "suggesting that the rapid economic rebound seen in May and early June has lost momentum but not reversed."

Measures of traffic to stores rose last week, with cellphone tracking firms Unacast and Safegraph both showing more trips to retail locations. Unacast estimated retail visits were within 15% of 2019 levels through the week ended July 18.

Oxford Economics' recovery tracker fell slightly, its third decline in the last five weeks, driven down by the rise in coronavirus cases and deaths, and weakening measures of demand.

"While the rebounds in retail sales, employment, and industrial production through June were alluring, policymakers should not fall under the spell of rear-view-mirror economics," Oxford analysts wrote. "As of mid-July, the economy is emerging quite frail from its first rehabilitation phase, and the risks of a renewed downfall are real."