UK's Labour plans to make companies give shares to workers

By Kylie MacLellan LIVERPOOL, England (Reuters) - Large companies would be forced to transfer as much as 10 percent of their shares to their workers under plans set out by Britain's opposition Labour Party on Monday. Labour, which under socialist leader Jeremy Corbyn has shifted from a centrist pro-business platform to a more interventionist left-wing pitch, is using its annual conference to detail its plans to help a greater number of people to share in economic prosperity that it says is 'hoarded by the few'. 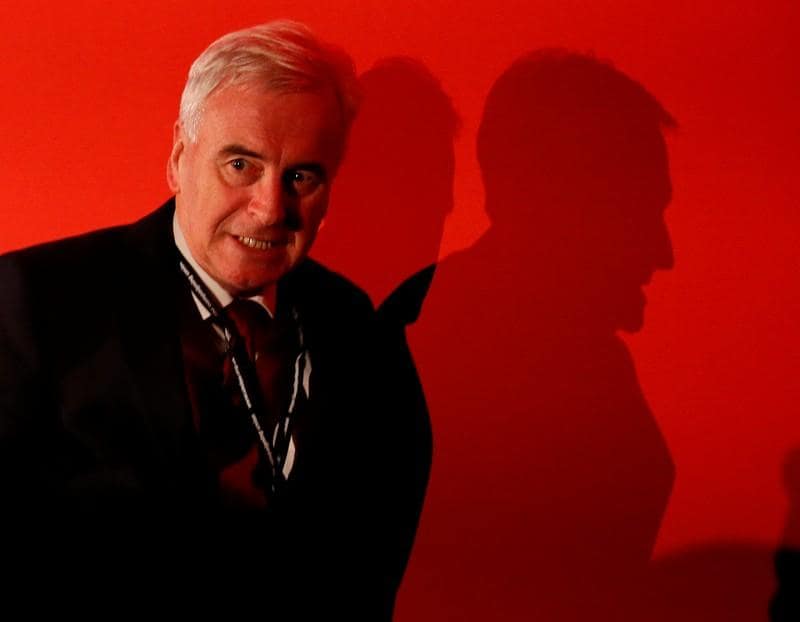 LIVERPOOL, England (Reuters) - Large companies would be forced to transfer as much as 10 percent of their shares to their workers under plans set out by Britain's opposition Labour Party on Monday.

Labour, which under socialist leader Jeremy Corbyn has shifted from a centrist pro-business platform to a more interventionist left-wing pitch, is using its annual conference to detail its plans to help a greater number of people to share in economic prosperity that it says is "hoarded by the few".

The party has announced plans to nationalise key industries, including water, energy and rail, and to give workers a third of seats on company boards.

Labour said that every company with more than 250 employees would have to create an "Inclusive Ownership Fund", transferring at least 1 percent of their shares into the fund every year, up to a maximum of 10 percent.

"The shares will be held and managed collectively by the workers. The shareholding will give workers the same rights as other shareholders to have a say over the direction of their company, and dividend payments will be made directly to the workers from the fund."

Labour has cited the example of Germany, where workers sit on company boards, but the business lobby group, British Chambers of Commerce, criticised Labour's plan, saying it could deter people from investing in Britain.

"Let no one be fooled, Labour’s proposals are both a tax grab and an unprecedented overreach into the way many of our businesses are run and will raise serious concerns," BCC Director General Adam Marshall said.

"At a time of peak Brexit uncertainty, when Labour should be setting out how it will support business confidence and investment, it is announcing policies that would deliver the exact opposite."

Under the plans, individuals' dividend payments would be capped at 500 pounds a year. The rest would be transferred back into public services in the form of a "social dividend" that Labour estimated being worth 2.1 billion pounds by the end of its first term in government.

"The headline point about giving workers equity is a clever disguise for a potentially enormous levy on business, since any dividends over the 500 pound cap paid to employees will go into the public coffers," he said.

McDonnell also promised to do more to tackle what he described as a "minority" of companies who were avoiding paying their taxes "on an industrial scale".

Labour would mobilise shareholder power, bringing together organisations from churches to trade unions and pension funds to put pressure on companies, he said. It would also demand companies sign up to a Fair Tax Mark standard to demonstrate they pay their fair share of taxes.

"Make it clear and make it loud, the warning to the tax avoiders is: the game is over," he said.