By Laurence Frost PARIS (Reuters) - Britain's decision to reimpose coronavirus quarantines on France and the Netherlands has sparked dismay among airlines and airports struggling to overcome the industry's worst crisis. European airline shares tumbled on deepening concerns that the weaker than hoped travel recovery could yet stall or be reversed by new outbreaks and restrictions. Shares in EasyJet , which is the most exposed carrier with UK-France routes accounting for 14% of capacity, dropped by 6.8% 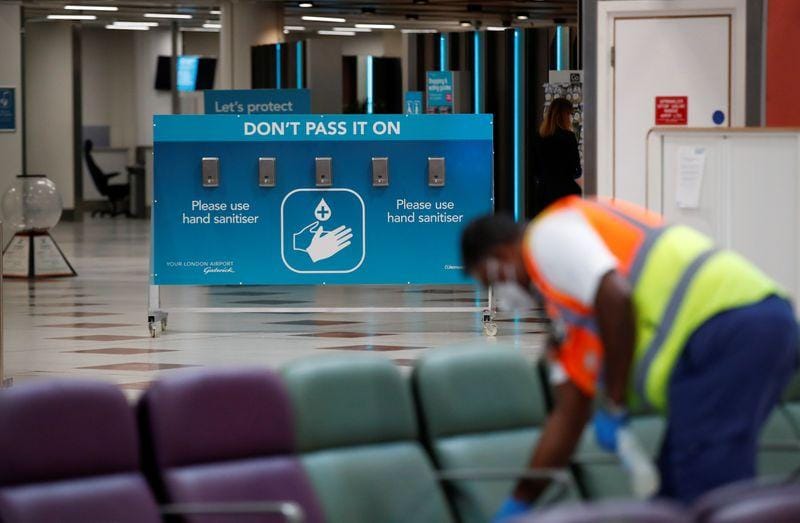 PARIS (Reuters) - Britain's decision to reimpose coronavirus quarantines on France and the Netherlands has sparked dismay among airlines and airports struggling to overcome the industry's worst crisis.

European airline shares tumbled on deepening concerns that the weaker than hoped travel recovery could yet stall or be reversed by new outbreaks and restrictions.

"It's not so much about this summer or even this year, which is a write-off," Manduca said. "It's more about direction of travel, a step in the wrong direction for a market that's trying to recover."

British holidaymakers flocked home early after their government removed France, the Netherlands, Malta, Monaco and two Caribbean territories from a list of unrestricted destinations, with effect from 0300 GMT on Saturday.

The UK move comes a day after airlines lowered their European outlook, with the International Air Transport Association (IATA) predicting a 60% decline in 2020 passenger numbers.

It follows a similar UK decision last month to remove top destination Spain from the so-called safe list. Other countries, including Norway, have also added restrictions as COVID-19 case numbers spike in some areas.

"The urgent priority is to implement pragmatic alternatives to quarantine," the airline body said on Twitter.

The 14-day quarantine is a major deterrent against UK outbound travel in the latter half of August and September - a period that Olivier Jankovec, head of airports grouping ACI Europe, said is "not insignificant by any means".

Determination to avoid a return to total lockdown is driving tougher travel curbs as well as policy incoherence among governments, Jankovec said.

"Why on earth are we reopening nightclubs and at the same time imposing new travel restrictions?" he added. "You're much safer in an airport or on a plane than in a nightclub."