By Lucia Mutikani WASHINGTON (Reuters) - The number of Americans filing first-time claims for jobless benefits fell last week, but remained extraordinarily high amid widespread business restrictions to slow a rising tide of new COVID-19 infections and lack of additional fiscal stimulus. The bigger-than-expected decline in weekly unemployment claims reported by the Labor Department on Thursday was likely influenced by the Thanksgiving Day holiday, which economists said could have impacted the model the government uses to strip seasonal fluctuations from the data 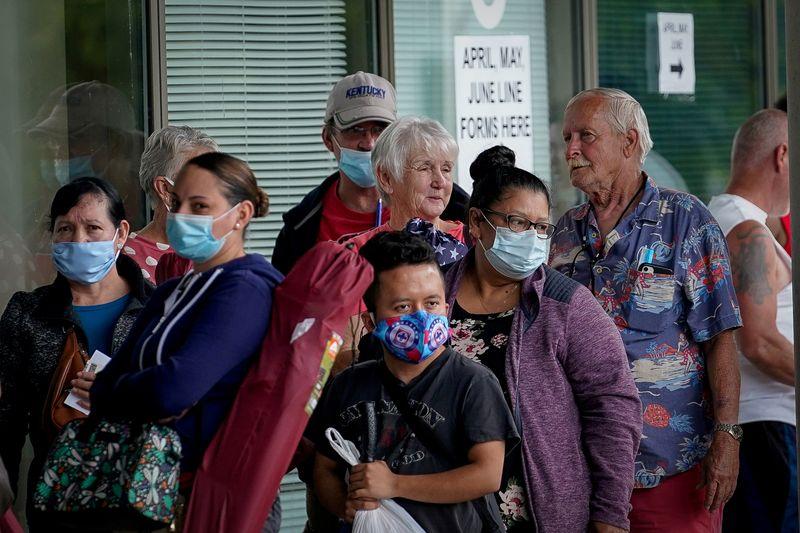 The bigger-than-expected decline in weekly unemployment claims reported by the Labor Department on Thursday was likely influenced by the Thanksgiving Day holiday, which economists said could have impacted the model the government uses to strip seasonal fluctuations from the data.

The pandemic and almost depleted coronavirus relief package are hampering the economic recovery, with services industry activity slowing to a six-month low in November, other data showed. Republicans and Democrats in Congress remained unable to reach agreement on another package on Wednesday, with top Republicans pushing what the Senate's top Democrats dismissed as an "inadequate, partisan proposal."

Economists polled by Reuters had forecast 775,000 applications in the latest week.

Including a government-funded program for the self-employed, gig workers and others who do not qualify for the regular state unemployment programs, one million people filed claims last week.

A government watchdog on Monday said the claims data was inaccurate as the Labor Department was using traditional estimates, which were not appropriate given the economic shock caused by the coronavirus pandemic.

The Government Accountability Office said state backlogs in processing applications had led to people submitting claims for multiple weeks of retroactive benefits during single reporting periods, inflating the claims data. Unemployment claims hit a record 6.867 million in March and have been stuck above their 665,000 peak during the 2007-2009 Great Recession.

"Even with some overstatement, millions of individuals are unemployed and receiving jobless benefits," said Nancy Vanden Houten, lead economist at Oxford Economics in New York.

The United States is in the midst of a fresh wave of COVID-19 infections, with 4.2 million new cases and more than 35,000 coronavirus-related deaths reported in November, according to a Reuters tally of official data.

More than $3 trillion in government COVID-19 relief helped millions of unemployed Americans cover daily expenses and companies keep workers on payrolls, leading to record economic growth in the third quarter. About 13.6 million people are due to lose government-funded unemployment benefits on Dec. 26.

In separate report on Thursday, the Institute for Supply Management (ISM) said its non-manufacturing activity index fell to a reading 55.9 last month. That as the lowest reading since May when the recovery started and followed 56.6 in October. The second straight monthly decrease pulled the index further below its 57.3 level in February.

Companies offered mixed views about business conditions and the economy. Restaurants said they continued to struggle with capacity constraints and logistics, while retailers complained they could not access electronics for their stores and employees which had become scarce as more people work from home.

Economists shrugged off another survey from Markit IHS showing the services sector hitting its highest level in November since March 2015. This survey has a shorter history compared to ISM. The two surveys use different methodologies.

"Risks are to the downside from new restrictions and closures that will weigh on demand and activity going forward," said Rubeela Farooqi, chief U.S. economist at High Frequency Economics in White Plains, New York.

Stocks on Wall Street were trading higher. The dollar fell against a basket of currencies. U.S. Treasury prices rose.

The claims report also showed the number of people receiving benefits after an initial week of aid fell 569,000 to 5.520 million in the week ending Nov. 21. But the decline in the so-called continuing claims was largely because many had exhausted their eligibility, limited to six months in most states.

A record 4.569 million workers filed for extended unemployment benefits in the week ending Nov. 14, up 59,732 from the prior week. At least 20.1 million people were receiving benefits under all programs in mid-November.

The labor market stagnation has been evident in other data.

The ISM reported this week its measure of factory employment contracted in November. The Federal Reserve's "Beige Book" report showed employment rising in all districts on or before Nov. 20, but the U.S. central bank noted "for most, the pace was slow, at best."

The reports support expectations that job growth slowed further in November. According to a Reuters survey of economists, the government's closely watched employment report on Friday is likely to show that farm payrolls increased by 469,000 jobs last month after rising 638,000 in October.

That would the smallest gain since the jobs recovery started in May and leave employment 9.609 million below its peak in February. Job growth peaked at a record 4.781 million in June.