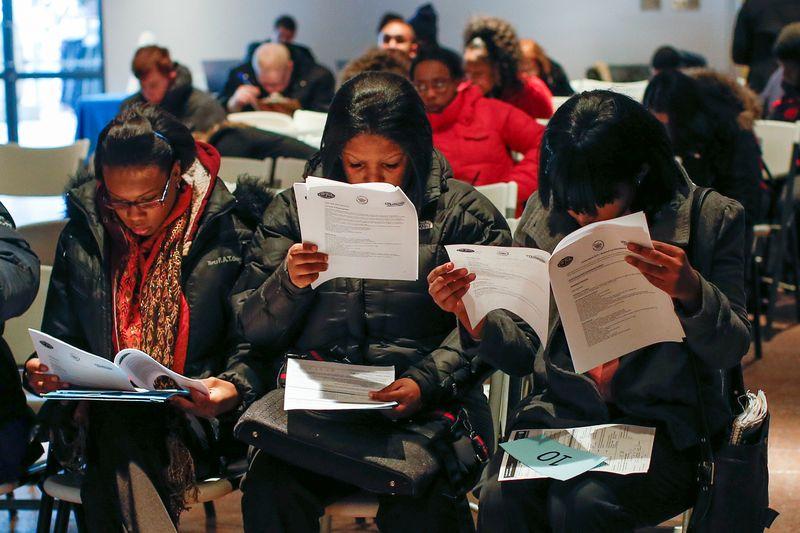 While other data on Thursday showed home sales racing to a more than 14-year high in September, economic activity is slowing heading into the fourth quarter. A measure of the economy's prospects increased moderately last month.

"There are still millions and millions on the nation's unemployment rolls because many of the jobs lost during the steepest downturn in economic history have not yet returned," said Chris Rupkey, chief economist at MUFG in New York. "Time will tell if the still-record number of people out of work will act as a brake on the economic recovery or whether the economy's fortunes depend more on the course of the virus."

Initial claims for state unemployment benefits dropped 55,000 to a seasonally adjusted 787,000 for the week ended Oct. 17. Data for the prior week was revised to show 56,000 fewer applications received than previously reported.

Economists polled by Reuters had forecast 860,000 claims in the latest week. California, the most populous state in the nation, resumed the processing of new applications after a two-week pause in late September to combat fraud.

Unadjusted claims fell 73,125 to 756,617 last week. Including a government-funded program for the self-employed, gig workers and others who do not qualify for the regular state jobless programs, 1.1 million people filed claims last week.

First-time claims have been stuck above their 665,000 peak during the 2007-09 Great Recession, though they have declined from a record 6.867 million in March. A more than $3 trillion rescue package early this year provided a lifeline for many businesses, allowing them to keep workers on payrolls. It also lifted economic activity from the recession, which started in February.

Though Democratic House of Representatives Speaker Nancy Pelosi and Treasury Secretary Steven Mnuchin are working out details of a new relief package, a deal is unlikely before the Nov. 3 presidential election amid stiff opposition in the Republican-controlled Senate.

With funding depleted, businesses, especially in the transportation industry, are either laying off or furloughing workers as demand remains subdued. More pain lies ahead amid a resurgence in new coronavirus

cases around the country, which could lead to state and local government restrictions or more people shunning establishments like restaurants and bars.

Stocks on Wall Street were trading lower. The dollar rose against a basket of currencies. U.S. Treasury prices fell.

Last week's claims report covered the period during which the government surveyed businesses for the nonfarm payrolls component of October's employment report. Payrolls increased by 661,000 jobs in September, the smallest gain since the jobs recovery started in May.

"Elevated initial jobless claims and the unwind of temporary Census hiring means we could get a soft payrolls number," said James Knightley, chief international economist at ING in New York. "A weak figure would probably be a more significant catalyst for politicians to deliver action on fiscal stimulus."

Though the claims report showed a further decline in the number of people on unemployment rolls in early October, that was in part due to millions exhausting their eligibility for benefits, which are limited to six months in most states.

The number of people receiving benefits after an initial week of aid declined 1.024 million to 8.373 million in the week ending Oct. 10, the lowest in nearly seven months.

At least 3.296 million workers filed for extended unemployment benefits in the week ending Oct. 3, up 509,823 from the prior week. Economists said claims for extended benefits, which expire in December, were understated.

"Today's report does not include 600,000 recipients in Florida listed on the state's dashboard, as well as workers in major states like Washington and Texas who report delays of up to one month between programs," said Andrew Stettner, senior fellow at The Century Foundation in New York.

A staggering 23.2 million people were on unemployment benefits at the beginning of October.

Unemployment has, however, disproportionately affected lower-wage workers. With many higher-paid employees working from home, there has been a housing market boom, with home sales jumping 9.4% to a seasonally adjusted annual rate of 6.54 million units in September, the highest level since May 2006.

But the housing market's strength is not enough to offset weakness elsewhere. The Conference Board's index of leading economic indicators rose 0.7% last month, slowing from a 1.4% increase in August.

That is consistent with economists' projections for slower growth in the fourth quarter after what is believed to have been a record performance in the third quarter.