By Lucia Mutikani WASHINGTON (Reuters) - The number of Americans filing new claims for unemployment benefits dropped to a one-year low last week, providing a powerful boost to an economy on the verge of stronger growth as the public health situation improves and temperatures rise. But the labor market is not out of the woods yet, with the weekly jobless claims report from the Labor Department on Thursday showing a staggering 18.953 million people were still receiving unemployment checks in early March. It will likely take years for a full recovery from the pandemic's scarring. 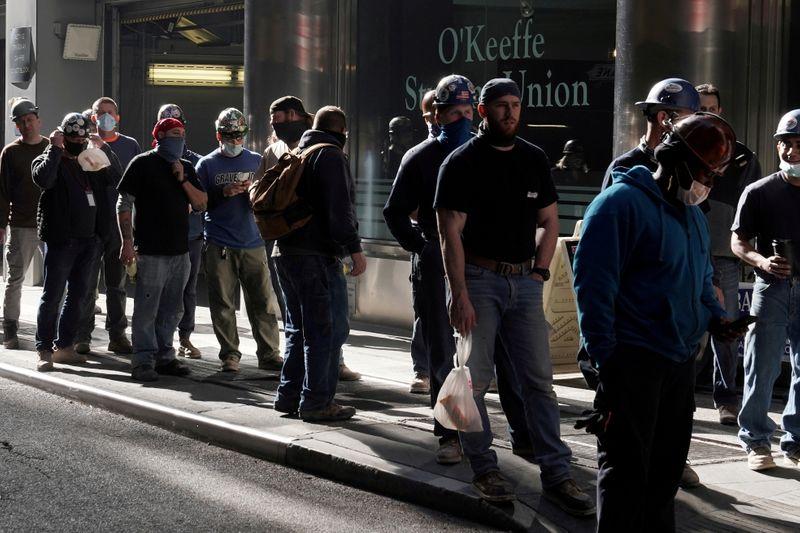 WASHINGTON (Reuters) - The number of Americans filing new claims for unemployment benefits dropped to a one-year low last week, providing a powerful boost to an economy on the verge of stronger growth as the public health situation improves and temperatures rise.

But the labor market is not out of the woods yet, with the weekly jobless claims report from the Labor Department on Thursday showing a staggering 18.953 million people were still receiving unemployment checks in early March. It will likely take years for a full recovery from the pandemic's scarring.

President Joe Biden in his first press conference highlighted the brightening economic outlook and drop in claims to their lowest level since the COVID-19 pandemic barreled across the United States just over a year ago.

"There are still too many Americans out of work, too many families are hurting and I still have a lot of work to do," Biden said. "But I can say to you the American people, help is here and hope is on the way."

Initial claims for state unemployment benefits tumbled 97,000 to a seasonally adjusted 684,000 for the week ended March 20, the lowest since mid-March. Data for the prior week was revised to show 11,000 more applications received than previously reported. Economists polled by Reuters had forecast 730,000 applications for the latest week.

Including a government-funded program for the self-employed, gig workers and others who do not qualify for the regular state programs, 898,534 people filed claims last week, dropping below one million for the first time since the pandemic started.

The decline was led by Ohio, which has been dogged by fraud, and Illinois. Claims shot up in the second week of March, likely as backlogs after severe winter storms in Texas and other parts of the densely populated South region were processed.

The deep freeze in the second half of February, which also gripped other parts of the country, depressed retail sales, homebuilding, production at factories, orders and shipments of manufactured goods last month.

Treasury Secretary Janet Yellen and Federal Reserve Chair Jerome Powell struck an optimistic note on the economy in testimony before lawmakers this week.

U.S. stocks were mixed. The dollar rose against a basket of currencies. U.S. Treasury prices were mostly lower.

But the massive fiscal stimulus, which extended government-funded unemployment aid, including a $300 weekly supplement, through Sept. 6, could keep claims elevated as some people reapply for benefits. Claims surged to a record 6.867 million in March 2020. They remain above their 665,000 peak during the 2007-2009 Great Recession. In a healthy labor market, claims are normally in a range of 200,000 to 250,000.

Employment is 9.5 million jobs below its peak in February 2020. Economists say it could take at least two years for the economy to recover all of the 22.4 million jobs lost in March and April last year.

Full labor market recovery could take even longer, with the labor force participation rate, or the proportion of working-age Americans who have a job or are looking for one, near a 47-year low. More than 4 million workers have dropped out of the labor force since February 2020.

The number of people receiving benefits after an initial week of aid decreased 264,000 to 3.870 million in the week ended March 13. More people are finding work, while others are exhausting their eligibility for benefits, limited to 26 weeks in most states.

About 5.6 million people were on extended benefits during the week ended March 6. Another 1.1 million were on a state program for those who have exhausted their initial six months of aid.

A separate report from the Commerce Department on Thursday showed gross domestic product increased at a 4.3% annualized rate in the fourth quarter, revised up from the 4.1% pace reported last month.

Goods-producing industries grew at a 6.1% rate, supported by gains in construction and the manufacturing of computer and electronic products as well as fabricated metal products.

Services industries expanded at a 4.9% pace, partly driven by finance and insurance, health care and social assistance, and professional, scientific and technical services. They were partially offset by decreases in accommodation and food services, utilities and educational services.

Government contracted at a 1.1% rate. Seventeen out of 22 industries contributed to fourth-quarter GDP growth. The economy grew at a record 33.4% rate in the third quarter.

The worst is likely over, with the economy forecast to grow by as much as a 7.5% rate in the first quarter. Growth this year could top 7%, which would be the fastest since 1984. The economy contracted 3.5% in 2020, the worst performance in 74 years.