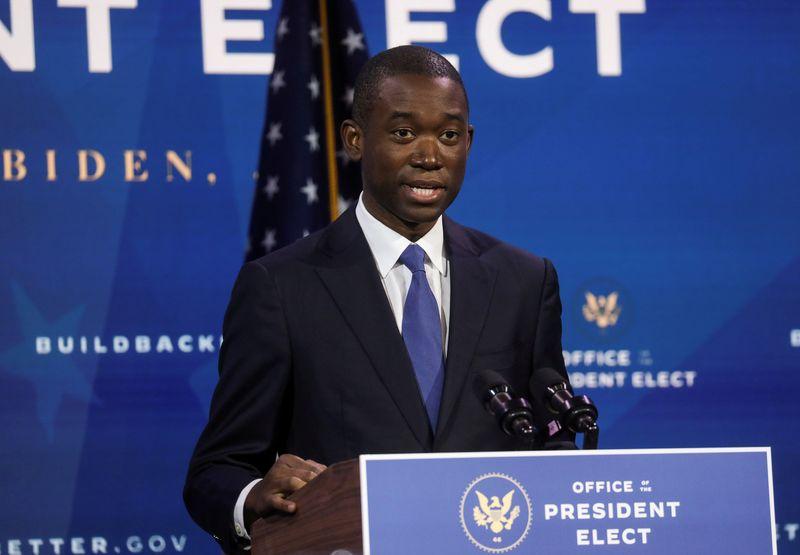 "China is our top strategic competitor," Adeyemo told a confirmation hearing before the Senate Finance Committee. "Where China is not willing to play on a level playing field, it's important that we hold them accountable in the international system," Adeyemo said, adding that taking such action with other countries would better "demonstrate to the Chinese that they're isolated when they violate the rules."

Echoing comments from other Biden officials, Adeyemo struck a hardline tone on Beijing, vowing to fight what he called "unfair economic practices" in China and elsewhere, while working to rectify economic inequality at home.

If confirmed as Treasury Secretary Janet Yellen's deputy, Adeyemo, 39, would play a key role in shaping U.S. economic policy on issues ranging from financial regulation to relief for everyday Americans and U.S. sanctions on foreign governments.

A former senior adviser at asset manager BlackRock Inc and the child of Nigerian immigrants, Adeyemo would be the first Black deputy secretary of the Treasury. He served as a top national security and economic adviser to Democratic President Barack Obama and held senior jobs at the Treasury.

Adeyemo underscored the importance of sanctions as a policy tool, and said Yellen had asked him to conduct a top-to-bottom review of U.S. sanctions policy, if confirmed.

"Treasury's tools must play a role in responding to authoritarian governments that seek to subvert our democratic institutions; combating unfair economic practices in China and elsewhere; and detecting and eliminating terrorist organizations that seek to do us harm," he told the committee.

Treasury oversees a host of sanctioning tools, including a ban on U.S. investment in alleged Chinese military companies that was introduced by former President Donald Trump.

The ban, which has prompted market confusion since being unveiled late last year, takes effect in November and investors are eager to learn if Biden will revoke it or clarify its scope and use it to go after top Chinese firms.

Adeyemo, drawing on his experience coordinating international economic policy in the Obama White House, said the United States needed a holistic approach on China that factored in national security.

"We can't separate the economic from the pure security; we have to look at it all because that's the way the Chinese look at these issues," he told the committee.

Adeyemo also called for targeted investments in critical U.S. industries and technologies, and policies to protect workers and companies from anti-competitive trade practices, signaling a hardline stance on trade issues.

The pandemic had exposed critical vulnerabilities in the U.S. supply chain for medical supplies and drugs that needed to be addressed, but the federal government should also review "how those threats can morph going into the future," Adeyemo said.

He defended Biden's $1.9 trillion coronavirus relief plan, and dodged questions about concerns that its passage could trigger inflation.

Adeyemo also backed Biden's plans to raise corporate tax rates, and said he would work with international partners to end "a race to the bottom" in corporate taxation.

Finance Committee Chairman Ron Wyden, a Democrat, and other members of the committee lauded Adeyemo's qualifications. Republican Senator Chuck Grassley said he expected Adeyemo to be confirmed in the job.