By Stephen Culp NEW YORK (Reuters) - Wall Street ended sharply higher at the close of a broad rally on Thursday, bouncing back from three straight days of selling on upbeat labor market data. All three major U.S. stock indexes notched solid gains, with the S&P 500 enjoying its biggest percentage gain in over a month. 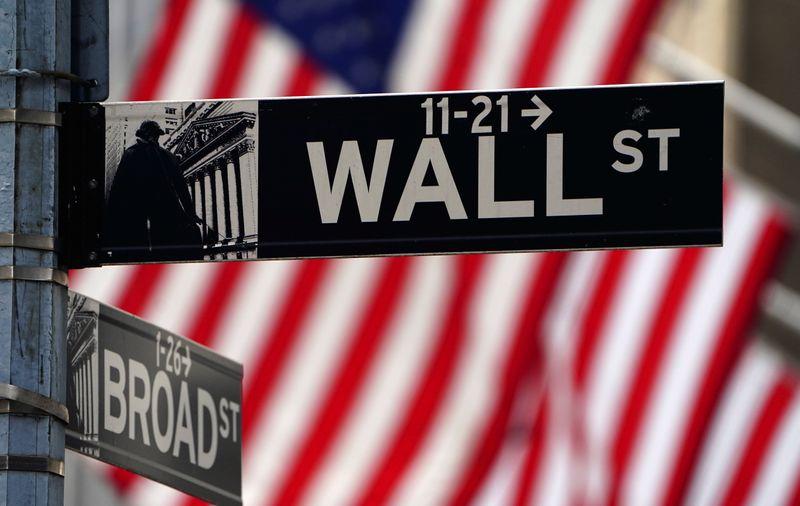 NEW YORK (Reuters) - Wall Street ended sharply higher at the close of a broad rally on Thursday, bouncing back from three straight days of selling on upbeat labor market data.

All three major U.S. stock indexes notched solid gains, with the S&P 500 enjoying its biggest percentage gain in over a month. The Nasdaq, weighed by Tesla Inc, picked up the rear.

Meanwhile, cyclical shares, which stand to benefit most from economic revival, enjoyed the biggest gains.

Recent economic data has prompted inflation fears as scarcity of both materials and workers threatens to send prices surging in the face of a demand boom.

"If this is a footrace, supply chains are still tying their shoes," said David Carter, chief investment officer at Lenox Wealth Advisors in New York. "But they will catch up with demand fairly quickly."

But on Thursday, investors appeared to be focusing on the glass-half-full side of the demand/supply equation.

This was evidenced by the outperformance of small caps, chips and transports, economically sensitive stocks that stand to gain as the United States emerges from the pandemic recession.

"Sectors and stocks that were hurt most significantly by yesterday's sell-off rebounded strongly today given that economic growth is expected to remain strong throughout the year and any inflation is likely to be temporary," Carter added.

New applications for unemployment insurance continue to fall, according to jobless claims data from the Labor Department that hit a 14-month low.

"The inflation boogeyman is back right on cue," Carter said. "And will continue to spook markets for the coming months."

But rising prices were widely anticipated, and the U.S. Federal Reserve has provided repeated assurances that it does not foresee those spikes morphing into sustained, long-term inflation.

Of the 11 major sectors in the S&P 500, 10 ended green, with industrials enjoying the largest percentage gain.

Boeing Co rose 0.8% after gaining approval from U.S. regulators for a fix of an electrical grounding issue.

Tesla continued its slide, dropping 3.1%, the heaviest drag on the Nasdaq, after boss Elon Musk doubled down on his sudden rejection of cryptocurrency bitcoin.

Advancing issues outnumbered declining ones on the NYSE by a 1.91-to-1 ratio; on Nasdaq, a 1.06-to-1 ratio favored advancers.

Volume on U.S. exchanges was 11.50 billion shares, compared with the 10.53 billion average over the last 20 trading days.