By Doina Chiacu and Marianna Parraga WASHINGTON (Reuters) - The U.S. 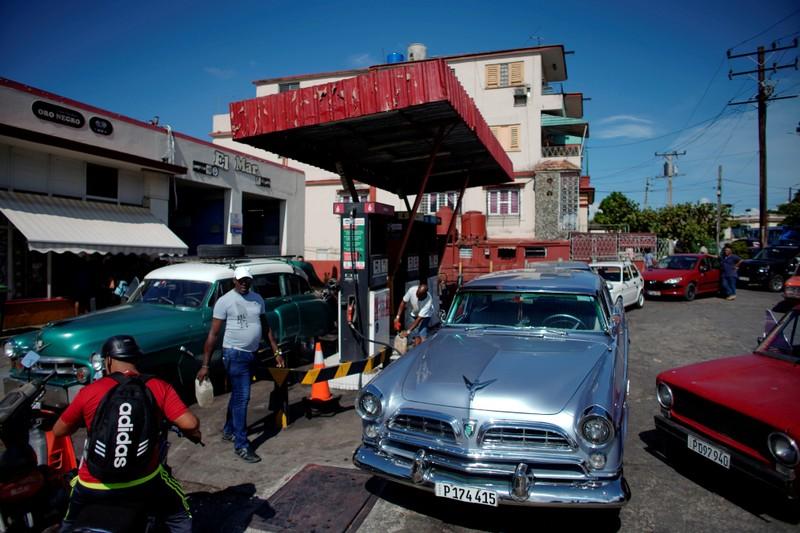 By Doina Chiacu and Marianna Parraga

WASHINGTON (Reuters) - The U.S. Treasury Department on Tuesday imposed sanctions on four maritime firms and vessels transporting Venezuelan oil to Cuba, amid an acute fuel scarcity in the island that is forcing people to line up for gasoline and public transport.

Despite tough U.S. measures against Venezuela's state-owned oil company PDVSA in January, Cuba's state-run oil import and export company Cubametales and other Cuba-based entities "have continued to circumvent sanctions by receiving oil shipments from Venezuela," the Treasury said in a statement.

"Venezuela's oil belongs to the Venezuelan people, and should not be used as a bargaining tool to prop up dictators and prolong the usurpation of Venezuelan democracy," Mnuchin said in the statement.

One of the sanctioned entities is Cyprus-based Caroil Transport Marine Ltd and three vessels it operates - the Carlota C, Sandino and Petion - for allegedly carrying Venezuelan oil and fuel to Cuba, a trade banned under previous U.S. measures.

Two Panama-based groups, Trocana World Inc and Tovase Development Corp, were sanctioned for owning the three tankers. A third Panamanian firm, Bluelane Overseas SA, was also sanctioned along with a vessel it owns called the Giralt.

"(The) U.S. government implements brutal and genocidal policy of tightening the blockade and financial persecution, in addition to obstructing oil shipments to Cuba," said Cuban President Miguel Diaz-Canel over Twitter.

Tankers Petion and Sandino were bought a decade ago by a Cuba-Venezuela transportation firm, Transalba, to carry Venezuelan oil to Cuba as part of a wide bilateral agreement signed by late Presidents Hugo Chavez and Fidel Castro.

"As a result of today's action, all property and interests in property of these entities, that are in the United States ... are blocked and must be reported to OFAC," the statement said.

The Office of Foreign Assets Control (OFAC) prohibits transactions by U.S. citizens or companies within the United States that involve interests in blocked or designated persons.

Though oil trade between Venezuela and Cuba has not ceased amid sanctions, the flow of PDVSA's oil has been insufficient to keep the Communist-ruled island well-supplied.

Cubans have faced long lines at gas stations and for public transportation amid what Diaz-Canel has described as a lack of vessels to receive fuel imports.

(Reporting by Doina Chiacu in Washington and Marianna Parraga in Mexico City; Additional reoprting by Nelson Acosta in Havana; Editing by Tom Brown and Matthew Lewis)