By Mayela Armas and Deisy Buitrago CARACAS (Reuters) - The Trump administration's sanctions on Venezuelan oil, aimed at driving President Nicolas Maduro from power, sent shockwaves around the world on Tuesday, triggering higher global oil prices and angry responses from China and Russia. The White House imposed restrictions on Venezuelan state-oil company PDVSA on Monday with the goal of curbing some $11 billion of crude exports from the OPEC member to the United States this year. The Kremlin condemned the sanctions as illegal interference, while China said they would lead to suffering for which Washington would bear responsibility. 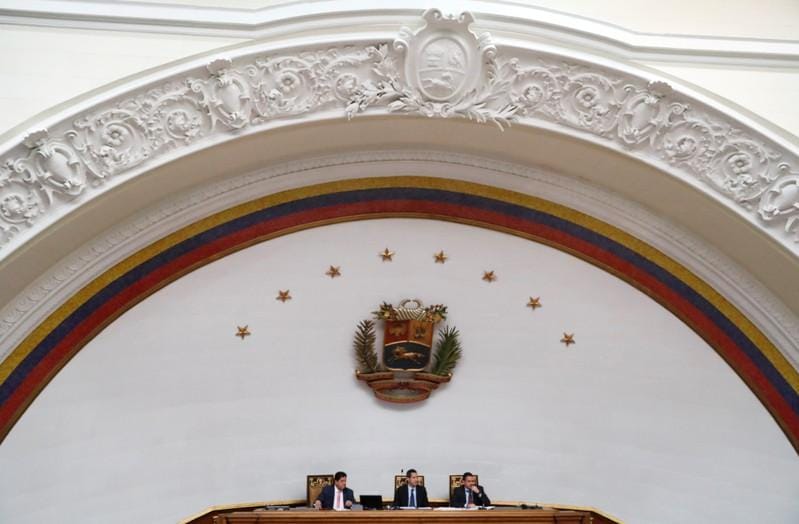 By Mayela Armas and Deisy Buitrago

The White House imposed restrictions on Venezuelan state-oil company PDVSA on Monday with the goal of curbing some $11 billion of crude exports from the OPEC member to the United States this year.

The Kremlin condemned the sanctions as illegal interference, while China said they would lead to suffering for which Washington would bear responsibility. Both countries have lent billions of dollars to Venezuela and are concerned about new stress on debt payments.

International Brent crude oil futures were up $1.31 at $61.24 a barrel by 1438 GMT, on track for the biggest monthly rise since April 2016, although gains were capped by abundant supply and signs of a slowing Chinese economy.

Maduro, a 56-year-old former union leader, was sworn in for a disputed second term this month after being re-elected last year in a vote denounced as illegitimate by the opposition and critics abroad.

Guaido said Venezuela can achieve a peaceful transition from Maduro and eventually hold free elections, speaking in an interview with CNN that aired on Tuesday.

"We are sure we can achieve a peaceful transition - a transition and eventually free elections," he said in the Spanish-language interview, which was translated into English.

"We must use great pressure for a dictator to leave, install a transitional government and have free elections."

At least 40 people are believed to have been killed in political violence last week, including 26 shot by pro-government forces, five killed in house raids and 11 during looting, U.N. human rights spokesman Rupert Colville said on Tuesday.

The new U.S. sanctions could cause problems for Venezuela when it came to servicing its sovereign debt to Russia, which stands at $3.15 billion, Russian Deputy Finance Minister Sergei Storchak told reporters.

"There will probably be problems. Everything now depends on the army, on the soldiers and how faithful they will be to their duty and oath. It is difficult, impossible to give a different assessment."

Ramping up the pressure, the U.S. State Department said on Tuesday it had certified Guaido's authority to control certain assets held by the Federal Reserve Bank of New York or any other U.S.-insured banks.

The certification, given on Friday, applies to certain property held in accounts belonging to the Venezuelan government or its central bank.

In Geneva, senior U.S. and Venezuelan diplomats traded jibes at a disarmament conference. Venezuela's ambassador, Jorge Valero, said the Trump administration was preparing a "military invasion" and questioned whether Washington had the moral authority to "impose a diktat" on Caracas.

PDVSA responded by ordering customers with tankers waiting to load crude destined for the United States to prepay, according to three sources with knowledge of the decision. Such prepayment could be in violation of the sanctions, setting the stage for a standoff at the ports.

In a defiant national broadcast on Monday night, Maduro said he would take legal action to defend Citgo Petroleum Corp, PDVSA's U.S. refining subsidiary, which he said the United States was trying to steal. He also pledged to retaliate, but did not announce any specific measures.

"We will provide the reciprocal and convincing response needed to defend Venezuela's interests in due time," Maduro said.

The loss of revenue from the United States, the No. 1 buyer of Venezuelan crude, was sure to further hamper the government's ability to import basic goods like food and medicine, exacerbating a humanitarian crisis that has prompted more than 3 million people to leave the country in recent years.

"The relevant country's sanctions on Venezuela will lead to the deterioration of conditions of people's lives," Chinese Foreign Ministry spokesman Geng Shuang told a regular news briefing in Beijing, referring to the United States.

Guaido, who argues that Maduro usurped the presidency when he began a second six-year term on Jan. 10 following last May's election, has moved to set up new boards of directors for Citgo and PDVSA, which could allow his parallel government to collect money held in escrow accounts in the United States.