By David Lawder WASHINGTON (Reuters) - As the debate rages over how to safely reopen U.S. schools this autumn, one factor weighs heavily: the nation's 98,000 public 'K-12' schools are a cornerstone of the economy, and a massive jobs engine. Nearly 51 million American kids attend https://nces.ed.gov/fastfacts/display.asp?id=372#PK12_enrollment public elementary, middle and high schools, compared to about six million in private schools 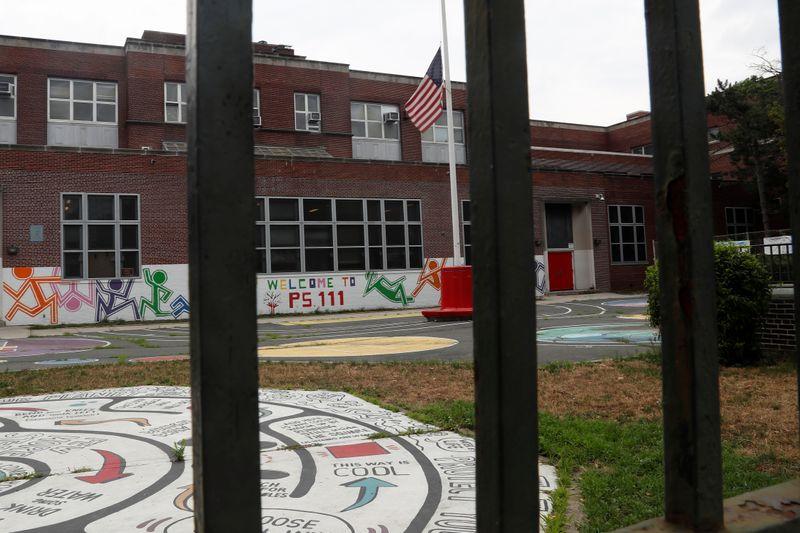 WASHINGTON (Reuters) - As the debate rages over how to safely reopen U.S. schools this autumn, one factor weighs heavily: the nation's 98,000 public "K-12" schools are a cornerstone of the economy, and a massive jobs engine.

With a total workforce of about eight million Americans before the pandemic, kindergarten through 12th grade public education is also one of the largest U.S. employment sectors, exceeding construction, hospitals, finance and insurance and transportation and warehousing.

Total expenditures for these schools were $721 billion during the 2018 fiscal year, according to U.S. Census Bureau data https://www.census.gov/data/tables/2018/econ/school-finances/secondary-education-finance.html.

That is more than the U.S. Defense Department's $671 billion budget that year, or the Pentagon's $705 billion request for fiscal 2021.

The Trump administration, including U.S. Education Secretary Betsy DeVos, has been pushing for schools to physically reopen in the fall as U.S. coronavirus deaths near 140,000 https://graphics.reuters.com/HEALTH-CORONAVIRUS-USA/0100B5K8423/index.html, the world's highest. But it has not embraced any blueprint, including federal health guidelines, for how to do that safely.

Parents, teachers and local governments are expressing growing concern, after a string of coronavirus outbreaks at day care and summer school classrooms around the country.

The White House has little real sway over whether public schools will reopen - just about 8% of U.S. K-12 public school funding comes from the federal government, with the remainder split fairly evenly between state and local governments, the Census Bureau data shows.

The Department of Education says public school spending is heavily skewed toward salaries and benefits, which made up 80% of the per-pupil total spending of $12,612 in 2018. About 11% goes to purchased services and 7% to supplies.

Maintaining these jobs is particularly important for local communities because of the economic multiplier effect, said Elise Gould, senior economist at the Economic Policy Institute in Washington. That $721 billion in public school spending in 2018 translated to about $1.08 trillion in direct GDP output, she calculates, not including the economic benefits of better-educated workers.

Although it rebounded somewhat in June, local government education employment is still down by 667,000 since March, when schools shifted largely to online instruction, Bureau of Labor Statistics data show.

That is nearly double the 351,000 jobs lost in local school districts after the 2008-2009 financial crisis, when tax revenues and budgets withered.

The losses could increase without federal aid to state and local governments, Gould said. "They're faced with austerity and severe cuts and education is one of the places they look."

Many of those laid off, including teaching assistants, counselors, and maintenance workers, are likely supported by enhanced unemployment benefits, scheduled to expire https://www.reuters.com/article/us-usa-economy-cliff-analysis/a-cash-cliff-spells-trouble-for-u-s-unemployed-and-everyone-else-idUSKBN24014U at the end of July.

WHO'S WATCHING THE KIDS?

Online-only K-12 education or closed schools may pull parents, and especially women, out of the workforce, particularly those with very young children that need more supervision.

According to a recent McKinsey & Co report https://www.mckinsey.com/industries/social-sector/our-insights/safely-back-to-school-after-coronavirus-closures# on reopening schools, about 26.8 million Americans, or about 16% of the workforce, are dependent on child care in order to work.

Physically opening schools a few days a week, as has been proposed in New York City, will not help much without more federal aid for child care, said Bruce Fuller, a professor of education and public policy at the University of California-Berkeley.

"This cost would be offset by the surge in labor supply and income, as parents flock back to work, helping to jump-start the economy," Fuller said.

DeVos told CNN on Sunday that because children contract the virus at a far lower rate than adults, there is little danger for them to be back in schools.

"We know that schools across the country look very different and that there's not going to be a one-size-fits-all approach to everything," DeVos told Fox News Sunday.

Despite the threat to their jobs, teachers are not pushing to reopen schools. A USA Today poll https://www.usatoday.com/story/news/education/2020/05/26/coronavirus-schools-teachers-poll-ipsos-parents-fall-online/5254729002 at the end of May revealed that one in five teachers said they were unlikely to return to their classrooms in the fall.

A Kaiser Family Foundation study https://www.kff.org/coronavirus-covid-19/issue-brief/how-many-teachers-are-at-risk-of-serious-illness-if-infected-with-coronavirus found that nearly 1.5 million U.S. teachers, almost one in four, were at greater risk of serious illness if infected with the coronavirus due to age or existing health conditions.