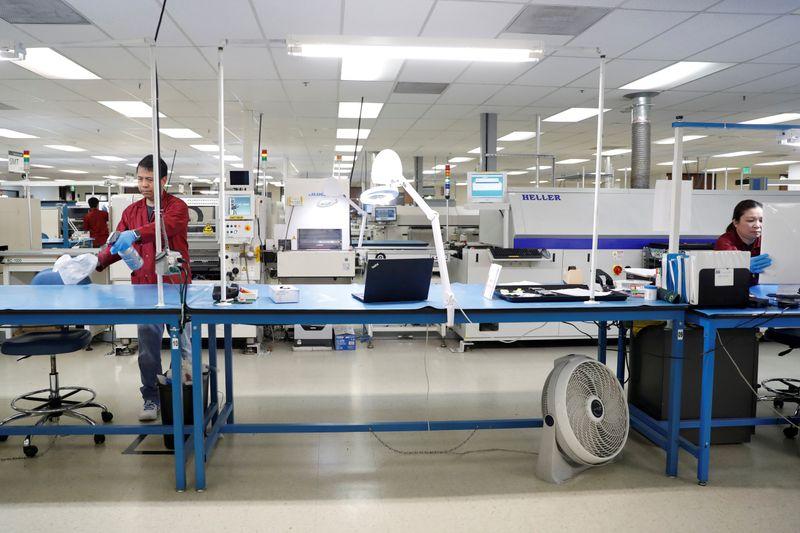 WASHINGTON (Reuters) - U.S. producer prices barely rose in November, supporting views that inflation would remain benign in the near term as a flare-up in new COVID-19 infections restrains the labor market and demand for services.

While other data on Friday showed a surprise improvement in consumer sentiment early in December, that largely reflected increased optimism among Democrats and Independents following Joe Biden's electoral victory over President Donald Trump.

That is unlikely to translate into robust consumer spending, given business restrictions related to the coronavirus outbreak and the accompanying job losses. Millions of unemployed Americans are set to lose their government-funded benefits on Dec. 26, with Congress struggling to agree on another pandemic relief package.

"We saw a similar partisan boost to confidence following the 2016 election which was not followed by a spike in consumption, so we doubt this apparent rise in confidence signals a jump in spending either," said Michael Pearce, a senior U.S. economist at Capital Economics in New York.

The producer price index for final demand edged up 0.1% last month after increasing 0.3% in October, the Labor Department said. That was the smallest gain since April.

In the 12 months through November, the PPI advanced 0.8% after increasing 0.5% in October.

A 0.4% increase in the price of goods accounted for the rise in the PPI. Goods increased 0.5% in October. Services were unchanged after rising 0.2% in October. Economists polled by Reuters had forecast the PPI gaining 0.2% in November and rising 0.8% on a year-on-year basis.

The United States is in the midst of a fresh wave of coronavirus infections, pushing the number of confirmed cases to more than 15 million and deaths to over 289,740 since the pandemic started. New strict stay-at-home orders went into effect in California this week. Other states and local governments have also imposed restrictions on businesses.

While the coronavirus pandemic has raised prices of some goods because of supply constraints, it has hurt demand for services like travel and dining out, keeping inflation in check. Millions of people are either underemployed or out of work, limiting wage inflation.

In a separate report on Friday, the University of Michigan said its consumer sentiment index increased to 81.4 early this month from a final reading of 76.9 in November. Sentiment remains well below its pre-pandemic level. Economists had forecast the index steady at 76.5.

Sentiment improved among Democrats and Independents, but fell among Republicans. Consumers expected inflation to moderate significantly in the year ahead. Inflation expectations over the next five years were steady.

"The trend in inflation in the near term is likely to be subdued given ample excess capacity and renewed pressure on demand from new restrictions to contain a resurgence of Covid-19 outbreaks," said Rubeela Farooqi, chief U.S. economist

Stocks on Wall Street were trading lower. The dollar gained versus a basket of currencies. U.S. Treasury prices rose.

Other details of the PPI report were also softer. Excluding the volatile food, energy and trade services components, producer prices inched up 0.1%. The so-called core PPI climbed 0.2% in October. In the 12 months through November, the core PPI gained 0.9% after rising 0.8% in October.

Inflation is running below the Federal Reserve's 2% target, a flexible average. The government reported on Thursday that consumer prices increased 0.2% in November.

"There are no factory inflation pressures building, either due to shortages or to stronger manufacturing demand, that could possibly lead to more inflation at the consumer level," said Chris Rupkey, chief economist at MUFG in New York.

Despite the soft inflation backdrop, economists do not anticipate a deflation, a decline in the general price level that is harmful during a recession as consumers and businesses may delay purchases in anticipation of lower prices.

Wholesale food prices rose 0.5% in November after accelerating 2.4% in October. The cost of residential electricity, natural gas and tobacco products increased. But gasoline prices tumbled 1.9%. There were also decreases in the cost of pharmaceutical preparations.

Core goods prices rose 0.2% after being unchanged in October. Margins for final demand trade services, which measure changes in margins received by wholesalers and retailers, fell 0.3%, helping to restrain services.