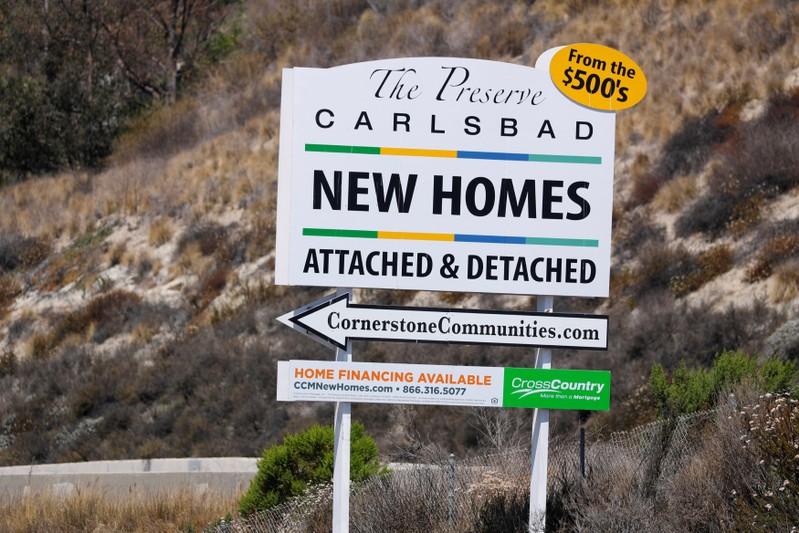 WASHINGTON (Reuters) - Sales of new U.S. single-family homes fell to an eight-month low in June and data for the prior month was revised sharply lower, the latest indications that the housing market was slowing down.

The moderation in housing is largely driven by supply constraints, but there are concerns that persistent weakness could eventually spill over to the broader economy, which appeared to have grown robustly in the second quarter.

Housing has been plagued by rising building material costs and shortages of land and labor, which have put a squeeze on the supply of homes available for sale and kept prices elevated.

"The fallout could be weaker sales of consumer durable goods and furnishings that go into these new homes later on this year," said Chris Rupkey, chief economist at MUFG in New York. "The second quarter could well prove to be the high-water mark for growth this year."

The Commerce Department said on Wednesday new home sales decreased 5.3 percent to a seasonally adjusted annual rate of 631,000 units last month, the lowest since October 2017. May's sales pace was revised down to 666,000 units from the previously reported 689,000.

Economists polled by Reuters had forecast new home sales, which account for about 10 percent of housing market sales, falling 2.8 percent to a pace of 670,000 units in June.

"The housing market is flattening, and may have peaked for this expansion," said Robert Frick, corporate economist for Navy Federal Credit Union in Vienna, Virginia.

The housing market has underperformed the economy this year. According to a Reuters survey of economists, the economy likely grew at a 4.1 percent annualized rate in the second quarter, which would be double the 2.0 percent pace set in the January- March period.

Economists are forecasting no contribution from housing to gross domestic product in the second quarter. Residential investment subtracted from GDP growth in the first quarter.

The government will publish its snapshot of second-quarter GDP on Friday.

"We do not expect housing to be an important driver of economic activity going forward but neither do we expect a retrenchment," said John Ryding, chief economist at RDQ Economics in New York.

Higher mortgage rates have also raised the cost for owning a home, especially for first-time buyers, and may be discouraging some owners from selling their properties. A report from the Mortgage Bankers Association showed applications for loans to purchase a home fell 1.0 percent last week.

The PHLX housing index fell nearly 2 percent, while the overall U.S. stock market was mixed. The dollar was little changed against a basket of currencies. Prices for U.S. Treasuries rose.

New home sales in the South, which accounts for the bulk of transactions, declined 7.7 percent in June. Sales fell 5.2 percent in the West and tumbled 13.4 percent in the Midwest. They surged 36.8 percent in the Northeast to a 10-1/2-year high, however.

"That prices were lower likely shows the dominance of homes sold in the south, where prices are lower, than a lack of demand," said Navy Federal Credit Union's Frick.

While the stock of new homes on the market increased to a more than nine-year high of 301,000 units in June, supply is just over half of what it was at the peak of the housing market boom in 2006. A survey last week showed single-family homebuilders complaining in July that "they continue to be burdened by rising construction material costs."

The Trump administration in April 2017 imposed anti-subsidy duties on imports of Canadian softwood lumber, which builders say have significantly raised the cost of a new home.

At June's sales pace it would take 5.7 months to clear the supply of houses on the market, the most in 10 months and up from 5.3 months in May. Nearly two-thirds of the houses sold last month were either under construction or yet to be built.