By Lucia Mutikani WASHINGTON (Reuters) - U.S. factory output rose by the most in more than 74 years in June as motor vehicle production accelerated amid the reopening of businesses, but the nascent recovery in manufacturing activity was overshadowed by surging new COVID-19 infections. That was underscored by other data Wednesday showing factory activity in New York state rising in July, though manufacturers were less optimistic about business conditions over the next six months 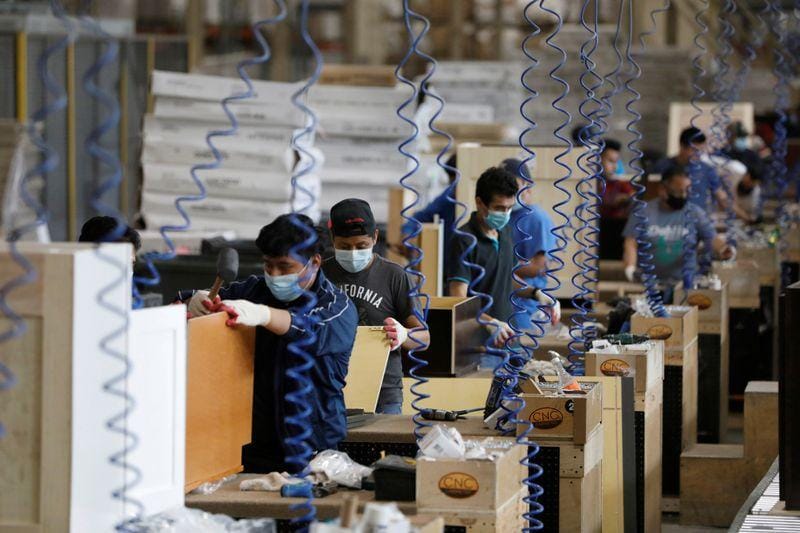 WASHINGTON (Reuters) - U.S. factory output rose by the most in more than 74 years in June as motor vehicle production accelerated amid the reopening of businesses, but the nascent recovery in manufacturing activity was overshadowed by surging new COVID-19 infections.

That was underscored by other data Wednesday showing factory activity in New York state rising in July, though manufacturers were less optimistic about business conditions over the next six months. Businesses have resumed operations after being shuttered in mid-March in an effort to slow the spread of the coronavirus.

But there has been a resurgence in new infections of the respiratory illness, especially in the highly populated South and West, prompting some authorities in these regions to either shut down businesses again or pause reopenings. The economy slipped into recession in February.

The Federal Reserve said manufacturing production jumped 7.2% last month, the largest gain since March 1947, after climbing 3.8% in May. Despite two straight monthly increases,

factory output was 11.1% below its level in February.

Production at factories contracted at a 47.0% annualized rate in the second quarter after falling at a 5.5% pace in the January-March period. Manufacturing, which accounts for 11% of the U.S. economy, is also being constrained by the fallout from the Trump administration's trade war with China.

Global supply chains remain fragile and demand for crude oil is weak, leading to lower prices that are undercutting spending by oil producers on drilling and shaft exploration equipment.

In a separate report on Wednesday, the New York Fed said its Empire State current business conditions index rebounded to a reading of 17.2 in July from -0.2 in June. That was the first positive reading since February.

Still, manufacturers in the region were less upbeat about the outlook over the next six months. The survey's measure of future business conditions fell 18 points to a reading of 38.4. There were decreases in gauges of future new orders and shipments. Though employment and capital spending measures rose, they remained relatively low.

Stocks on Wall Street were trading higher on promising early data for a potential COVID-19 vaccine and a strong quarterly performance by Goldman Sachs. The dollar fell against a basket of currencies. U.S. Treasury prices were mixed.

Manufacturing production in June was boosted by a 105.0% surge in the output of motor vehicles and parts, which was on top of a 120% rise in May. Still, auto output remained nearly 25% below its pre-pandemic level.

Excluding autos, manufacturing production increased 3.9%. There were increases in the production of long-lasting consumer goods, business, defense and space equipment.

The surge in manufacturing output combined with a 4.2% increase in utilities to offset a 2.9% slump in mining, leading to a 5.4% rise in industrial production in June. That followed a 1.4% gain in May. Oil and gas well drilling fell 18.0% and was about 70% below its year-earlier level.

Industrial production contracted at a 42.6% rate in the second quarter, the largest decline since World War II, after decreasing at a 6.8% pace in the first quarter.

"There is little incentive to invest in capex as yet," said James Knightley, chief international economist at ING in New York. "This is likely to hold back the broader recovery and is a key factor why we doubt the U.S. economy will recover all of its lost output much before the end of 2022."

Inflation is likely to remain weak, though the risk of deflation has significantly diminished. In a third report on Wednesday, the Labor Department said import prices accelerated 1.4% last month, the largest increase since March 2012, after rising 0.8% in May. In the 12 months through June, import prices fell 3.8% after dropping 6.2% in May.

Deflation, a decline in the general price level, is harmful during a recession as consumers and businesses may delay purchases in anticipation of lower prices.