By David Shepardson and Andrea Shalal WASHINGTON (Reuters) - The United States and Japan are working on a quid pro quo deal involving agriculture and autos that could be agreed by President Donald Trump and Japanese Prime Minister Shinzo Abe when they meet in New York in September, three industry sources familiar with the discussions said on Tuesday. An auto industry official said the deal could involve Japan offering U.S. farmers new access to its market in return for Washington reducing tariffs on certain Japanese auto parts 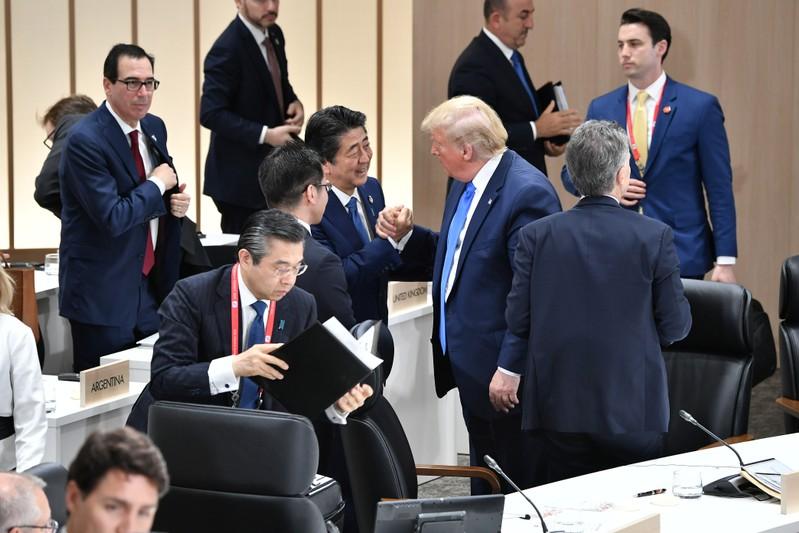 WASHINGTON (Reuters) - The United States and Japan are working on a quid pro quo deal involving agriculture and autos that could be agreed by President Donald Trump and Japanese Prime Minister Shinzo Abe when they meet in New York in September, three industry sources familiar with the discussions said on Tuesday.

An auto industry official said the deal could involve Japan offering U.S. farmers new access to its market in return for Washington reducing tariffs on certain Japanese auto parts. He emphasized the talks remain fluid, however.

Such a deal would give Abe a win on autos, while helping Trump shore up support among farmers, an important constituency ahead of the 2020 presidential election.

A second source familiar with the discussions said the Trump administration was looking for increased access for U.S. beef and pork products.

Improved access to the Japanese market would help the United States compete with members of the Comprehensive and Progressive Agreement for Trans-Pacific Partnership, a trade agreement among Australia, Brunei, Canada, Chile, Japan, Malaysia, Mexico, New Zealand, Peru, Singapore and Vietnam.

One of Trump's first acts as president was to pull the United States out of that agreement's predecessor, which killed the deal.

Trump and Abe discussed trade in Osaka, Japan, during a Group of 20 meeting last month, but no details of their talks were released. Politico on Tuesday reported some sort of a deal was possible in September.

Although Abe is one of Trump's closest allies on the world stage, the U.S. president has threatened to impose steep tariffs on car imports from Japan and the European Union to even out what he calls unfair trade imbalances. Abe is eager to see the threat taken off the table.

Trump has repeatedly said he is unhappy with Japan's trade surplus with the United States, which was $67.6 billion in goods in 2018, with nearly two-thirds coming from auto exports, according to U.S. figures. Trump has threatened to impose 25% tariffs on imported Japanese cars on national security grounds but delayed those as trade talks continue.

The two leaders agreed last September to discuss an arrangement that protects Japanese automakers from further tariffs while negotiations are under way.

The deal would not require congressional approval since the U.S. president can eliminate or reduce tariffs on products that have a duty of less than 5% duty, and most auto parts tariffs are roughly 3-6%.

Asked about the possibility of such a deal, a Japanese government official declined to comment but said working level discussions on trade were under way.

The official said no significant progress would come until after July 21 elections for Japan's upper house of parliament.

"We have a mutual understanding that we should find common ground so we can find a final settlement," the official told Reuters.

The U.S. Trade Representative's office had no immediate comment on the possibility of a deal. A U.S. Commerce Department official also declined to comment.