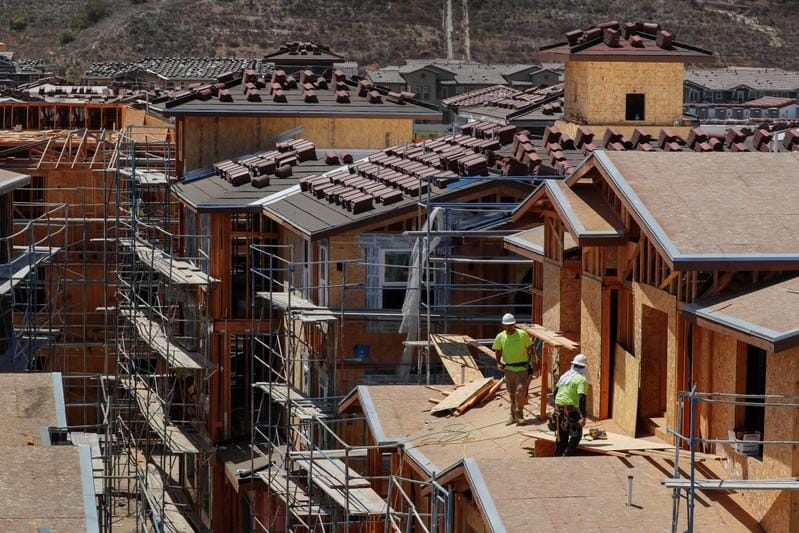 WASHINGTON (Reuters) - U.S. homebuilding fell for a third straight month in July amid a steep decline in the construction of multi-family housing units, but a jump in permits to a seven-month high offered hope for the struggling housing market.

Declining mortgage rates have done little to stimulate the housing market as land and labor shortages constrain builders' ability to construct sought-after lower-priced homes. Housing and manufacturing are the weakest spots in the economy, which this week has seen a heightened risk of recession.

"After almost a year, lower mortgage rates have done nothing to boost residential housing construction," said Chris Rupkey, chief economist at MUFG in New York. "Housing construction remains the weak link for new investment in the economy and will keep GDP growth slower than it would have been."

Housing starts dropped 4.0% to a seasonally adjusted annual rate of 1.191 million units last month, the Commerce Department said on Friday. Data for June was revised down to show starts falling to a pace of 1.241 million units, instead of dropping to a rate of 1.253 million units as previously reported.

Economists polled by Reuters had forecast housing starts would edge up to a pace of 1.257 million units in July.

The 30-year fixed mortgage rate has dropped to 3.60% from a peak of 4.94% in November, according to data from mortgage finance agency Freddie Mac.

Homebuilders say lower borrowing costs have not boosted the housing market because mortgage rates have declined due to economic uncertainty. The Federal Reserve cut interest rates last month for the first time since 2008, citing growing risks to the economy from the Trump administration's bitter trade war with China, as well as slowing global growth.

Financial markets expect the U.S. central bank will lower its short-term interest rate by another 25 basis points because of the ongoing trade impasse, which this week contributed to an inversion of the U.S. Treasury yield curve and unleashed a sharp sell-off on global stock markets.

The U.S. 2-year Treasury note yield rose above the 10-year note yield on Wednesday for the first time since June 2007, signaling a recession was looming.

Worries tied to the trade tensions and Fed rate cut weighed on consumer sentiment in early August, another report showed on Friday. The University of Michigan said its consumer sentiment index fell to 92.1 early this month, the lowest reading since January, from 98.4 in July. The survey's current conditions measure dropped to its lowest level since late 2016.

According to the University of Michigan, monetary and trade policies have heightened consumer uncertainty about their future financial prospects. Noting that declining borrowing costs have long been associated with the start of an economic downturn, it said the impact of last month's rate cut on consumers was "to increase apprehensions about a possible recession."

Against the backdrop of growing recession risks, consumer sentiment data will be closely watched in the coming months. Consumer spending is the economy's main pillar. Retail sales surged in July.

"The big decline in the University of Michigan consumer confidence index is the first indication that the U.S. consumer might not save the world economy after all," said Paul Ashworth, chief economist at Capital Economics in Toronto. "Even though consumption has been unusually strong in recent months, there is no guarantee that trend will continue."

U.S. Treasury prices were trading lower, lifting the yield on the benchmark 10-year note from three-year lows. That led to a broad rise in stocks on Wall Street. The dollar was little changed against a basket of currencies.

Single-family homebuilding, which accounts for the largest share of the housing market, increased 1.3% to a rate of 876,000 units in July, the highest level in six months.

Single-family housing starts rose in the Northeast, West and Midwest. But homebuilding dropped 3.9% in the populous South, likely disrupted by Tropical Storm Barry, which drenched Louisiana in the middle of July.

Building permits surged 8.4%, the largest gain since June 2017, to a rate of 1.336 million units in July. Last month's surge is a positive development for permits, which have been weak this year. Much of the decline in permits has been concentrated in the single-family housing segment.

A survey on Thursday showed confidence among homebuilders nudged up in August. Builders reported firm demand for single-family homes but said they "continue to struggle with rising construction costs stemming from excessive regulations, a chronic shortage of workers and a lack of buildable lots."

Residential investment has contracted for six straight quarters, the longest such stretch since the 2007-2009 Great Recession. Growth estimates for the third quarter range from a 1.5% annualized pace to a 2.1% rate. The economy grew at a 2.1% rate in the second quarter, decelerating from the first quarter's 3.1% pace.

"A dearth of cheap lots and persistent labor shortages are constraining builders, especially for homes costing less than $300,000, which have the greatest demand," said Robert Frick, corporate economist with Navy Federal Credit Union in Vienna, Virginia.

Permits to build single-family homes increased 1.8% to a rate of 838,000 units in July, the highest level in eight months. Still, permits continue to lag housing starts, which suggests single-family homebuilding could remain tepid.

Housing completions increased 7.2% to 1.250 million units last month. Realtors estimate that housing starts and completion rates need to be in a range of 1.5 million to 1.6 million units per month to plug the inventory gap. The stock of housing under construction fell 0.5% to 1.134 million units in July.