By Lucia Mutikani WASHINGTON (Reuters) - U.S. homebuilding tumbled from more than a 12-year high in September, but single-family home construction rose for a fourth straight month, suggesting the housing market remains supported by lower mortgage rates even as the economy is slowing. The moderation in economic growth was underscored by other data on Thursday showing manufacturing output falling last month and factory activity in the mid-Atlantic region decelerating in October 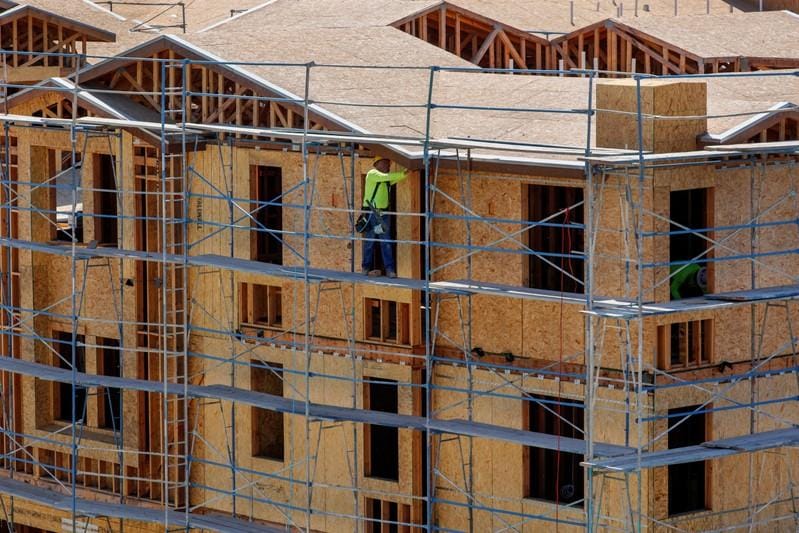 WASHINGTON (Reuters) - U.S. homebuilding tumbled from more than a 12-year high in September, but single-family home construction rose for a fourth straight month, suggesting the housing market remains supported by lower mortgage rates even as the economy is slowing.

The moderation in economic growth was underscored by other data on Thursday showing manufacturing output falling last month and factory activity in the mid-Atlantic region decelerating in October. The economy is being constrained by a 15-month trade war between the United States and China, which has dented business sentiment and caused a drop in capital expenditures.

Ironically, manufacturing has borne the brunt of the trade tariffs, which the White House argues are necessary to protect industries from what it says is unfair foreign competition. Other parts of the economy are also starting to show cracks from the trade war, with retail sales dropping in September for the first time in seven months and services sector growth slowing.

Many economists expect the Federal Reserve to cut interest rates for the third time later this month to limit the drag on the economy from the trade war and keep the longest expansion on record, now in its 11th year, on track.

"It inches them forward to taking out a little more insurance to help support the economy that continues to face the headwinds of reduced world trade from tariffs," said Chris Rupkey, chief economist at MUFG in New York.

Housing starts declined 9.4% to a seasonally adjusted annual rate of 1.256 million units last month as construction in the volatile multi-family housing segment dropped, the Commerce Department said. Data for August was revised higher to show homebuilding accelerating to a pace of 1.386 million units, which was the highest level since June 2007, instead of marching to a rate of 1.364 million units as previously reported.

The housing market, the most sensitive sector to interest rates, has perked up in recent months as mortgage rates have plunged from last year's multi-year highs.

But the sector, which accounts for about 3.1% of the economy, continues to be hampered by land and labor shortages. A survey on Wednesday showed confidence among homebuilders jumped to a more than 1-1/2-year high in October.

The 30-year fixed mortgage rate has dropped more than 135 basis points to an average of 3.57%, according to data from mortgage finance agency Freddie Mac.

Economists expect a mild rebound in residential investment in the third quarter after it contracted for six straight quarters, the longest such stretch since the 2007-2009 recession.

U.S. financial markets were little moved by the data as investors focused on news that Britain had clinched an eleventh-hour deal on its exit from the European Union. The dollar weakened against a basket of currencies, while stocks on Wall Street rose. U.S. Treasury prices fell.

In a separate report on Thursday, the Fed said manufacturing production fell 0.5% last month as a strike by about 48,000 workers at General Motors hammered motor vehicle output. Production at factories increased 0.6% in August.

Manufacturing has also been hurt by an inventory glut, especially in the automobile sector, and design troubles at Boeing. The fading boost from last year's $1.5 trillion tax cut package is also compounding manufacturing's woes.

Though President Donald Trump announced a temporary truce in the trade war last Friday, which delayed additional tariffs that were due this month, economists saw little change in fortunes at factories without all import duties being rolled back.

Manufacturing production rebounded at a 1.1% rate in the third quarter after declining for two straight quarters. While the increase in the so-called hard data could offer hope that the manufacturing downturn could be close to an end, factory surveys, which are considered leading indicators, remain weak.

"As we would not expect this disconnect to last for long, there remains a downside risk that hard data could weaken further," said Veronica Clark, an economist at Citi in New York.

In a third report, the Philadelphia Fed said its business conditions index for the region that covers eastern Pennsylvania, southern New Jersey and Delaware fell to a reading of 5.6 in October from 12.0 in September.

The survey's measures of new orders and employment rose. Its six-month business conditions index jumped to a reading of 33.8 this month from 20.8 in September. The survey's six-month capital expenditures index increased to 36.4 from a reading of 25.9 in the prior month.

Despite the slowing economy, companies are holding on to their workers. In a fourth report, the Labor Department said initial claims for state unemployment benefits increased 4,000 to a seasonally adjusted 214,000 for the week ended Oct. 12.

Claims rose 4,000 between the September and October survey period, suggesting little change in the moderate pace of job growth this month. But the General Motors strike could weigh on payrolls in October.

Striking workers, who did not receive a paycheck during the payrolls survey period, are counted as unemployed. GM and the United Auto Workers union reached a tentative deal on Wednesday to end the month-long strike.

"The claims data may be sending an overly optimistic signal about the upcoming October payroll report," said Daniel Silver, an economist at JPMorgan in New York. "The near 50,000 workers that have been on strike recently likely will be removed from the October payroll count."