By Lucia Mutikani WASHINGTON (Reuters) - Sales of new U.S. single-family homes fell from near an 11-1/2-year high in April as prices rebounded and manufacturing activity hit its lowest level in almost a decade in May, suggesting a sharp slowdown in economic growth was underway 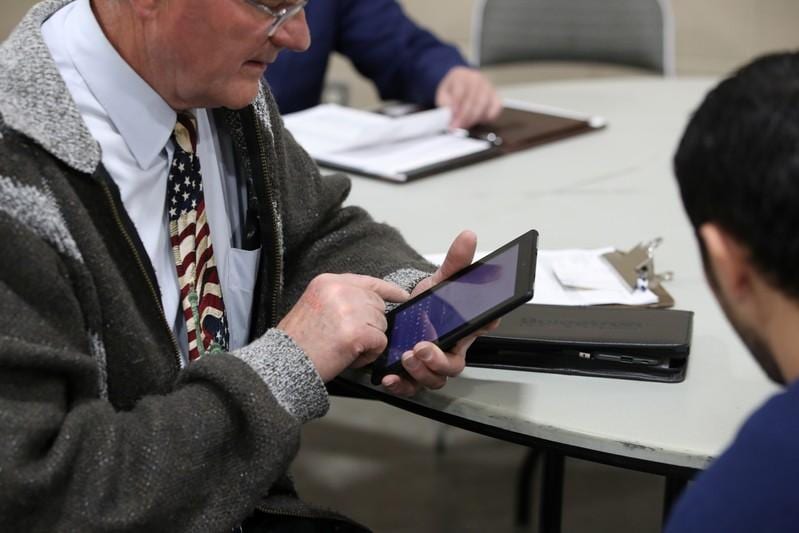 WASHINGTON (Reuters) - Sales of new U.S. single-family homes fell from near an 11-1/2-year high in April as prices rebounded and manufacturing activity hit its lowest level in almost a decade in May, suggesting a sharp slowdown in economic growth was underway.

But other data on Thursday showed the number of Americans filing claims for unemployment benefits unexpectedly fell last week. Labor market strength should support the economy, which is cooling as last year's massive stimulus from the Trump administration's tax cuts and spending increases fades.

Some of the loss of momentum is the result of the escalating U.S.-China trade war, which economists say is undermining business confidence, as well as sluggish growth overseas.

"With the downside risks to the economy rising again, particularly with the escalation of the trade war, the case for Fed rate cuts is building," said Michael Pearce, a senior economist at Capital Economics in New York.

Sales dropped in the South, the Midwest and West, but surged in the Northeast. Economists polled by Reuters had forecast new home sales, which account for about 11.5% of housing market sales, would decrease 2.8% to a pace of 675,000 units in April. Sales increased 7.0% from a year ago.

The median new house price increased 8.8% from a year ago to $342,200 in April, the highest level since December 2017. New house prices had mostly declined this year as builders put more affordable homes on the market. The drop in sales last month was concentrated in the market segment for homes below $300,000.

Lower prices earlier this year and declining mortgage rates have helped the new housing market, which has not been severely constrained by an inventory shortage.

Tight supply has crippled sales of previously owned homes. A report on Tuesday showed existing home sales fell for a second straight month in April, weighed down by a chronic shortage of more affordable houses.

The overall housing market hit a soft patch year and has contracted for five straight quarters. Another decline is likely in the second quarter as weak sales cut brokers' commissions.

U.S. Treasury prices were trading higher, while the dollar slipped against a basket of currencies. Major U.S. stock indexes were down more than 1.6%.

Separately on Thursday, data firm IHS Markit said its U.S. manufacturing PMI declined to a reading of 50.6 in early May, marking the lowest level since September 2009, from 52.6 in April. A reading above 50 indicates growth in the manufacturing sector, which accounts for about 12% of the U.S. economy.

The survey showed broad weakness, with a measure of new orders received by factories dropping for the first time since August 2009. Hiring at factories also slowed early this month. The weakness in manufacturing largely reflects an inventory overhang, which has resulted in businesses placing fewer orders.

The softness in manufacturing appears to be spilling over to the services sector. IHS Markit's services PMI dropped to a 39-month low of 50.9 in early May from a reading of 53.0 in April.

"The slowdown spreading to the service sector from the manufacturing sector represents a downside risk to overall U.S. economic growth outlook," said Scott Anderson, chief economist at Bank of the West in San Francisco.

The Atlanta Federal Reserve is forecasting gross domestic product rising at a 1.2 percent annualized rate in the second quarter. The economy grew at a 3.2 percent pace in the January-March quarter after a temporary boost from volatile exports and inventory accumulation.

But with the labor market showing resilience, a recession is unlikely. In a third report on Thursday, the Labor Department said initial claims for state unemployment benefits slipped 1,000 to a seasonally adjusted 211,000 for the week ended May 18. It was the third straight weekly drop in claims.

Economists had forecast claims would rise to 215,000 in the latest week. The four-week moving average of initial claims, considered a better measure of labor market trends as it irons out week-to-week volatility, dropped 4,750 to 220,250 last week.

The four-week average of claims increased 18,750 between the April and May survey periods, suggesting some moderation in employment gains after payrolls surged by 263,000 jobs last month. The unemployment rate is 3.6%, near a 50-year low.