U.S. farmers look past trade fears to cash in on China's hog crisis

By Tom Polansek and Nigel Hunt WALCOTT, Iowa/LONDON (Reuters) - It might seem an unlikely time for U.S. 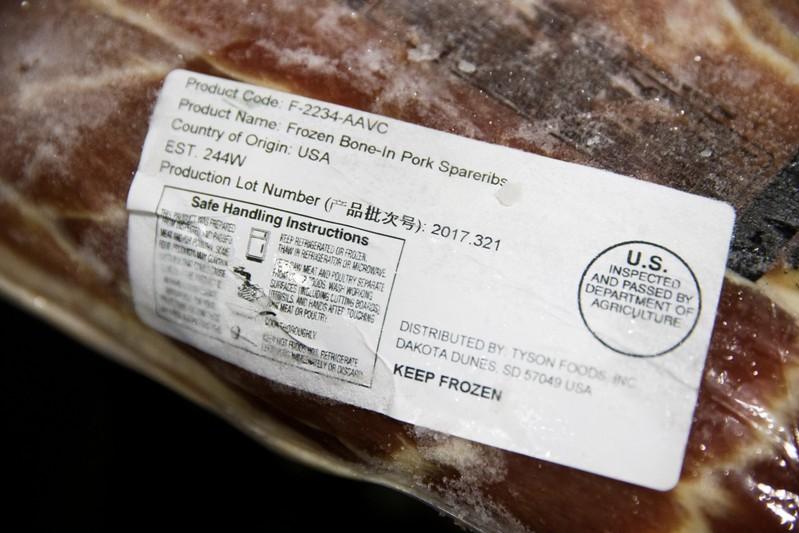 By Tom Polansek and Nigel Hunt

WALCOTT, Iowa/LONDON (Reuters) - It might seem an unlikely time for U.S. farmers to look to China for more business but the devastating impact of African swine fever on the Chinese pork industry is trumping concerns about trade wars and tariffs.

Experts estimate the disease will wipe out about a third of China's pork production this year, or 18 million tonnes. That's twice the amount of pork exported worldwide every year and enough to feed U.S. consumers for almost two years.

The U.S. trade war with China initially forced U.S. pork exporters to scour the world for new markets but as the swine fever crisis deepens they're gearing up for new opportunities to supply the Chinese market later this year and next.

The catch for U.S. hog farmers is that if they want to take advantage of the surge in Chinese pork demand, they can't feed their pigs with the growth drug ractopamine which is widely used in the United States but banned in China.

In recent years, the European Union has provided roughly two-thirds of China's pork imports, excluding offal, with Germany, Spain, the Netherlands and Denmark the main suppliers, according to Chinese customs data.

Potential demand is so huge, however, that the EU alone can't satisfy it. U.S. producers of ractopamine-free pigs could benefit, either by supplying China or making up shortfalls in other regions targeting the Chinese market.

Sixth-generation Iowa hog farmer Mike Paustian would certainly like to benefit from producing pigs without ractopamine, even though it helps pigs quickly build lean muscle instead of fat.

"That might be enough enticement," Paustian said at his farm in Walcott, Iowa, that sells about 28,000 pigs a year.

Citing competitive reasons, Tyson declined to comment on whether it pays farmers more for pigs raised without the feed additive or if it was offering premiums. The company told Reuters it was looking at diversifying its pork supply to include ractopamine-free hogs as demand expands.

Rival U.S. pork producer Smithfield Foods, which is owned by China's WH Group <0288.HK>, already raises all of the hogs on its company-owned and contract farms without the drug.

Traders and analysts said Smithfield was reconfiguring its U.S. processing operations to direct meat to China, which produced half the world's pork before swine fever decimated the industry.

Diana Souder, a Smithfield spokeswoman, declined to comment on the specific changes but said the company upgraded a plant in Smithfield, Virginia as "part of a broader initiative to better organise our production to meet demand".

"Not just Smithfield, but every U.S. pork processor will be shipping more product to China and the demand side is just expected to be strong, certainly into 2020," Smithfield CEO Ken Sullivan told analysts on a call.

The ongoing trade war between Beijing and Washington hit U.S. pork exports to China last year when its market share halved to 7% from 14% a year earlier, according to Chinese customs data.

But as African swine fever swept across China during the second half of 2018, expectations for demand started to pick up - even though duties on U.S. pork going to China were raised to 62% from 12% last year as part of tit-for-tat trade sanctions.

According to data from the U.S. Meat Export Federation, U.S. pork exports to China and Hong Kong rose 33% in May from a year earlier to 45,442 tonnes - though exports for the first five months of 2019 were still 7% lower than in 2018.

The price rises were sorely needed because many U.S. farmers had expanded output to supply a string of new U.S. processing plants, just as separate U.S. trade disputes with Mexico and China hit trade volumes.

"They got a lifeboat," said Williams, adding that increasing demand from China could be an added bonus.

"They're going to have to get this pork from somewhere," said Williams, who formerly led export sales and futures trading for Cargill's meat business unit. "The U.S. is going to benefit, so is Brazil and Europe."

He said monthly U.S. pork exports to China could treble by the end of 2019, assuming the two countries strike a trade deal.

Demand from China is expected to remain strong next year as a plunge in the number of breeding sows means it will take time to rebuild the country's pig stock. As many as half of China's sows may have died, according to industry estimates shared with Reuters.

Pork prices in China have already risen substantially since March and the agricultural ministry has said they could surge by 70 percent in the coming months as a result of the outbreak. Pork accounts for more than 60% of Chinese meat consumption.

"The rebuilding of China's sow herd could also take several years given the potential recontamination risk," ratings agency Fitch said in a July 9 report, which noted swine fever was having a positive impact on Smithfield's debt ratings.

China is not the only country hit. There have been outbreaks of swine fever in Vietnam, Cambodia, Mongolia, North Korea and Laos. It has also already spread across parts of central and eastern Europe and even been found in wild boars in Belgium.

EU export prospects would suffer a massive blow if the disease, which does not harm people, reached top European exporting nations such as Germany or Spain.

European industry sources said a surge in Chinese buying earlier this year had largely emptied warehouses and the flow of pork exports, while still steady, was not quite as strong now due to limited supplies.

Given the potential for a protracted trade war, U.S. farmers may still be wary of being overly dependent on Chinese trade. Canadian pork exporters initially benefited from the surge in demand by exporting more ractopamine-free pigs.

But Chinese officials found ractopamine in a Canadian pork shipment in June. Three Canadian exporters have now been banned from selling to China and Beijing has called for all Canadian meat imports to be suspended.

Relations between Canada and China have become strained since the chief financial officer of Huawei Technologies Co. was detained in Vancouver in December on a U.S. arrest warrant and charged with wire fraud to violate U.S. sanctions against Iran.

Another major pork exporter, Brazil, is expecting to increase shipments by more than 20% in 2019 to almost 800,000 tonnes thanks to Chinese demand, producer group ABPA has said.

Brazil allows the use of ractopamine but has been exporting pork free of the growth drug for about six years, Rui Vargas, a director at ABPA said. More companies are adopting ractopamine-free protocols to export pork, he said, declining to name any.

The magnitude of lost pork production in China, however, means some Chinese consumers may need to change their diets.

"Consumers will need to shift part of their pork consumption to other products. This should result in a higher demand for other proteins, particularly poultry meat," the European Commission said.