By Andrea Shalal FARNBOROUGH, England (Reuters) - Lockheed Martin's F-35 fighter jet is arriving in growing numbers in Europe, and is poised to play a much broader role in missile defence and other warfare plans than conventional fighters, according to U.S. and European officials. 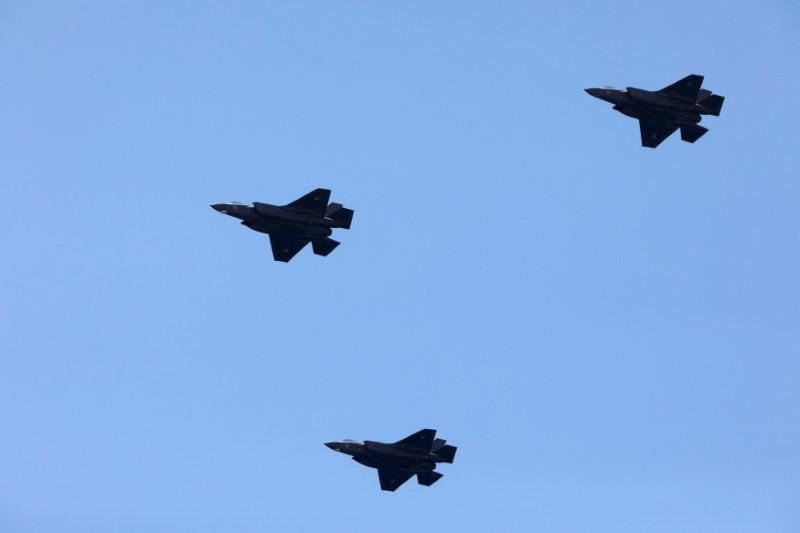 After years of technical challenges and programme delays, the F-35, the world's most expensive arms programme, is rapidly gaining a foothold in the United States and Europe.

The new warplane's high-end sensors will give it a bigger role across all domains of war than previous fighter planes, including in missile defence, said General Tod Wolters, the top commander of U.S. and NATO air forces in Europe.

Norway, Britain and Italy will have received 40 F-35s in Europe by the end of the year, with the first Dutch jets to arrive next year, and the first U.S. jets in fiscal year 2021.

Israel in May became the first country to use the stealth fighter in combat.

"It's a game-changing system," Wolters told Reuters in an interview before the Farnborough Airshow. "We're in the process of integrating the F-35 into the complete environment, not just the airspace."

He said buyer countries were working "feverishly" to ensure the jets could communicate with other aircraft and the military commands in charge of operations on land, at sea and in space, to take full advantage of its capabilities.

To aid that process, the U.S. Air Force has set up a new division at its European headquarters in Stuttgart, Germany, and senior officials from European user nations will also hold their annual meeting early September, U.S. Air Force officials said.

President Donald Trump and other U.S. officials have criticised the F-35 programme for delays and cost overruns, but the price per jet has steadily declined as production increased.

A preliminary new U.S. deal to buy 141 planes lowers the price of the F-35A, the most common version of the jet, to about $89 million, down around 6 percent from the last deal struck in February 2017, sources familiar with the talks said.

Last December, the British parliament’s Defence Committee raised questions about the procurement of the F-35 fighter jets that will eventually operate from two new aircraft carriers, criticising the Ministry of Defence for an “unacceptable lack of transparency” about the programme.

MORE THAN A FIGHTER

Wolters told an air power conference in London last week that one of the "bigger mistakes" had been to label the jet with an "F" for fighter since it offered far broader capabilities.

The jet, whose development was funded in part by Britain, will improve warnings of enemy actions and command and control functions, while beefing up air and missile defences, UK officials said at a high-level conference in London last week.

Land-based tests in 2016 showed the Aegis Combat System could kill a target using a Standard-Missile 6 with data provided solely by an F-35, with at-sea tests to follow.

Major General Tonje Skinnarland, chief of staff of the Norwegian Air Force, said she was pleased with the performance of the six F-35s received in Europe thus far, and the seven jets Norway operates for training in the United States.

She said the jets' combination of stealth, sensors and weapons would give Norway the ability to strike from a distance, if needed, existing Russian air defence capabilities that could limit Norway's ability to manoeuvre in its own airspace.

"Our potential adversaries have the potential to deny our operations, but the F-35 changes the game because it is able to operate in a contested environment," she said. "It can find out what's happening and do something about it, if necessary."

Norway is on track to declare an initial squadron of 15 F-35s operational by October 2019, Skinnarland said, adding that integration training with the other services was well underway.

"All the European operators of the F-35 are committed to learn from each other and to move as fast as we can," she said.