By Lucia Mutikani WASHINGTON (Reuters) - The U.S. economy slowed more than initially thought in the fourth quarter, keeping growth in 2018 below the Trump administration's 3 percent target, and corporate profits fell by the most in a year after a one-off boost from lower taxes. 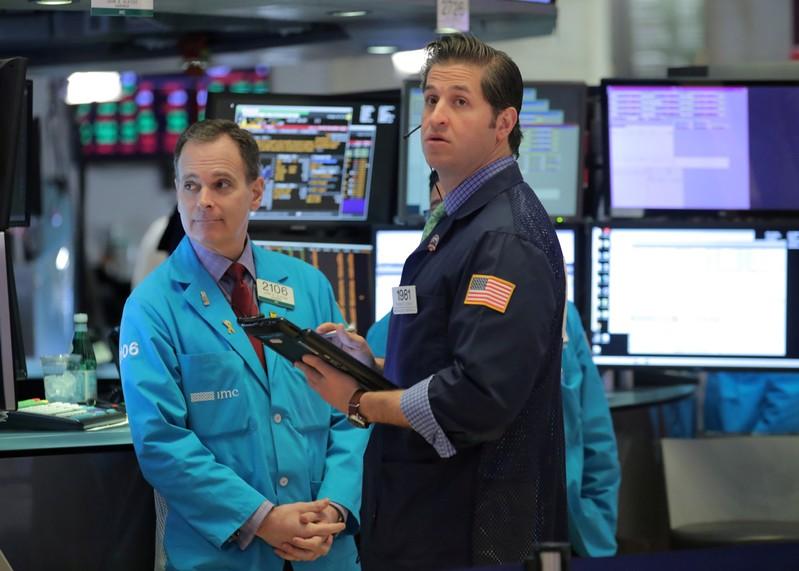 WASHINGTON (Reuters) - The U.S. economy slowed more than initially thought in the fourth quarter, keeping growth in 2018 below the Trump administration's 3 percent target, and corporate profits fell by the most in a year after a one-off boost from lower taxes.

The economy is losing momentum as stimulus from the White House's $1.5 trillion in tax cuts and a government spending blitz diminishes. It is also facing headwinds from slowing global growth, Washington's trade war with China and uncertainty over Britain's departure from the European Union.

The darkening clouds over the economy contributed to the Federal Reserve's decision last week to bring its three-year campaign to tighten monetary policy to an abrupt end. The U.S. central bank abandoned projections for any interest rate hikes this year after increasing borrowing costs four times in 2018.

"The trend in quarterly growth is clearly on the wane," said Curt Long, chief economist at the National Association of Federally-Insured Credit Unions. "The strength of the labor market should be enough to postpone a recession for at least this year, but the margins are getting smaller, and it would not take much to tilt growth into negative territory."

Gross domestic product increased at a 2.2 percent annualized rate, the Commerce Department said in its third reading of fourth-quarter GDP growth on Thursday. That was down from the 2.6 percent pace estimated in February.

The economy expanded at a 3.4 percent pace in the third quarter. For all of 2018, the economy grew 2.9 percent as previously reported. Annual growth still missed the White House's 3 percent target despite the massive fiscal stimulus.

Growth last year was, however, the strongest since 2015 and was an acceleration from the 2.2 percent logged in 2017.

Compared to the fourth quarter of 2017, GDP rose 3.0 percent, revised down from the 3.1 percent reported last month. President Donald Trump has pointed to the year-on-year growth figure as proof that the tax cuts, which have contributed to a swelling of the federal government deficit, has put the economy on a sustainable path of strong growth.

The Commerce Department's GDP release, however, highlighted the 2.9 percent as the annual growth for 2018. Trump likes to showcase the economy as one of the biggest achievements of his term, declaring last July that his administration had "accomplished an economic turnaround of historic proportions."

On the campaign trail, Trump boasted he could boost annual GDP growth to 4 percent, a goal analysts said was always unrealistic given low productivity, among other factors.

"Three percent growth is not that much different than 2.7 percent in President (Barack) Obama's term so you can't brag too much," said Chris Rupkey, chief economist at MUFG in New York.

Economists polled by Reuters had forecast GDP in the fourth quarter being revised down to a 2.4 percent pace. The revisions to the fourth-quarter reading reflected markdowns to consumer and business spending, as well as government outlays and investment in homebuilding. Exports were, however, revised up.

Growth appears to have slowed even further early in the first quarter, with retail sales rising modestly, manufacturing production falling and homebuilding tepid. The softening economic outlook is seen helping to undercut profit growth, which weakened in late 2018.

After tax profits without inventory valuation and capital consumption adjustment, which correspond to S&P 500 profits, fell at a 1.7 percent rate or $34.2 billion in the fourth quarter. That was the weakest pace since the fourth quarter of 2017 and followed a 0.9 percent rise in the third quarter.

When measured from the income side, the economy grew at a 1.7 percent rate in the fourth quarter and 2.4 percent in 2018.

Growth forecasts for the first quarter are as low as a 0.9 percent rate. U.S. financial markets were little moved by the GDP report.

Growth in consumer spending, which accounts for more than two-thirds of U.S. economic activity, increased at a 2.5 percent rate in the fourth quarter instead of the previously reported 2.8 percent pace.

Consumer spending remains underpinned by a strong labor market, with a report from the Labor Department showing the number of Americans filing for unemployment benefits fell to a more than one-month low last week.

Growth in business spending on equipment and intellectual products was lowered. The drop in residential construction outlays was deeper than previously reported and government spending actually contracted instead of expanding.