By David Brunnstrom WASHINGTON (Reuters) - The U.S. State Department and Congress took aim at China on Wednesday, even as President Donald Trump hailed 'goodwill' between Washington and Beijing and said he expected to sign the first phase of a trade deal with President Xi Jinping next month. While Trump touted progress in his damaging trade war with Beijing, State Department officials said Chinese diplomats and officials in the United States would be required to give advance notice of meetings with state, local and municipal officials, as well as at educational and research institutions, calling it a response to how U.S. 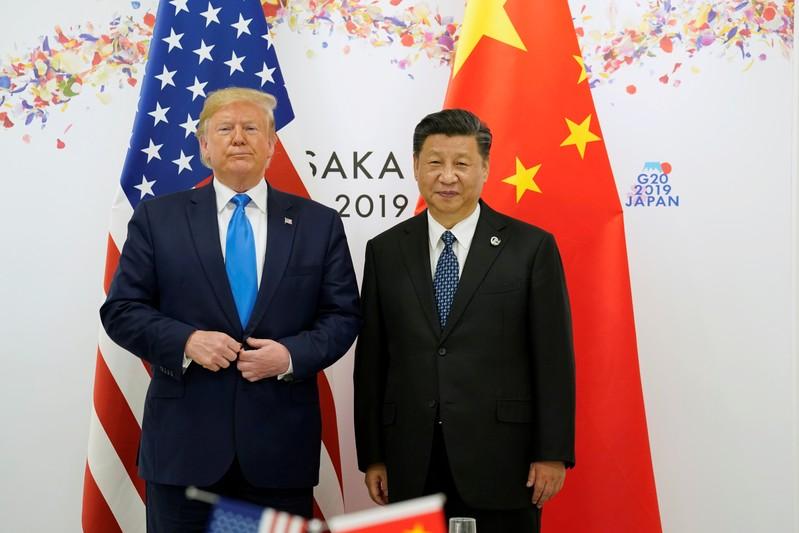 WASHINGTON (Reuters) - The U.S. State Department and Congress took aim at China on Wednesday, even as President Donald Trump hailed "goodwill" between Washington and Beijing and said he expected to sign the first phase of a trade deal with President Xi Jinping next month.

While Trump touted progress in his damaging trade war with Beijing, State Department officials said Chinese diplomats and officials in the United States would be required to give advance notice of meetings with state, local and municipal officials, as well as at educational and research institutions, calling it a response to how U.S. diplomats are treated in China.

In the Senate, the Republican chair of the Foreign Relations Committee said he hoped the full Senate would vote soon on legislation that would toughen scrutiny of China's rule in Hong Kong and require the State Department to evaluate, at least once a year, whether the territory retains sufficient autonomy to justify the special treatment it enjoys under U.S. law.

The House passed similar legislation on Tuesday, drawing an angry response from China, which accused U.S. lawmakers of "sinister intentions" to undermine Hong Kong's stability and warned that bilateral relations would be damaged should the measures - which Trump must ultimately approve - become law.

The bills have garnered strong backing in Congress, from Democrats as well as Trump's fellow Republicans, despite delicate U.S.-China trade talks.

"(F)reedoms of expression and peaceful assembly - core values that we share with the people of Hong Kong - must be vigorously protected. We continue to urge Beijing to uphold its commitments," said David Stilwell, assistant secretary of state for East Asian and Pacific Affairs.

Trump raised questions about his commitment to protecting freedoms in Hong Kong when he referred in August to its mass street protests as "riots" that were a matter for China to deal with.

He has since called on China to handle the issue humanely and warned that if anything bad happened in Hong Kong it could be bad for trade talks.

Trump said on Friday China and the United States had reached the first phase of a trade deal that covered agriculture, currency and some aspects of intellectual property protections, and would ease reciprocal trade restrictions that the world's two largest economies have been imposing for 15 months.

Officials on both sides said last week much more work needed to be done before an accord could be agreed. But Trump said on Wednesday he would "probably" sign it with Xi at the Asia-Pacific Economic Cooperation (APEC) Forum in Santiago from Nov. 11 to 17.

"There's been a lot of goodwill between the United States and China over the last period of time," Trump said. "We'll probably do a signing over there of phase one, assuming it all gets finished up, which we think it will."

Trump has made China a principal target for criticism throughout his presidency. He has also stressed his personal relationship with Xi, and his focus on securing a trade deal with Beijing has stoked worries that he might subordinate human rights issues, including the welfare of Hong Kong, to that aim.

He said Xi had made some "troubling choices" - including by naming himself president without term - "that deviated from a system that was becoming more regularized."

"In some ways that predictability brought stability. It’s becoming less predictable,” he said.

Last year, Trump hailed Xi as "president for life" after China's ruling Communist Party said it was eliminating a two-term limit for the presidency.