By Lucia Mutikani WASHINGTON (Reuters) - U.S. consumer sentiment fell unexpectedly in early November as households worried about their finances, the resurgent COVID-19 pandemic and the depleted fiscal stimulus, dimming the economy's outlook as the curtain started to close on a challenging year. The survey from the University of Michigan on Friday also showed Democrat Joe Biden's victory in the Nov 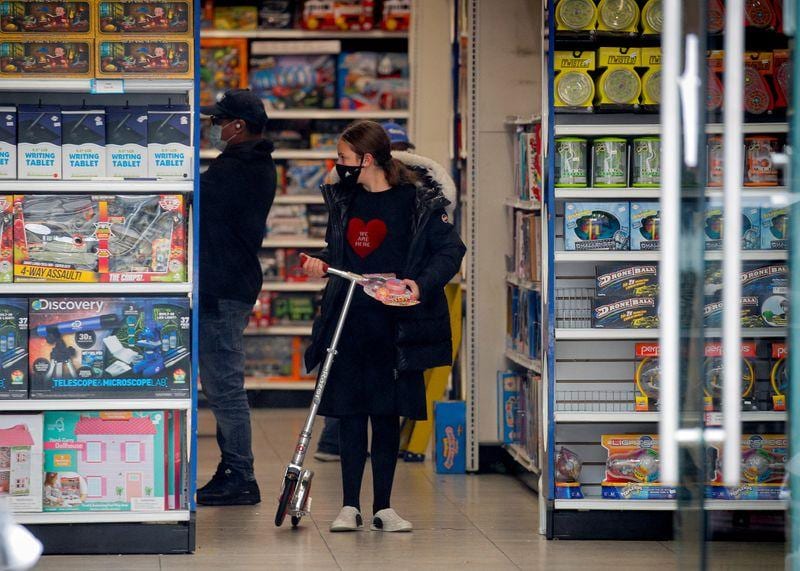 WASHINGTON (Reuters) - U.S. consumer sentiment fell unexpectedly in early November as households worried about their finances, the resurgent COVID-19 pandemic and the depleted fiscal stimulus, dimming the economy's outlook as the curtain started to close on a challenging year.

The survey from the University of Michigan on Friday also showed Democrat Joe Biden's victory in the Nov. 3 presidential election was weighing on expectations among Republicans, with a slight gain among Democrats.

Daily new coronavirus cases have been exceeding 100,000, with hospitalizations and deaths surging, prompting some state and local governments to impose new restrictions on businesses. Restrictions and consumer avoidance of crowded places could trigger another wave of layoffs and further squeeze incomes following the loss of a government weekly unemployment subsidy.

"The drawdown in sentiment seems to reflect decreased

perceptions of household finances, which may be a lagged effect

The University of Michigan's consumer sentiment index dropped to 77 early this month from a final reading of 81.8 in October. Economists polled by Reuters had forecast the index little changed at 82. The survey's measure of current conditions was steady. Its gauge of expectations fell to 71.3 from 79.2.

A weekly unemployment supplement, which was part of more than $3 trillion in government coronavirus relief, has lapsed for millions of unemployed and underemployed workers. A second rescue package is unlikely before President-elect Biden takes office in January.

"With more and more states starting to impose new restrictions on activity, this highlights the growing downside risks posed by the pandemic for the next few months," said Andrew Hunter, a senior economist at Capital Economics.

Exploding COVID-19 infections and labor market slack are seen keeping a lid on inflation, even as producer prices maintain their steady rise. In a separate report, the Labor Department said its producer price index for final demand climbed 0.3% in October, driven by more expensive food and gasoline, after rising 0.4% in September.

In the 12 months through October, the PPI advanced 0.5% after rebounding 0.4% in September.

Economists had forecast the PPI would rise 0.2% in October and increase 0.4% on a year-on-year basis.

Excluding the volatile food, energy and trade services components, producer prices gained 0.2% in October. The so-called core PPI advanced 0.4% in September. In the 12 months through October, the core PPI increased 0.8% after rising 0.7% in September.

Coming in the wake of data on Thursday showing consumer prices unchanged in October, the PPI report further allayed fears of deflation, a decline in the general price level that is harmful during a recession as consumers and businesses may delay purchases in anticipation of lower prices.

Economists expect the Federal Reserve will keep interest rates near zero at least through 2021. The U.S. central Bank has a 2% target, a flexible average. Its preferred inflation measure, the core PCE price index rose 1.5% in September

The cost of services rose 0.2% after advancing 0.4% in September. Nearly 40% of the broad-based gain was due to a 1.1% increase in transportation and warehousing services. Margins for final demand trade services, which measure changes in margins received by wholesalers and retailers, climbed 0.2%.

"Inflation is hard to find at the producer level at the moment and with the second wave of coronavirus cases hitting new records nearly every day, producer goods inflation is unlikely to emerge in coming months," said Chris Rupkey, chief economist at MUFG in New York.