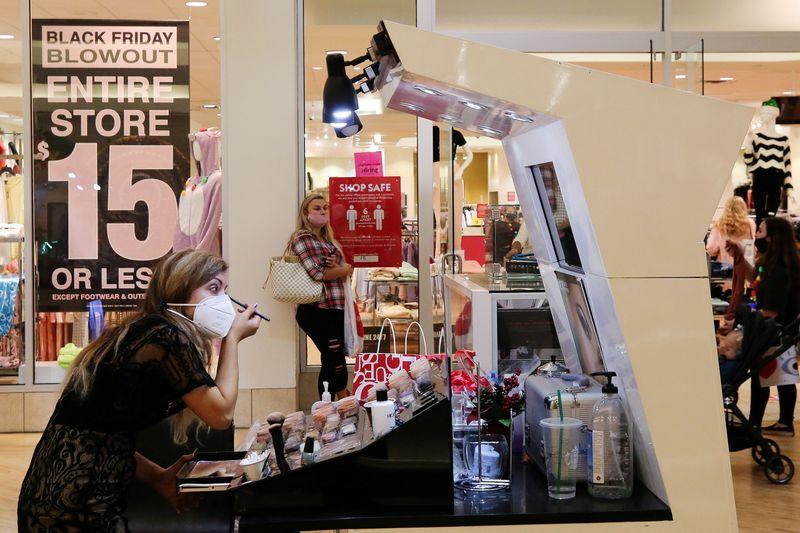 WASHINGTON (Reuters) -U.S. consumer confidence dropped for a second straight month in December as a deterioration in the labor market amid renewed business restrictions to slow the raging pandemic offset the rolling out of a vaccine for COVID-19.

The decline in confidence to a four-month low reported by the Conference Board on Tuesday was the latest indication that the economic recovery from the pandemic was losing steam, also because of delays by Congress to approve another rescue package.

The government confirmed on Tuesday that the economy grew at a historic pace in the third quarter, juiced up by more than $3 trillion in pandemic relief. Congress on Monday approved additional fiscal stimulus worth almost $900 billion, but economists said this was insufficient and too late to counter a bleak winter of rising coronavirus infections and layoffs.

"The storm clouds are growing darker and the worst may be yet to come," said Chris Rupkey, chief economist at MUFG in New York. "The new coronavirus outbreak means the economy will be flirting with disaster in the first quarter of 2021 where a downturn is possible despite Congress throwing more money our way."

The Conference Board's consumer confidence index dropped to a reading of 88.6 this month, the lowest since August, from 92.9 in November. Economists polled by Reuters had forecast the index ticking up to 97.0 in December. The index was at 132.6 in February. The cut-off date for the survey was Dec. 14.

Two vaccines have since been approved for use to combat the respiratory illness, which economists believe will limit further downside in consumer confidence.

The United States is struggling with a resurgence in new coronavirus cases, with more than 17.78 million people infected and over 317,800 dead, according to a Reuters tally of official data. State and local governments have re-imposed restrictions on businesses, undercutting consumer spending and unleashing a fresh wave of layoffs.

The decline in consumer confidence followed data this month showing the economy in November added the fewest jobs since the jobs recovery started in May. Retail sales decreased in November for a second straight month and the number of people filing new claims for unemployment benefits is at three-month high.

The worsening employment outlook was underscored by the Conference Board survey, which showed its so-called labor market differential, derived from data on respondents' views on whether jobs are plentiful or hard to get, tumbled to a reading of -0.2 this month from 6.9 in November. That measure closely correlates to the unemployment rate in the Labor Department's employment report. It was as high as 38.3 in August last year.

December's contraction strengthens economists' expectations for a decline in nonfarm payrolls this month. The government will publish December's employment report in January.

Stocks on Wall Street were lower. The dollar rose against a basket of currencies. U.S. Treasury prices were higher.

The share of consumers expecting an increase in income rose to 16.8% from 16.0% in November. The proportion anticipating a drop slipped to 14.3% from 14.5% last month.

Fewer consumers expected to purchase homes and motor vehicles over the next six months, relative to November's survey. But more consumers planned purchases of appliances like refrigerators and television sets.

That suggests some cooling ahead for housing, the star of the recovery. A separate report from the National Association of Realtors on Tuesday show existing home sales fell 2.5% to a seasonally adjusted annual rate of 6.69 million units in November. That followed five straight monthly increases.

The housing market is being driven by record low interest rates, but surging home prices amid a dearth of properties is sidelining many first-time buyers.

Robust housing and consumer spending helped to power the economy last quarter. Gross domestic product rebounded at a 33.4% annualized rate in the July-Sept quarter, the Commerce Department said in its third estimate of GDP on Tuesday. That was revised up from the 33.1% pace reported last month and recouped two thirds of output lost during the pandemic.

The economy plunged into recession in February and output remains 3.4% below its level at the end of 2019. The economy contracted at a 31.4% rate in the April-June quarter, the deepest since the government started keeping records in 1947.

Twenty-one industries led by the automobile sector contributed to GDP growth last quarter. Mining was the only drag as cheaper oil weighed on businesses' spending on residential structures like gas and oil well drilling.

Corporate profits also rebounded strongly last quarter. But performance has been overtaken by the relentless pandemic, leaving GDP growth estimates for the fourth quarter around a 5% rate. Most economists expect modest growth or even a contraction in the first three months of 2021.