By Lucia Mutikani WASHINGTON (Reuters) - U.S. consumer confidence tumbled to a 21-month low in June as households grew a bit more pessimistic about business and labor market conditions amid concerns about a recent escalation in trade tensions between the United States and China. The economy's prospects were further dimmed by other data on Tuesday showing sales of new single-family homes unexpectedly fell for a second straight month in May. 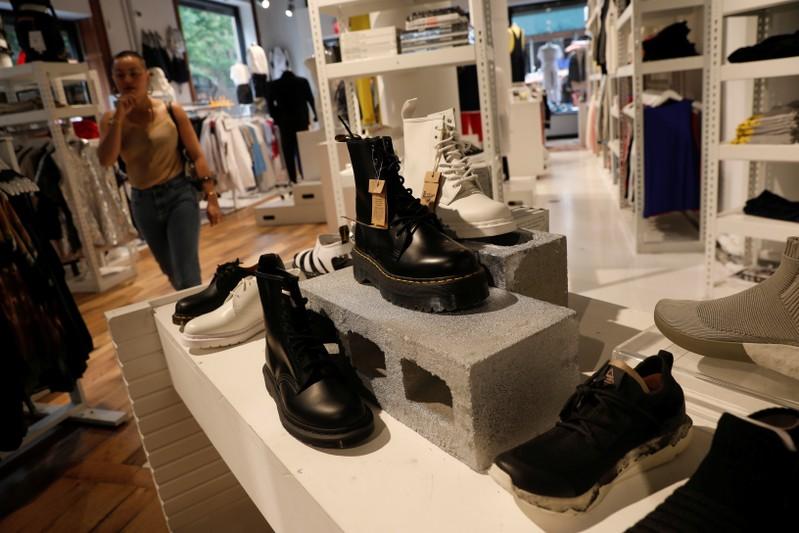 WASHINGTON (Reuters) - U.S. consumer confidence tumbled to a 21-month low in June as households grew a bit more pessimistic about business and labor market conditions amid concerns about a recent escalation in trade tensions between the United States and China.

The economy's prospects were further dimmed by other data on Tuesday showing sales of new single-family homes unexpectedly fell for a second straight month in May. Growing risks to the economy, especially related to the trade war between Washington and Beijing, and low inflation prompted the Federal Reserve last week to signal interest rate cuts beginning as early as July.

"The headwinds from the ongoing trade war the economy faces are definitely growing stronger, and it will be a miracle if Fed officials can pull a rabbit out of their hats and keep the economy moving forward," said Chris Rupkey, chief economist at MUFG in New York.

The Conference Board said its consumer confidence index dropped 9.8 points to a reading of 121.5 this month, the lowest since September 2017, from a downwardly revised 131.3 in May.

This month's drop in the index was the largest since July 2015. The index, which was previously reported at 134.1 in May, still remains at lofty levels, suggesting consumer spending remains supported.

The Conference Board blamed the decline on the trade tensions and cautioned that continued uncertainty "at some point, could even begin to diminish consumers' confidence in the expansion." The economy will mark 10 years of growth next month, the longest expansion on record.

President Donald Trump last month imposed additional tariffs of up to 25% on $200 billion of Chinese goods, prompting retaliation by Beijing. Trump has threatened more duties on Chinese imports if no deal is reached at a Group of 20 nations summit this week in Japan.

Economists polled by Reuters had forecast the consumer confidence index at 131.1 in June.

The Conference Board survey showed a decrease in the share of consumers with a favorable assessment of business conditions this month. The survey's so-called labor market differential, derived from data about respondents who think jobs are hard to get and those who think jobs are plentiful, fell to a one-year low of 27.6% in June from 33.5% in May.

That measure closely correlates to the unemployment rate in the Labor Department's employment report.

"The rolling-over that we are seeing here in jobs plentiful is worryingly reminiscent of what we have seen late in prior cycles," said Tim Quinlan, a senior economist at Wells Fargo Securities in Charlotte, North Carolina. "If past patterns hold, without a turnaround in this series, job growth could slow in coming months."

The economy created 75,000 jobs in May, a sharp step-down from 224,00 in April. Last month's tepid job gains were largely viewed as an anomaly, given that a key labor market indicator, weekly claims for unemployment benefits, remains low.

The dollar was trading higher against a basket of currencies, while U.S. Treasury prices were mixed. Stocks on Wall Street were trading lower.

Gross domestic product growth estimates for the second quarter are ranging from a 1.5% to 2.4% annualized rate. The economy grew at a 3.1% rate in the first quarter.

Slowing growth was underscored by a separate report from the Commerce Department on Tuesday showing new home sales dropped 7.8% to a seasonally adjusted annual rate of 626,000 units in May, the lowest in five months. April's sales pace was revised up to 679,000 units from the previously reported 673,000 units.

Economists had forecast new home sales, which account for about 10.5% of housing market sales, rising 1.9% to a pace of 680,000 units in May. New home sales are drawn from permits and tend to be volatile on a month-to-month basis. Sales fell 3.7% from a year ago.

The housing market has remained sluggish even as mortgage rates have dropped, with builders continuing to complain about land and labor shortages. Tariffs on Chinese imports are also worrying homebuilders.

Lennar Corp, the No.2 U.S. homebuilder, said on Tuesday the impact of tariffs on Chinese goods resulted in a headwind of about $500 per home on average during its second quarter, which ended on May 31.

A third report on Tuesday showed the S&P CoreLogic Case-Shiller composite index of home prices in 20 metropolitan areas rose 2.5% in April on a year-over-year basis after increasing 2.6% in March. House price inflation has been slowing after last year's surge in mortgage rates dampened demand for housing.

"A slowing economy will constrain housing demand, and that implies house price growth will continue to ease to around 2% year-on-year by the end of this year," said Matthew Pointon, property economist at Capital Economics in New York.

"We doubt lower interest rates means housing demand will continue to climb. After all, home-buying sentiment is subdued and banks are no longer loosening lending standards."