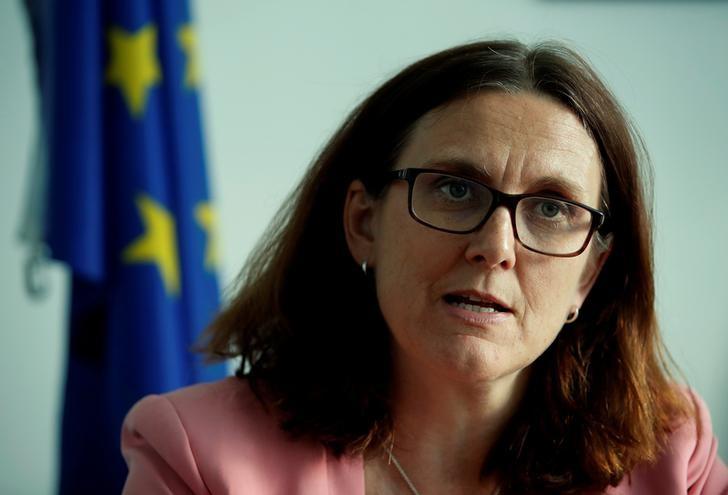 By David Shepardson and Johan Ahlander

Trade experts expressed hope that the meeting between Trump and European Commission President Jean-Claude Juncker could start a process for exploring how the United States, the European Union and other allies begin to reduce automotive tariffs -- and deter Trump from imposing a 25 percent tariff on imported cars and auto parts.

The European Commission's trade commissioner, Cecilia Malmstrom, said she was drawing up a $20 billion list of U.S. goods to hit with retaliatory duties should Washington impose tariffs on imported cares.

"We hope that it doesn't come to that and that we can find a solution. If not, the EU Commission is preparing a rather long list of many American goods," Malmstrom told Swedish newspaper Dagens Nyheter on Wednesday.

"I think President Juncker believes he is here to try to calm the situation and get into a negotiating process to stave off potential U.S. tariffs on autos. I suspect they would have no idea how this meeting will go or not go," said Heather Conley, senior vice president of European affairs at the Center for Strategic and International Studies (CSIS), a Washington foreign policy think tank.

The meeting has the potential for tension. Juncker has called Trump's trade ideas "stupid," while Trump has declared on Twitter that "tariffs are the greatest" because they have pushed trading partners to negotiate with the United States.

"Expectations are so low that I believe it is possible ... that people may be very surprised on the upside," Kudlow said. "Where there is a political willingness, there's a political way."

Automakers and White House officials privately believe Trump is intent on imposing tariffs of up to 25 percent on imported cars and parts despite the almost unanimous opposition of the auto industry and deep concern among members of Congress.

The Trump administration in May launched an investigation into whether imported vehicles and parts pose a national security threat. Trump has said he would quickly impose tariffs of 20 or 25 percent.

Several auto industry officials have said they believe this national security probe into automotive imports is designed to persuade Mexico, Canada, Japan, the EU and others to make concessions on trade.

The Commerce Department could recommend new tariffs as early as September, administration officials have said.

Major U.S. and global automakers told the Commerce Department last week that imposing tariffs of 25 percent on imported cars and parts would raise the price of U.S. vehicles by $83 billion annually and cost hundreds of thousands of jobs.

The Commerce Department said on Wednesday it had made no decisions and aims to complete the investigation "within a couple months."

In response to the U.S. metals tariffs, the EU has already imposed its own import duties on 2.8 billion euros ($3.3 billion) worth of U.S. goods, including products like bourbon and motorcycles that are made in some of the electoral districts that supported Trump in the 2016 U.S. election.

The Commission briefed EU countries last week on the bloc's possible response to car tariffs, saying in theory it could hit 9 billion euros of U.S. goods, according to EU sources.

However, some EU diplomats said the commission was also looking at going for double that amount - to the level Malmstrom is suggesting - at half the duty rate.

The European Commission, which handles trade policy on behalf of the EU's 28 member countries, has insisted that Juncker is seeking to open a dialogue with Trump, rather than to negotiate. EU officials have also downplayed the idea that Juncker is arriving with a novel trade offer.

He told broadcaster Deutschlandfunk that the two could try to forge a lighter version of the planned U.S.-European trade deal known as the Transatlantic Trade and Investment Partnership (TTIP). TTIP negotiations were stalled after Trump's 2016 election victory..

Trump on Tuesday tweeted that the EU was coming to negotiate a trade deal.

"I have an idea for them. Both the U.S. and the E.U. drop all Tariffs, Barriers and Subsidies! That would finally be called Free Market and Fair Trade! Hope they do it, we are ready - but they won't!" Trump wrote.

(Reporting by David Shepardson and Johan Ahlander; Writing by David Lawder in WASHINGTON and Philip Blenkinsop in BRUSSELS; Editing by Larry King and Will Dunham)