U.S. and China clash at WTO over ideology, state's role

By Tom Miles GENEVA (Reuters) - Chinese and U.S. envoys presented radically differing visions of Beijing's economic model at the World Trade Organization on Thursday, a choice between 'the world's most protectionist economy' and a growth story that has benefited all countries. 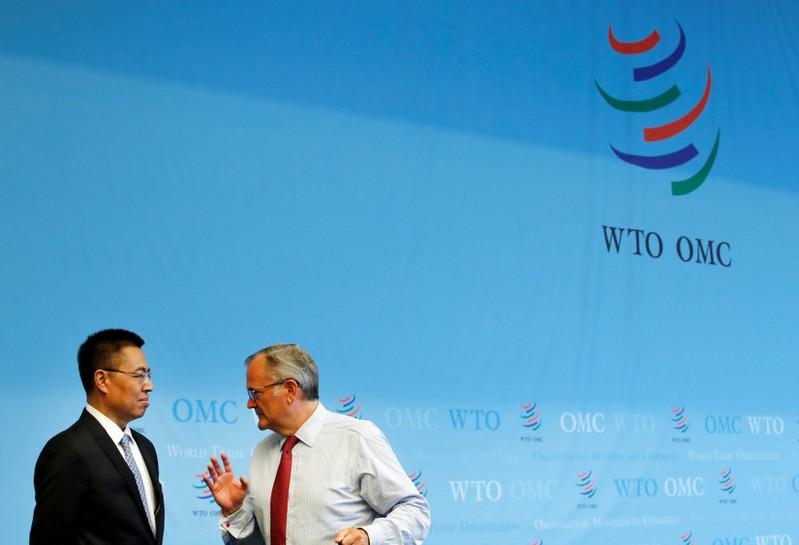 GENEVA (Reuters) - Chinese and U.S. envoys presented radically differing visions of Beijing's economic model at the World Trade Organization on Thursday, a choice between "the world's most protectionist economy" and a growth story that has benefited all countries.

The clash came as the two face off in a multi-billion dollar trade war - U.S. President Donald Trump has launched a barrage of tariffs, accusing China of unfair practices and stealing innovation. China has targeted U.S. farm produce.

"Despite China’s repeated portrayal of itself as a staunch defender of free trade and the global trading system, China is in fact the most protectionist, mercantilist economy in the world," Shea said.

Aside from the tariffs, the two sides are wrestling to get the WTO to see things their way: Washington says China cheats by having an economy run by the state, Beijing says it plays by the rules agreed when it joined the WTO in 2001.

Shea said the harm done by China's state-led approach to trade and investment "can no longer be tolerated", and it was not enough to assert that it was following WTO rules.

State-owned enterprises play an outsized role in China, with control exercised by the government and Communist Party, which appoint top executives and hold the keys to crucial inputs such as land and capital, Shea said.

He said the law was an instrument of the state, and courts were structured to respond to the Communist Party's direction.

"For China, economic reform means perfecting the government’s and the Communist Party’s management of the economy and strengthening the state sector, particularly state-owned enterprises."

China's Ambassador Zhang Xiangchen said Shea's remarks had a whiff of gunpowder about them and his report was "half-cooked", with no evidence to support its assertion that the Chinese state "controls" enterprises.

In a statement to Reuters, Zhang said the United States was trying to demonise China to take the heat off itself, but it was an illusion to think China would bow down and accept a tailor-made set of rules that sought to tie its hands.

Zhang told the WTO meeting that Shea wanted WTO members to believe that enterprises controlled by the government were "public bodies" subject to WTO subsidy rules. But WTO judges had definitively thrown out that argument, he added.

Beijing's industrial policies were "guidance" and state-owned enterprises were autonomous market entities responsible for their own profits or losses, he said. Overcapacity in some industries was due not to the state but to contraction of global demand following the financial crisis, he added.

The U.S. paper had misleadingly edited China's official policy, cutting out references to the "decisive role" of the market in allocating resources, he said.

"A fiction repeated enough times may become a belief," he said, adding that he had read Shea's paper very carefully, including its 88 footnotes.

"For some footnotes, I could not find the sources as referred," he said. "But as we all know, the devil is in the details. If a paper has flaws in its footnote, then its evidence may be called into question and its arguments will be put into doubt."