By David Shepardson and Steve Holland WASHINGTON (Reuters) - Major U.S. airlines sought a government bailout of more than $50 billion (41 billion pounds) as the White House is urgently drafting a financial assistance package in the wake of the steep falloff in U.S. 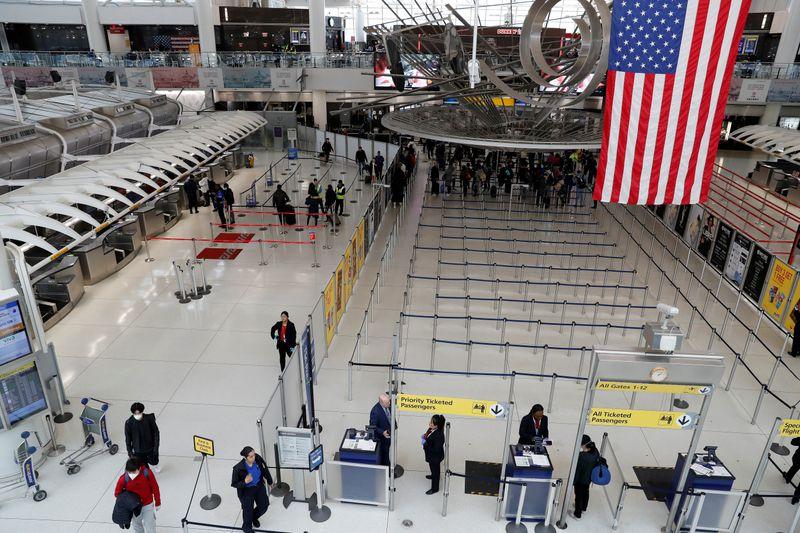 WASHINGTON (Reuters) - Major U.S. airlines sought a government bailout of more than $50 billion (41 billion pounds) as the White House is urgently drafting a financial assistance package in the wake of the steep falloff in U.S. travel demand sparked by the coronavirus pandemic.

The pain was felt around the globe, with European carriers making unprecedented cuts to flights, costs and staffing while stepping up calls for emergency aid. South America's largest carrier, LATAM Airlines Group, cancelled 90% of its international flights as demand collapsed.

The U.S. airlines warned that without action all of their members could run out of money by year-end - and even sooner if credit card companies stared withholding payments. Without action soon, airlines could take further urgent actions to furlough thousands of workers.

"This is a today problem, not a tomorrow problem. It requires urgent action," said Nicholas Calio, president of the airline group. The airlines' proposal would see them get funds within 15 days of approval.

U.S. carriers have slashed flights and last week met with the White House to sound the alarm for urgent action. The National Economic Council and U.S. Treasury are drafting a proposed assistance package and officials have been in early talks with lawmakers, officials told Reuters.

Separately, Amtrak and U.S. airports are also in talks about receiving urgent government assistance. Amtrak is slashing trains and warned it could see losses of at least hundreds of millions of dollars this year.

Two people briefed on the matter said the chief executives of all of Airlines for Americas' members signed off on the request, including United, Atlas Air

The airlines warned about the impact of a 30-day domestic ban because that would require them to repay consumers for all tickets purchased within seven days if the service cannot be provided even for non-refundable tickets. That could boost liquidity losses by $7 billion to $10 billion make it harder to obtain credit.

Kudlow added that White House officials will visit the Senate to discuss options on Monday.

"It's not so much a bailout" for airlines, Kudlow told Fox Business Network, calling it liquidity and cash flow help.

"We don't see any of the airlines failing. But if they get into a cash crunch, we're going to try to help them. We're consulting with the House and Senate to see what works. And of course the Treasury Department and the FED have enormous powers on this," Kudlow said.