By Nadine Awadalla and Tom Perry BEIRUT (Reuters) - The United Nations urged Lebanon on Tuesday to form a competent new government better able to seek international aid after weeks of protests against the ruling elite, warning the country was in a critical financial and economic situation. Lebanon's banks and schools were shut in a new wave of disruption as politicians struggled to agree on a new government to steer the country out of its worst economic crisis since the 1975-90 civil war. 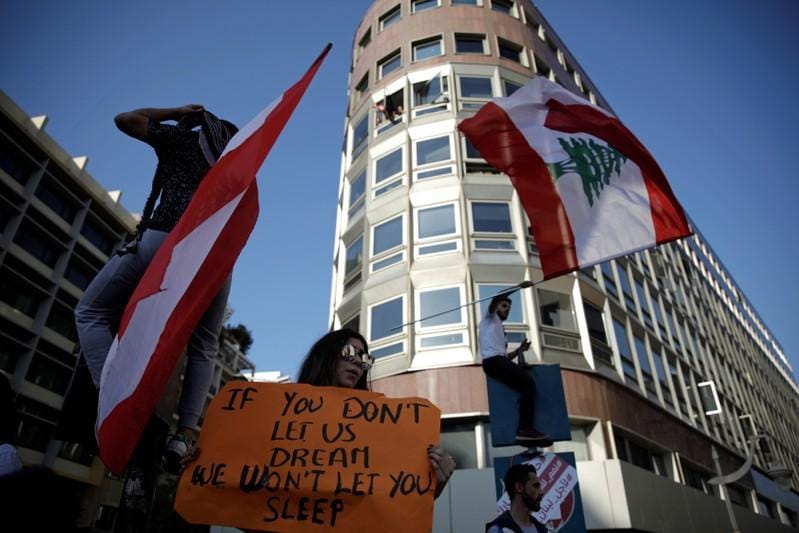 By Nadine Awadalla and Tom Perry

BEIRUT (Reuters) - The United Nations urged Lebanon on Tuesday to form a competent new government better able to seek international aid after weeks of protests against the ruling elite, warning the country was in a critical financial and economic situation.

Lebanon's banks and schools were shut in a new wave of disruption as politicians struggled to agree on a new government to steer the country out of its worst economic crisis since the 1975-90 civil war.

Lebanon has been swept by weeks of demonstrations fuelled by anger at the establishment, including several former civil war militia leaders, widely perceived to have overseen rampant state corruption for decades.

The top U.N. official in Lebanon called for the urgent formation of a cabinet made up of people known "for their competence and integrity" that would be "trusted by the people". Such a government would be in "a better position to appeal for support from Lebanon’s international partners".

"The financial and economic situation is critical, and the government and other authorities cannot wait any longer to start addressing it," the U.N. Special Coordinator for Lebanon, Jan Kubis, said after meeting President Michel Aoun along with a group of foreign ambassadors.

The head of an importers' syndicate said restrictions on payments abroad were getting worse and further bank closures were not helping.

Aoun said formal consultations with MPs to nominate a new prime minister and form the cabinet would be held soon. Ahead of the formal discussions, politicians have been trying to agree on the composition of the government to replace caretaker Prime Minister Saad al-Hariri's outgoing cabinet.

Bank branches, which were closed for nearly half of October, shut again as staff went on strike over security fears, a union leader said, citing intimidation by customers demanding access to their money and by protesters who have gathered at banks.

The union, representing bank employees, called for the closure to continue on Wednesday.

The banking association later met union officials and afterwards pledged to work with authorities to provide suitable security to enable staff to resume work. Customer needs would continue to be met through ATMs and call centres, it said.

The economic crisis stems largely from a slowdown of capital inflows which has led to a scarcity of U.S. dollars and generated a black market where the Lebanese pound has weakened below its official pegged rate.

A foreign exchange dealer said a dollar cost 1,820 pounds, about the level on Friday when banks were last open and around 20% weaker than the pegged rate of 1,507.5 pounds. Some retailers used the higher rate for the purchase of goods priced in dollars, although it did not appear on official receipts.

Since reopening on Nov. 1 after a two-week closure, banks have been seeking to prevent capital flight by imposing restrictions on dollar withdrawals and transfers abroad.

Lebanon's central bank said on Monday that bank deposits were secure and it had the ability to preserve the stability of the pegged Lebanese pound.

Hani Bohsali, general manager of Bohsali Foods and president of the Syndicate of Importers of Foodstuffs, Consumer Products and Drinks, which represents around 50 importers, said while some shortages were being felt these were not yet "strategic".

While some payments had been processed since banks reopened, he added: "The trend is negative, it is decreasing".

At a news conference, central bank governor Riad Salameh said on Monday capital controls were not on the table and there would be no haircut - or value-reduction - on deposits.

Schools were also closed on Tuesday, a decision the education minister announced because of calls for a wider strike and out of respect for "students' right to express their views".

Protesters rallied in several towns and cities, and in Tripoli they blocked the main highway linking the northern city, Lebanon's second biggest, to Beirut with burning tyres.

"People are angry, the authorities colluded against us and are delaying us. They are not sympathising with our feelings, nor our pain, nor with the time we are spending on the streets," said one of the protesters, Rabih al-Zein.