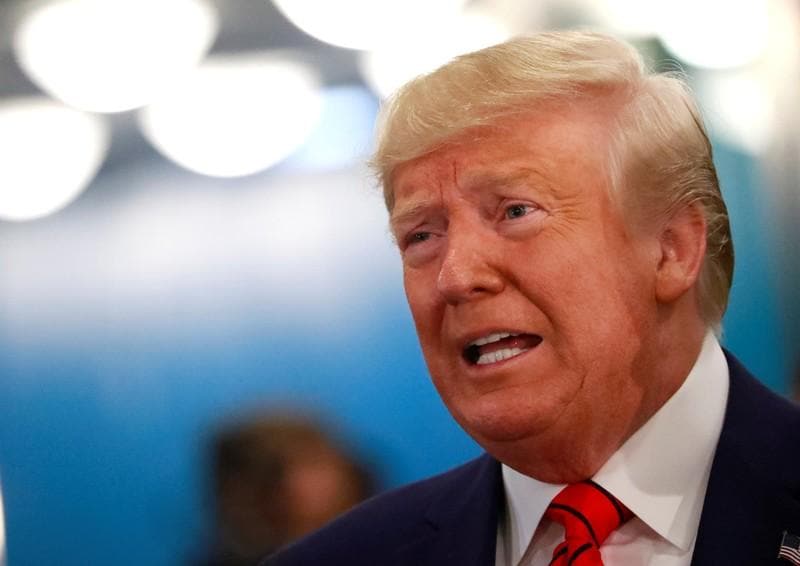 Four days after deputy U.S. and Chinese negotiators held inconclusive talks in Washington, Trump's remarks were anything but conciliatory and emphasized the need to correct structural economic abuses at the heart of the countries' nearly 15-month trade war.

He said Beijing had failed to keep promises it made when China joined the World Trade Organization in 2001 and was engaging in predatory practices that had cost millions of jobs in the United States and other countries.

"Not only has China declined to adopt promised reforms, it has embraced an economic model dependent on massive market barriers, heavy state subsidies, currency manipulation, product dumping, forced technology transfers and the theft of intellectual property and also trade secrets on a grand scale," Trump said.

"As far as America is concerned, those days are over."

Although Trump held out hope that the United States and China could still reach a trade deal, he made clear he wanted a deal that would rebalance the relationship between the two economic superpowers.

"The American people are absolutely committed to restoring balance in our relationship with China. Hopefully, we can reach an agreement that will be beneficial for both countries," Trump said. "As I have made very clear, I will not accept a bad deal."

Trump also recently said he was not interested in a "partial deal" to ease tensions with China, saying that he would hold out for a "complete deal."

U.S. stocks gave up modest gains and fell into negative territory after Trump's U.N. address, which some investors said marked a reversal of the more constructive tone that had surrounded the negotiations last week. [.N]

"Trump's comments to the U.N. were very antagonistic towards China. In the last couple of weeks there's been optimism trade would go in a positive direction," said Chris Zaccarelli, chief investment officer at Independent Advisor Alliance, an investment advisory group based in Charlotte, North Carolina.

"It was the tone and the fact he listed out in great detail all the gripes the U.S. has with China," Zaccarelli said. "All that trade optimism that's been building has been sucked out of the air and replaced with pessimism."

"Soon, the Chinese company obtains patents for nearly an identical product, and Micron was banned from selling its own goods in China," Trump said, "But we are seeking justice."

He added that the United States lost 60,000 factories and 4.2 million manufacturing jobs since China joined the World Trade Organization.

"The rhetoric around China and President Trump's speech was as harsh as we have heard," said Art Hogan, chief market strategist at brokerage National Securities Corp in New York.

Wang is due to speak on U.S.-China relations on Tuesday evening at a business event in New York.

The tone of Trump's speech also was at odds with some recent steps by China to meet his request for purchases of more American farm products. On Monday, Chinese importers bought about 10 shiploads of U.S. soybeans - about 600,000 tonnes.

China's customs commission will exclude certain amounts of U.S. soybeans, pork and other products from its retaliatory tariffs, the official Xinhua news agency said on Tuesday.

The purchases were made following last week's trade talks, which both the U.S. and Chinese sides characterized as "productive." People familiar with the trade talks said no new Chinese proposals were presented, and the countries agreed to continue minister-level talks in early October.

In his U.N. speech, Trump also drew a link between resolving the U.S.-China trade dispute and Beijing's treatment of Hong Kong. Washington was "carefully monitoring the situation in Hong Kong," he said."The world fully expects that the Chinese government will honour its binding treaty made with the British and registered with the United Nations, in which China commits to protect Hong Kong’s freedom, legal system and democratic ways of life," Trump said. Hong Kong was a British colony until 1997.

"How China chooses to handle the situation will say a great deal about its role in the world in the future. We are all counting on President Xi as a great leader," Trump added.

Trump also touched on trade with Japan in his speech, saying that he and Japanese Prime Minister Shinzo Abe on Wednesday would "continue our progress in finalising a terrific new trade deal."

It remains unclear whether the two countries will sign the deal at their bilateral meeting or whether Japanese requests for assurances that Trump won't hit them with autos tariffs will delay the final agreement.