WASHINGTON (Reuters) - U.S. President Donald Trump said on Wednesday it was possible he would emerge from a meeting with Chinese leader Xi Jinping this week with a deal that means there was no need to impose more tariffs on goods from China 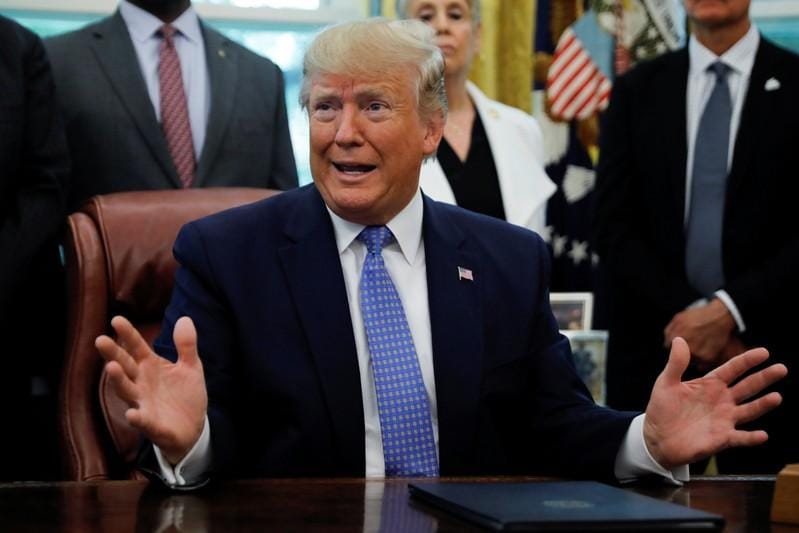 WASHINGTON (Reuters) - U.S. President Donald Trump said on Wednesday it was possible he would emerge from a meeting with Chinese leader Xi Jinping this week with a deal that means there was no need to impose more tariffs on goods from China.

Trump is expected to meet with Xi at the G20 summit in Japan this weekend, in the first meeting between leaders of the world's biggest economies since November.

Relations between the two countries have deteriorated since talks to end a trade war collapsed in May, when the United States accused China of reneging on pledges to reform its economy.

"It's absolutely possible ... We have to get a good deal," Trump said in an interview with Fox Business Network. "It's possible that we'll make a deal but I'm also very happy where we are now."

Negotiators have not met since trade talks broke down, and U.S. and Chinese sources informed on the state of talks have told Reuters the best-case scenario for the Xi-Trump meeting is to resume negotiations.

Trump has previously said he would raise tariffs if there is no progress on the trade dispute at the meeting, and repeated that on Wednesday.

Trump on Wednesday said he could consider placing a 10% duty on another $300 billion or so of Chinese goods rather than 25%.

China and the United States have already imposed tariffs of up to 25% on hundreds of billions of dollars of each other's goods in a trade war that has lasted nearly a year.

Fitch Ratings on Wednesday forecast that world economic output would slow by 0.4 percentage point if Trump slapped 25% tariffs on another $300 billion of imports from China.

The tariffs cover nearly all the remaining Chinese imports into the United States - including consumer products such as cellphones, computers and clothing - and U.S. retailers warn they could boost U.S. consumer prices significantly.

Trump said China knows what the United States needs for a trade deal, and pushed for China to return to the negotiating table with the same concessions they had made before talks abruptly ended in May.

The two sides could agree not to impose new tariffs as a goodwill gesture to get negotiations going, a U.S. official said on Tuesday.

Trump has bipartisan support on taking a tough stance on China, although not for his use of tariffs as a tool to exert pressure on Beijing.

A senior opposition Democrat said on Wednesday he hoped the standoff with China would result in lasting changes.

"We’ve gone this far – we ought to be working to try and have some of the structural changes, some of the advantages, some of the (intellectual property) protections, and China living up to its obligations under the (World Trade Organization)," said Earl Blumenauer.

Blumenauer said he disagreed with what he called Trump's "drive-by tariffs" and hoped the president would not accept a deal that simply involved selling more goods to China rather than changing bilateral terms of trade.

Trump said if Washington was unable to reach a deal, his plan was to reduce business with China. Asked about companies relocating production from China to Vietnam, he said Vietnam treated the United States even worse than China.

The United States is cracking down on companies that have used countries such as Vietnam and Cambodia as staging posts to ship goods from China to the United States without paying tariffs.