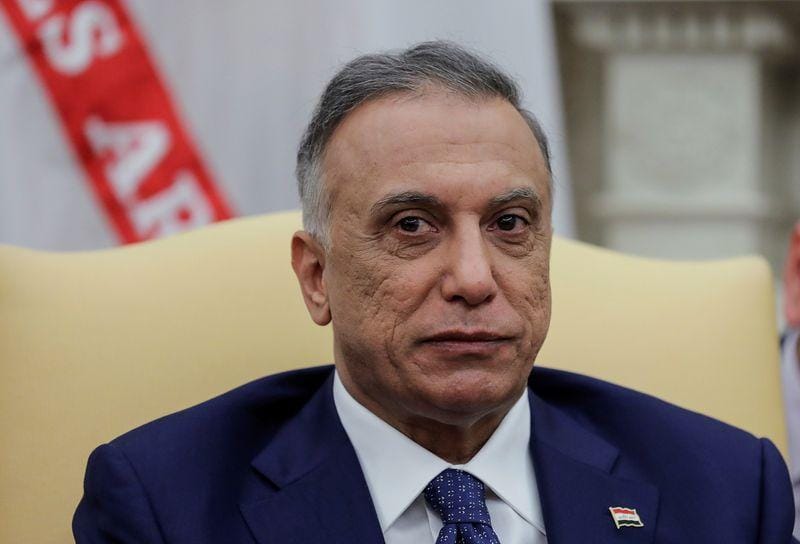 By Jeff Mason and Andrea Shalal

Speaking during his first meeting with Iraqi Prime Minister Mustafa al-Kadhimi, Trump said he looked forward to the day when U.S. troops could exit the country, but said U.S. businesses were already making "very big oil deals" there.

"We'll be leaving shortly," Trump told reporters. "We have very few soldiers in Iraq ... but we're there to help. And the prime minister knows that," Trump said. "If Iran should do anything, we will be there to help the Iraqi people."

The president declined to lay out a timetable for a full withdrawal.

Trump's first meeting with the Iraqi leader comes amid a new spike in tensions between Washington and Tehran after Washington said it would seek to reinstate all previously suspended U.S. sanctions on Iran at the United Nations.

Al-Kadhimi, who has challenged the power of Iran-aligned armed groups in Iraq, took office in April, becoming the third Iraqi head of state after months of deadly protests in a country exhausted by decades of war, corruption and economic challenges.

Washington is pressing for an extension of a U.N.-imposed arms embargo against Iran that is due to expire in October under Tehran's 2015 nuclear deal with world powers, which the United States quit in 2018.

U.S. Secretary of State Mike Pompeo told reporters the United States was working with Iraqi officials to get the number of U.S. troops in Iraq "down to the lowest level as quickly as we can." The United States has had around 5,000 troops stationed in the country, and coalition allies another 2,500.

Al-Kadhimi told reporters that Iraq was in discussions with Turkey over what he called its "unacceptable" involvement in northern Iraq. Iraq's constitution explicitly banned use of its territory to attack any neighboring country, he said.

The United States and Iraq in June affirmed their commitment to the reduction of U.S. troops in Iraq in coming months, with no plans by Washington to maintain permanent bases or a permanent military presence in Iraq.

Since 2014, the primary mission of U.S. troops deployed in Iraq has been defeating the Islamic State militant group. Officials in the U.S.-led coalition say Iraqi forces are now mostly able to handle the insurgents on their own.

Iraq’s parliament had voted earlier this year for the departure of foreign troops from Iraq, and U.S. and other coalition troops have been leaving as part of a drawdown.

Even as U.S. forces exit Iraq, U.S. energy companies are expanding their investments in the oil-rich nation, which has been hard hit by the COVID-19 pandemic and low oil prices.