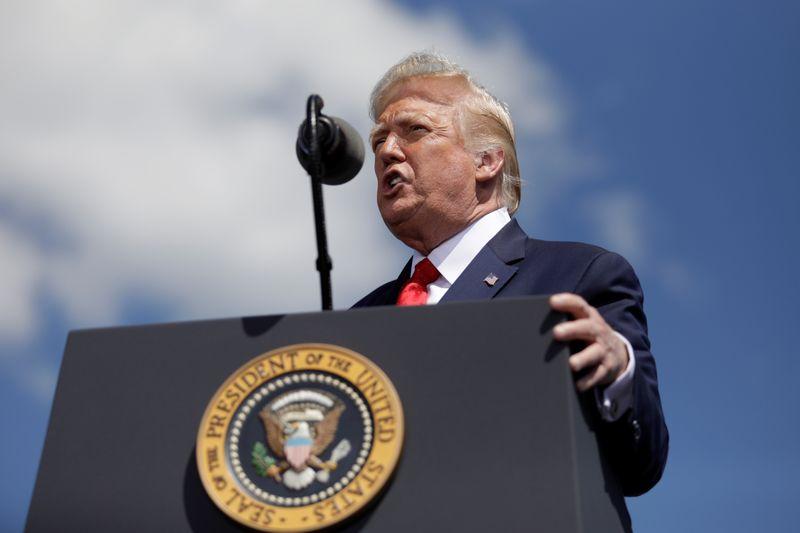 By Alexandra Alper and Andrea Shalal

MANKATO, Minn./WASHINGTON (Reuters) - U.S. President Donald Trump on Monday vowed to create 10 million jobs in 10 months, in part by setting up tax credits for U.S. companies that relocate manufacturing facilities to the United States from China.

Trump, seeking to build support ahead of the Nov. 3 election, told supporters during a visit to Mankato, Minnesota, his administration would also strip federal contracts from companies that outsourced work to China.

"We will create tax credits for companies that bring jobs from China back to America," Trump said during an hourlong speech. He also predicted the U.S. economy would bounce back strongly from the economic shock caused by the coronavirus pandemic - as long as he was re-elected.

"What we're doing together is nothing short of an economic miracle and now we're doing it again," Trump told cheering supporters. "We built the greatest economy in the history of the world and now I have to do it again."

Trump hailed increased retail sales in recent months. But data released last week showed U.S. retail sales increased less than expected in July as consumers cut back on purchases of motor vehicles. They could slow further in the months ahead amid spiraling new COVID-19 infections and a cut in unemployment benefit checks.

The Trump administration is taking action on multiple fronts to rebalance U.S. economic ties with China, including through restrictions on Chinese firms like technology giant Huawei, bans on popular apps like TikTok, and a spate of executive orders aimed at ensuring domestic production of key products.

At the time, the administration is using "Buy America" requirements and incentives to persuade U.S. firms to bolster domestic supply chains, especially for critical supplies, such as drugs and medical equipment.

The Republican president, who is trailing Democrat Joe Biden in the polls, said his tax cuts and other measures were strengthening the U.S. economy despite the pandemic.

He said the administration planned further tax cuts, and reductions in regulations to encourage more investment at home, but gave no specific details.

"We will end our reliance on China, we will make our critical drugs and supplies right here in the United States," he said, in an apparent reference to an executive order signed last month to boost production of medicines and medical equipment.