By David Alexander and Humeyra Pamuk WASHINGTON (Reuters) - President Donald Trump said on Thursday his administration is planning a 'giant package' related to ethanol that would please U.S. farmers angry that many more oil refiners have been freed from obligations to use the corn-based fuel. Clashes between farmers and the oil industry over biofuel policy have posed a challenge for Trump, who is counting on both constituencies for political support ahead of next year's presidential election. 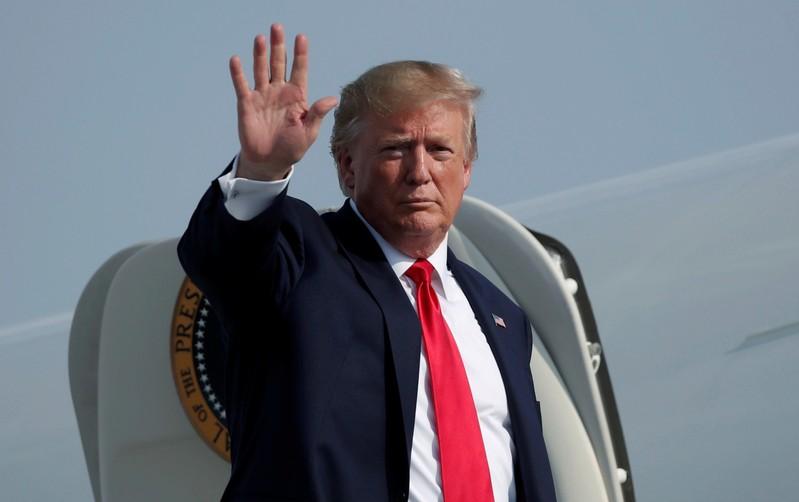 By David Alexander and Humeyra Pamuk

WASHINGTON (Reuters) - President Donald Trump said on Thursday his administration is planning a "giant package" related to ethanol that would please U.S. farmers angry that many more oil refiners have been freed from obligations to use the corn-based fuel.

Clashes between farmers and the oil industry over biofuel policy have posed a challenge for Trump, who is counting on both constituencies for political support ahead of next year's presidential election.

U.S. farmers and ethanol producers have ramped up pressure on Trump over the past few weeks to quickly take steps to boost ethanol demand. The oil industry struck back, saying such moves would increase costs for refiners and could reduce manufacturing jobs.

"The Farmers are going to be so happy when they see what we are doing for Ethanol, not even including the E-15, year around, which is already done," Trump said on Twitter. "It will be a giant package, get ready! At the same time I was able to save the small refineries from certain closing. Great for all!"

Trump did not offer details on what the "giant package" would entail. The E15 mentioned by Trump is a higher-ethanol blend of gasoline.

The U.S. Renewable Fuel Standard requires refiners to blend biofuels like ethanol into their fuel, but allows the U.S. Environmental Protection Agency (EPA) to grant waivers from the obligation to financially troubled small facilities.

The EPA announced this month a decision to grant 31 such waivers to refineries, a level the corn lobby called excessive, saying it would undermine biofuel demand.

Trump last week directed Agriculture Secretary Sonny Perdue, EPA chief Andrew Wheeler and a few White House advisers to come up with a solution that would boost biofuel demand in the wake of the EPA waiver decision. Among the proposals was to ramp up biofuel blending quotas slightly, but there has been disagreement over when to apply the increase, sources said.

Perdue said on Wednesday he also proposed strengthening U.S. infrastructure to allow more widespread use of E15. The Trump administration in June lifted a summertime ban on E15 use that had been imposed by the administration of Democratic former President Barack Obama to combat smog.

The oil industry, which dislikes the biofuel mandates because they cut into its market share, has said it would oppose any efforts to further bolster ethanol.

On Thursday, Chet Thompson, president and the CEO of American Fuel and Petrochemical Manufacturers (AFPM), the largest U.S. oil refining association, said any reallocation and raising of biofuel blending quotas would be "bad policy and unlawful."

Thompson warned in a conference call that this would "raise the cost of compliance for refiners and raise the cost of fuel for consumers." He dismissed farmers' argument that waivers hurt biofuel demand, citing data from the U.S. Energy Information Administration (EIA) showing ethanol consumption for the first five months of 2019 was its highest since at least 2010. The mandate was put in place in 2005.

"We hope to be able to convince the president to change tack...He is being misinformed, he is being misguided by some of his closest advisors," he said, adding that if persuasion fails, the industry will not refrain from court action.

On Wednesday, the chief executives of three major refiners - Valero Energy, Marathon Oil and Flint Hills Resources - wrote a letter to Trump, saying waivers did not cause a reduction in ethanol demand and they were also not the reason the biofuels industry was in dire straits.

"We urge you to prevent other changes to the RFS that would threaten the viability of our Nation's refineries," they said.

(Reporting by David Alexander and Humeyra Pamuk; Writing by Richard Valdmanis; Editing by Lisa Lambert, Will Dunham and David Gregorio)