By Jeff Mason and Michel Rose BIARRITZ, France (Reuters) - Iran's foreign minister flew into the French resort hosting a G7 summit on Sunday, an unexpected twist to a meeting already troubled by differences between U.S. President Donald Trump and Western allies over a raft of issues, including Iran. A White House official said France's invitation to Mohammad Javad Zarif for talks on the sidelines of the meeting in the Basque beachside town of Biarritz was 'a surprise', and there were no immediate plans for U.S. 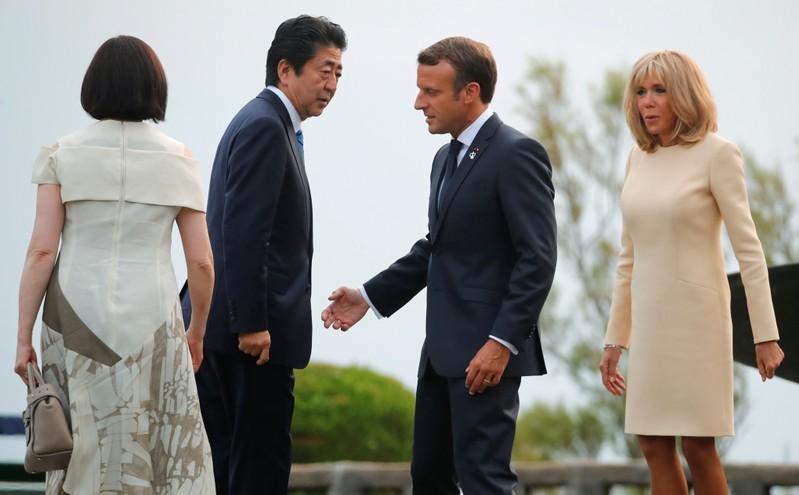 By Jeff Mason and Michel Rose

BIARRITZ, France (Reuters) - Iran's foreign minister flew into the French resort hosting a G7 summit on Sunday, an unexpected twist to a meeting already troubled by differences between U.S. President Donald Trump and Western allies over a raft of issues, including Iran.

A White House official said France's invitation to Mohammad Javad Zarif for talks on the sidelines of the meeting in the Basque beachside town of Biarritz was "a surprise", and there were no immediate plans for U.S. officials to meet him.

Zarif went straight into talks with his French counterpart to assess what conditions could lead to a de-escalation of tension between Tehran and Washington, a French official said.

European leaders have struggled to calm a deepening confrontation between Iran and the United States since Trump pulled his country out of Iran's internationally brokered 2015 nuclear deal and reimposed sanctions on the Iranian economy.

Earlier on Sunday at the summit, Trump appeared to brush aside French efforts to mediate with Iran, saying that while he was happy for Paris to reach out to Tehran to defuse tensions he would carry on with his own initiatives.

French President Emmanuel Macron, who has taken the lead in trying to defuse tensions, fearing a collapse of the nuclear deal could set the Middle East ablaze, met Zarif on Friday. The aim was to discuss plans to ease the crisis, including reducing some U.S. sanctions or providing Iran with an economic compensation mechanism.

Iran wants to export a minimum of 700,000 barrels per day of its oil and ideally up to 1.5 million bpd if the West wants to negotiate with Tehran to save the 2015 deal, two Iranian officials and one diplomat told Reuters on Sunday.

Trump insisted on Sunday that he was getting along well with other leaders of a group that also includes Britain, Canada, France, Germany, Italy and Japan.

But rifts emerged on issues from his quickening trade war with China to the nuclear ambitions of both Iran and North Korea, and the question of whether Russia's President Vladmir Putin should be readmitted to the group.

Russia was excluded from what used to be the G8 in 2014 after it annexed Ukraine’s Crimea and then backed an anti-Kiev rebellion in the industrial region of Donbas in eastern Ukraine.

A European official who declined to be named said Russia was the thorniest issue discussed at a dinner on Saturday.

"(The conversation) became a bit tense over this idea of the G7 being a club of liberal democracies ... that point was clearly not shared by the U.S. president," the official said.

Trump's argument was that on a number of issues, like Iran and Syria, it made more sense to have Putin involved in the talks given that it is a key player there.

"You're doing well," Johnson said on the sidelines of the summit. "You did very well last night, my God, that was a difficult one, you did really, you did really well."

The G7 gathering is taking place against a backdrop of worries that a global economic downturn could be exacerbated by the escalating tariff war between Washington and Beijing.

Britain's Johnson voiced concern on Saturday about creeping protectionism and said those who support tariffs "are at risk of incurring the blame for the downturn in the global economy". Sitting across from Trump on Sunday, he said: "We're in favour of trade peace on the whole, and dialling it down if we can."

Italian Prime Minister Giuseppe Conte warned other leaders of the dangers of protectionism and urged Washington not to carry through on its threat to impose tariffs on German autos.

However, the White House doubled down on its aggressive stance towards trade with China.

White House spokeswoman Stephanie Grisham, explaining what Trump meant at a news conference when he said he had second thoughts after he had raised tariffs on Chinese tariffs last week, said he meant that he wished he had raised them higher.

Underlining the multilateral discord even before the summit began, Trump threatened the meeting's host, saying Washington would tax French wine "like they've never seen before" unless Paris dropped a digital tax on U.S. technology companies.

Looking to broaden the scope of the debate, Macron has invited several African leaders to discuss problems facing their continent, while leaders from India, Australia, Chile and Spain are due to attend a dinner on Sunday where the focus will be on the environment and other issues.

However, senior U.S. officials accused Macron of looking "to fracture the G7" by focusing on "niche issues" rather than major global concerns.

France denied this, pointing to Sunday's initial session covering the economy, trade and security - areas that used to draw easy consensus but are now sources of great friction.

Trump up-ended last year's G7 meeting in Canada, walking out early and disassociating himself from the final communique.

Trump, who prizes his relationship with North Korean leader Kim Jong-un, told reporters the launches did not violate an agreement and were in line with what others were doing. Abe, sitting across from him, said they breached U.N. resolutions.

At the start of the day, Trump said Britain would have a major trade deal with Washington after it leaves the European Union. Asked what his advice on Brexit was for Johnson, he replied: "He needs no advice, he is the right man for the job".

While the transatlantic rift is the most stark, there are also deep divisions within the European camp, with Johnson making his G7 debut at a time when he is struggling to persuade EU capitals to renegotiate Britain's exit from the bloc, which Johnson has said will happen on Oct. 31 come what may.