By Steve Holland and Lisa Lambert WASHINGTON (Reuters) - Even as they reject talk of a looming recession, President Donald Trump and his advisers are examining ways to provide a boost to the U.S. 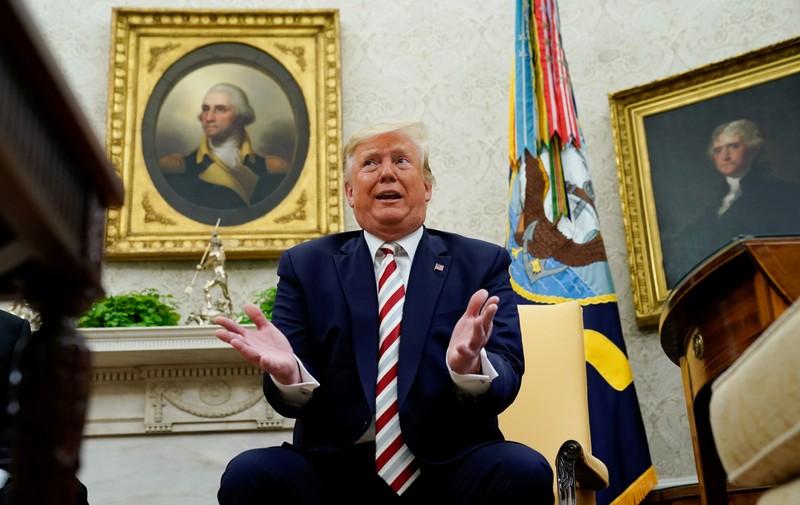 By Steve Holland and Lisa Lambert

WASHINGTON (Reuters) - Even as they reject talk of a looming recession, President Donald Trump and his advisers are examining ways to provide a boost to the U.S. economy should it be deemed necessary, officials said.

"We're very far from recession," Trump told reporters in the Oval Office, echoing a theme from him and his team that the fundamentals of the U.S. economy are strong.

But aware of how dangerous a recession could be to his re-election prospects in 2020, Trump has been looking at options for a stimulus behind the scenes.

Trump and his advisers have discussed the possibility of a payroll tax cut, which would give workers an immediate boost to spending but would add to U.S. deficit spending.

The option emerged from a meeting Trump had with his economic team on Monday. It was not viewed seriously, given it would be hard to get through the U.S. Congress, an administration official said.

Millions of U.S. workers pay payroll taxes on their earnings to finance the Medicare health insurance program for the elderly and Social Security, which provides income payments for retirees.

Trump said on Tuesday another option he is thinking about is indexing capital gains, which would provide a tax cut on profits from selling assets such as stocks, but that he was not talking about doing anything imminently.

Some conservatives, such as anti-tax crusader Grover Norquist, believe Trump has the regulatory authority to add an inflation adjustment to the calculation of capital gains taxes.

Such a step would likely be seen by Democrats as an attempt to circumvent the authority of the U.S. Congress and prompt a court fight.

Trump's senior economic adviser Larry Kudlow has been arguing behind the scenes that the United States should return to taxpayers the tariff money collected by higher tariffs on Chinese imports, an official said.

Republican Senator Rick Scott of Florida has offered legislation on this point.

There has been no clarity on how such a move would be carried out since China does not pay tariffs directly to the U.S. Treasury. The tariffs are paid by American companies when Chinese products enter the United States.

Trade tensions with China have stoked concerns that the U.S. economy is heading for a downturn, which could dampen Trump's prospects for re-election in 2020.

Trump said he would not need the approval of Congress to link the tax on profits from asset sales, known as capital gains, to inflation. According to tax code experts, investors would pay far less capital gains tax under an inflation index.