Trimming male crew: GoAir's cost-cutting strategy may not be practical

New Delhi: No male pursers will be hired from now on by GoAir, since males are heavier compared with females, add to the aircraft weight and therefore to the airline's costs. So says a story in the Times of India this morning, citing GoAir CEO Giorgio De Roni.

What next? Will GoAir begin charging passengers too according to their weight and not per seat? Will it prefer female passengers and children to male ones? It might also occur to the airline to recruit only female commanders and co-pilots - again because females are lighter!

In fact, the comments of De Roni could give other low cost carriers in India some not-so-pleasant ideas of how to reduce aircraft weight.

Airlines across the world are doing crazy things to cut down weight on the aircraft and save fuel but a ban on male pursers is surely a new chapter in this weight reduction saga! 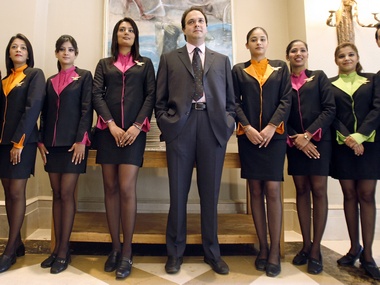 World over, most airlines anyway prefer female cabin crew and are overwhelmingly tilted towards the 'fairer sex' while recruiting for the cabin but never have we heard of an airline CEO actually coming out and saying that males are not needed at all.

The story in TOI says every additional kg on board costs Rs 3 per flight hour and since male pursers are 15-20 kg heavier than their female counterparts, the airline could save about Rs 2.5 crore to Rs 3 crore annually by making their cabin crew male free.

Unfortunately, out of 10 cabin crew members, four are males as of now but GoAir says these privileged males will continue to serve on board.

A former executive director with a legacy carrier says that the decision on whom to hire as cabin crew is the airline's prerogative but eliminating male pursers is really not a practical idea.

"There are umpteen number of things an airline can do to reduce weight. For example, it can reduce the weight of food and water that is carried on board, use lighter cutlery, uplift only as much fuel as is necessary depending on flight duration etc. GoAir uses Airbus 320 fleet which means it would have, on an average, four crew members per domestic flight. If even one of them is male, does it make such a huge difference to aircraft weight?"

The TOI story says at present 40% of the airline's cabin crew are male but they will not be asked to leave. It also says that besides banning recruitment of men to the cabin, the airline is also restricting things like weight of magazines and how much water it carries on board. Perhaps we now need male activists to take up their cause on board GoAir!

The story of what all happens to cabin crew members doesn't end here though. Aviation regulator DGCA is promising more action in the coming days on defining who can or cannot be hired as cabin crew in any airline. DGCA sources told Firstpost today that the regulator will soon come out with a CAR (Civil Aviation Requirement) on cabin crew health which will include specifications about weight, height etc.

A source in DGCA said that if any cabin crew member - male or female - gets overweight or is detected with lifestyle diseases such as diabetes or high blood pressure, the airline will have no option but to ground him or her. Sadly, the decision to hire only female cabin crew does not violate any of the country's laid down laws and therefore DGCA will not seek an explanation from GoAir.

Why do we need slim and pretty women to serve us drinks or snacks on board. They do please the eye but the reasons are more genuine than mere appearance. An aviation industry veteran pointed out that tall crew members are helpful for passengers in opening overhead bins -which are usually placed quit high in the aircraft - and in assisting passengers in other functions as well.

"Besides, if they gain weight, it shows less. And staying within weight limits also means the crew member is most likely free of any lifestyle disease," this person said.

Now, with DGCA about to issue a draft CAR which will need not only a tall, slim and healthy crew member but also require him or her to undergo annual medical checkups at certified facilities, things could get slightly tougher for the female cabin crew aspirants as well.

The DGCA source quoted earlier said Air India cabin crew members are expected to protest any CAR specifying weight etc since that airline has the maximum number of overweight airhostesses. "These mandatory health checkups are done in Europe and Australia but not in the USA since employee unions are very strong there. We need to bring a system where only healthy cabin crew is employed on flights".

So aspiring male pursers will have one less airline to find a job with while both male and female cabin crew need to get in shape to remain in the air.