On Monday evening after replacing Cyrus P Mistry as chairman of Tata Sons, interim chairman Ratan Tata wrote a letter to his employees informing them about the ouster and ensuring them that it is "in the interest of the stability of" the company. Taking control of the $100 billion coffee-to-steel business empire, Tata informed his employees that a new management structure is being put into place and a selection committee is being constituted to find the next chairman. Tata has four months to do so, according to his letter.

The company statement released earlier on Monday announced the board's decision to replace Mistry. It said, "Tata Sons today announced that its Board has replaced Mr Cyrus P Mistry as Chairman of Tata Sons. The decision was taken at a board meeting held here today."

According to CNBC TV18, Tata Sons board took decision to replace Mistry based on recommendations of principal shareholders. However, there will be no change in the CEOs positions at operating level in the group.

Mistry was earlier managing director of the Shapoorji Pallonji Group. Under his leadership, Shapoorji Pallonji’s construction business grew into a billion-dollar enterprise, evolving from pure-play construction to execution of complex projects in the marine, oil and gas, and rail sectors, across a number of international geographies. 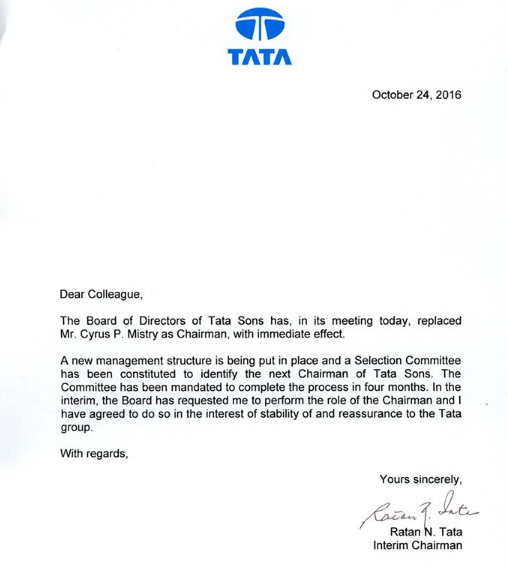 A copy of Ratan Tata's letter to his employees.