There's a bit of innovation in every Indian's life

It is well-known that Indians are inquisitive by nature. Here is perhaps the first empirical evidence of that.

The result: India was found to be a convincing leader, with the United States taking the second slot and Singapore, Canada, South Korea, and the United Kingdom coming in next. The United States, Canada and the UK owe their rankings in the table to their interest in the funding and exploitation of innovation, and terms that include the root term "create".

It begs the next question. Can India lead the next wave of innovation? 'Innovation' is the conversion of information into valuable knowledge and ideas and subsequently into a significant benefit that may take the form of new or improved products, processes, or services.

INSEAD, a Paris-based business school, is behind the Global Innovation Index released each year. In a detailed report, countries are ranked on diverse aspects. India's rank fell six places to 62 in 2011.

The innovation index report goes into the specifics of the rankings. The fact remains that India scores poorly among 135 countries on input factors like execution, human capital and business sophistication, among others. But when it comes to output, it's a little better on scientific and creative lines.

India's report card so far on innovation - which includes initiatives like Unique Identification Database and other initiatives - is included in a chapter on Innovation in India onwww.globalinnovationindex.org.

The biggest acknowledgment came from World Bank when it stated in the past that India's national output could be 4.8 times bigger if Indian companies are able to absorb and use the knowledge that already exists in the economy. "Traditionally, for India and Indians, innovation has been known as 'jugaad'," says R Gopalakrishnan, director at Tata Sons, the flagship of the Tata Group. "Jugaad, innovative quick fix, has led to cost savings and introduction of new products and services in the Indian market," he adds. The 'Simputer,' (short for simple computer), slated to cost Rs 9000 , is the first indigenously built pocket computer of its kind in India. AFP

He asserts that the Tata Group innovations would continue to help improve product and services for the 'Bottom of Pyramid' as well as global customers. He cites innovation within his own group of 'Nano', a low-cost car for the Indian market. The group launched 'Tata Swach', an initiative that came from a research backed by IT services company TCS and Tata Chemicals. The purifier does not need running water or electricity and conforms to global standards on potable water purity offering drinking water at 20 paise a day (less than half a cent).

The Tata Group, however, is an exception and not a norm in India. "The India innovation brand is built over selective success stories," says Soumitra Dutta, professor of information systems at INSEAD.

Dutta points out that the Indian outsourcing model led by IT services firms, the innovation by the Tata Group, Indian Institutes of Technology and Sciences are some select pockets of excellence. Apaper presented in April 2011 titled 'The Global Redistribution of Innovation: Lessons from China and India', by Adrian Ely and Ian Scoones of the UK-based think-tank Steps Centre, makes a relevant point.

"While the successes of the outsourcing model cannot be denied, is this resulting in a longer-term shift to more embedded innovation? Or is India, as some have argued, just selling Indian IQ on the cheap for the benefit of foreign intellectual property (IP)?," the paper asks.

For example, Indian drug companies are happy innovating to the extent of making generic drugs. Some have taken steps to do collaborative research with global big pharma firms. A large number of PhDs and engineers are employed by Fortune 500 companies at their facilities in Bengaluru for research.

When it comes to spending on research, Indian companies do not even spend 5% of the net sales on research. The average Indian capital spend on research and development is not even $1 billion for top 50 non-finance companies by revenue.

Gopalakrishnan does not think companies are spending less. See his interview.

"There is no other choice than to invest in R&D for Indian companies. However, such a shift needs a significant attitude change and is not easy," Dutta adds.

He also points out that the shortage of PhDs or qualified staff and lack of incentives from the government make the transition a lot slower. "India needs to learn from Singapore when it comes to offering incentives to companies on research," he adds.

"The role of the government must emphasise risk mitigation for private sector's drive for market-driven innovation," Gopalakrishnan says further. 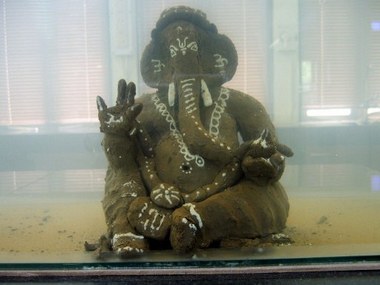 An idol of Hindu deity Ganesha, which is made of lake silt, is being tested so that the city waters can be saved from pollution. Ganesh idols are immersed in water. AFP

At the heart of success in innovation lies the ability of a country to link educational institutes, laboratories with the industry. Gopalakrishnan believes that non-availability of sharing mechanism among government bodies like Council for Scientific and Industrial Research (CSIR), Defence Research and Development Organisation and others has led to development of islands of information.

Dutta thinks that such a collaboration in India is just evolving. He points out that India's rank was 52 on linkages between research institutions and the industry.

Gopalakrishnan pointed out that PepsiCo India and the Punjab Agricultural University have co-developed a tractor-driven machine to systematically implement direct seeding of rice (DSR), an eco-friendly technique that can reduce water use in rice paddies by 30% and cut carbon emissions by 70%.

This perhaps indicates that such a collaboration is evolving steadily.

Another key aspect why the US has been so successful in university and industry linkages is the presence of angel investors. These investors put in small amounts of money into new product or business ideas. In 2010, the US witnessed 61,900 angel investment deals, according to a report in The Economic Times citing the Centre for Venture Research data. "In India, that number in the same year was barely 500," says Sasha Mirchandani, founder of Mumbai Angels.

A long way to go, indeed!