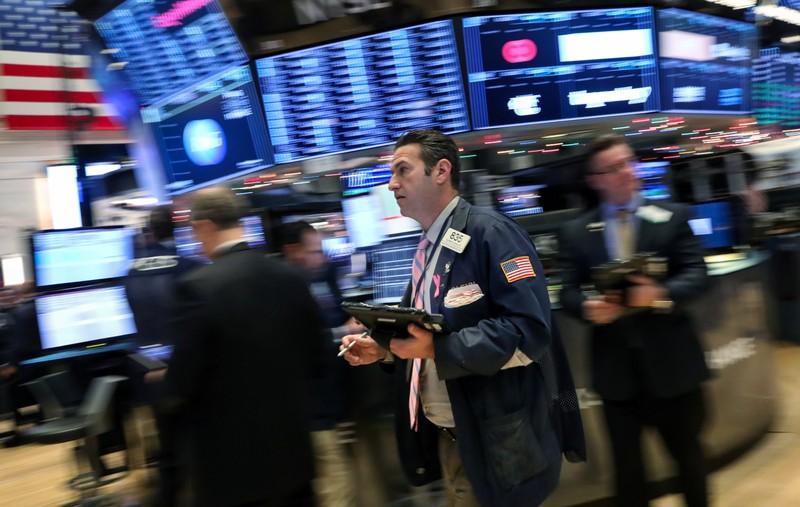 (Reuters) - U.S. stocks rose roughly 0.5 percent on Tuesday after losing about 2 percent in each of the past two days, helped by gains in the technology sector, upbeat earnings reports and a rebound in some bellwether stocks such as Boeing and J&J.

The focus, though, is on the Federal Reserve, which kicks off its two day monetary policy meeting amid a host of calls, including from President Donald Trump, to pause its tightening cycle or risk harming the U.S. economy, or indeed the global economy.

The S&P 500 is nearly 13 percent below its record high, trading in what is called correction territory, and ended Monday at a 14-month low. The benchmark index has struggled to hold onto gains in a particularly volatile December in the backdrop of worries about global growth, rates and the China-U.S. trade war.

With a widely expected fourth rate hike for the year on Wednesday, financials – the worst performing S&P sector this month – rose 0.36 percent.

"All eyes are on the Fed meeting tomorrow. Today can be best characterized as a relief rally and probably some dip-buying," said Massud Ghaussy, senior analyst at Nasdaq IR Intelligence in New York.

"Equity markets seem to come across as cheap, so I think from a valuation and technical standpoint it's perhaps a good day to buy."

Nine of the 11 major S&P sectors were higher. The biggest lift to the market came from the recently beaten-down technology index, which gained 0.58 percent.

A dividend hike and a higher share repurchase program helped Boeing Co snap a three-day losing streak to rise 4 percent. The stock was the biggest boost to Dow Industrials.

Other marquee stocks moving higher included Amazon.com Inc, up 0.9 percent, and Facebook Inc, up 2.1 percent. They were the biggest boosts to the S&P and the Nasdaq.

Energy, the second-worst performing sector this month, tumbled another 1.23 percent as oil prices sank after reports of swelling inventories. [O/R]

Johnson & Johnson rose 1.4 percent, after a near 13 percent drop over two days on a Reuters report that J&J knew for decades that its Baby Powder contained asbestos.