By Medha Singh (Reuters) - U.S. stocks shrugged off a faltering start to rise over 2 percent on Wednesday, as a rebound in technology shares and an Amazon-led jump in retailers put the market on pace to snap a four-session losing streak 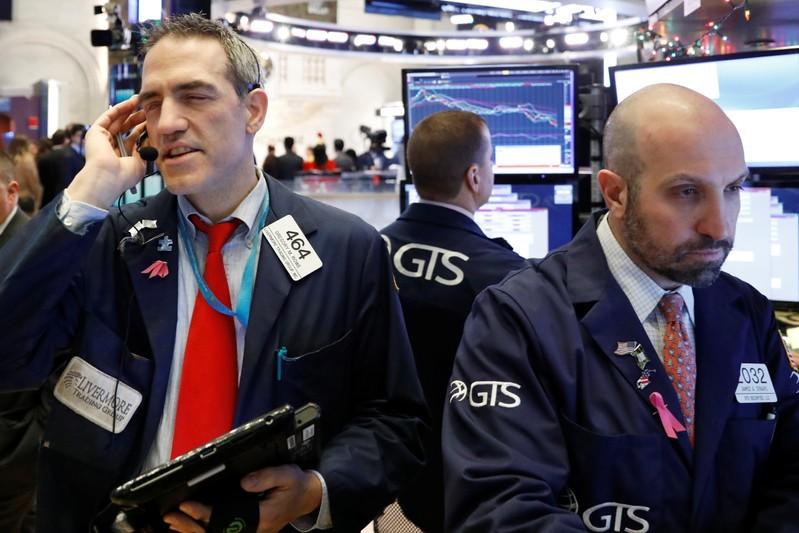 (Reuters) - U.S. stocks shrugged off a faltering start to rise over 2 percent on Wednesday, as a rebound in technology shares and an Amazon-led jump in retailers put the market on pace to snap a four-session losing streak.

The benchmark S&P 500 <.SPX> is on track for its biggest one-day percentage jump since March, while the Dow Industrials is clocking its best day in five weeks as both the indexes retreat from the brink of bear market territory.

The gains were led by technology stocks <.SPLRCT>, which rose 2.93 percent. Their 9.2 percent slump in the past four sessions was the steepest among the 11 major S&P sectors, while the S&P 500 has lost 7.7 percent in that period.

The strong gains come after the Dow and S&P flitted between gains and losses earlier. At its session low, the S&P came two points shy of a bear market, measured by a drop of over 20 percent from a closing high. The index is still clocking its biggest percentage drop in any December since the Great Depression and roughly three quarters of its stocks are in bear market.

The Dow finished Monday 18.9 percent lower than its closing high, not far off from joining the Nasdaq, the Dow Jones Transport Average <.DJT> and small-cap Russell 2000 index <.RUT> in bear market territory.

"It seems like a bear-market rally. Usually they don't last very long, but this could continue till the month ends," Peter Cardillo, chief market economist at Spartan Capital Securities in New York.

"We are in a bear market and when that happens the whole market gets cheap. Investors will likely go for low (valuation) names because they could get into the market that way without getting into trouble."

All 11 S&P sectors ended Monday lower for the year after the four-day slide. All 11 were higher for the day, with the defensive real estate <.SPLRCR>, consumer staples <.SPLRCS> and utilities <.SPLRCU> notching the smallest gains.