Strike by 10 trade unions begins; transport, banking to be hit

New Delhi: Essential services such as banking and transport are likely to be hit today as 10 central trade unions go on one-day nationwide strike, protesting against "anti-worker" changes in labour laws and the Centre's "indifference" to their demands for better wages.

"The strike is on. We are getting good response. More information will pour in after sometime. Around 90 per cent
workers at BHEL's plant in Tiruchirapalli have not reported at work in the morning shift," Centre for Indian Trade Unions (CITU) General Secretary Tapan Kumar Sen said. 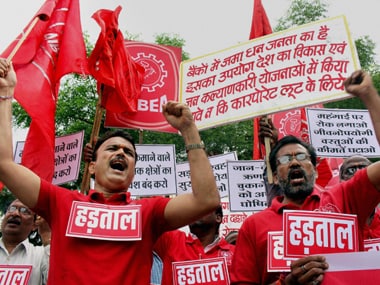 He further said, "Vizag steel plant is 100 percent closed. At some places there would be instances of 'Rail
Roko'. This is going to be a successful strike as more than 15 crore workers will come on streets to protest."
Last year, these 10 trade unions had called nationwide strike and around 15 crore workers participated in the
agitation.

Sen further said, "Gurgaon industrial area is completely closed and the police have arrested about 12 people in
Manesar area. All this information indicates that the strike will be bigger this time."

All major unions, excluding RSS-associated BMS (Bhartiya Mazdoor Sangh), have joined the strike call, terming the
government's assurances to look into their demands and the recent announcements for two-year bonus and hike in minimum wage as "completely inadequate".

On its part, the government has asked all ministries to ensure that public utilities and essential services are not
affected. Secretaries of all departments have been asked to take effective measures for smooth running of various services coming under their respective ministries.

Yesterday, speaking to reporters in Mumbai, Labour Minister Bandaru Dattatreya blamed the previous UPA regime for
the issues faced by the workers and said the present government "doesn't want a confrontation with labour unions"
and rather needs their cooperation and support.

He had conceded banking and insurance sectors are likely to be impacted more due to the strike today, while adding that out of 12 demands of the trade unions, eight are related to the labour department and seven of them have been agreed to.