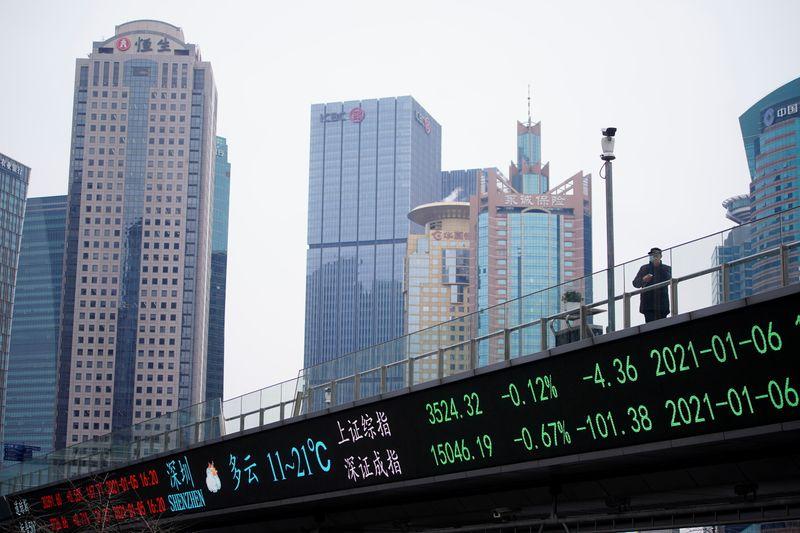 U.S. Treasuries prices extended their steepest selloff in months, with the benchmark yield at its highest in 10 months, after victories in two Georgia races handed the Democratic Party narrow control of the U.S. Senate, bolstering Biden's power to pass his agenda as his party controls both chambers.

The MSCI world equity index, which tracks shares in almost 50 countries, rose over 1% to hit a record high for the third session this week.

A shaken Congress formally certified Biden’s election victory in the early hours of Thursday, after hundreds of President Donald Trump's supporters had stormed the U.S. Capitol.

The shocking images of the assault had earlier knocked sentiment, though traders focused on the implications of the Democrats' control of Congress.

On Wall Street, major indexes hit record highs on bets that more pandemic stimulus under a Democrat-controlled U.S. government will help the economy ride out the downturn.

Earlier, MSCI's broadest index of Asia-Pacific shares outside Japan had risen 0.35% and Japan's Nikkei hit its intraday highest since 1990 before ending up 1.6%.

The prospect for future stimulus spending sent bond prices lower, with the yield on the benchmark hitting its highest since March. It rose as high as 1.088% on Thursday. [US/]

The Democrats' victory reverberated in currency markets, too.

The dollar had sunk on the Senate vote results to a near three-year low against a basket of six major currencies, with traders betting growing U.S. trade and budget deficits would further weigh on the greenback.

"Once the (Treasury yields) start to move, as they did yesterday, it wasn’t a big move but it was in the right direction, that is the direction of the future," said Joseph Trevisani, senior analyst at FXStreet.com.

Oil prices touched their highest since late February on a fall in U.S. stockpiles and in the wake of a pledge by Saudi Arabia to cut output by more than expected.