By Herbert Lash NEW YORK (Reuters) - Gold prices rose and a gauge of global equity markets hit a record high on Thursday in light holiday trade as a year-end rally in stocks remained on course, with optimism over U.S.-China trade helping drive Wall Street to records. 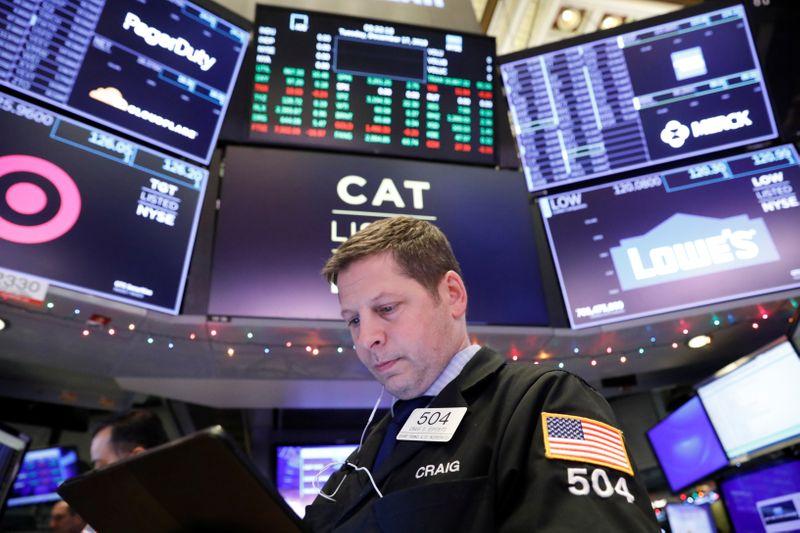 NEW YORK (Reuters) - Gold prices rose and a gauge of global equity markets hit a record high on Thursday in light holiday trade as a year-end rally in stocks remained on course, with optimism over U.S.-China trade helping drive Wall Street to records.

Oil rose to three-month highs, buoyed by a report showing lower U.S. crude inventories, hopes the pending Sino-U.S. trade deal will soon be signed and efforts by the Organization of the Petroleum Exporting Countries to curb crude supply.

Boxing Day holidays closed markets in Commonwealth countries around the world while a second Christmas Day shuttered markets in a swath of European countries.

Overnight in Asia, equity markets rose, with China shares closing higher after Beijing laid out further plans to bolster its economy, including some $385 billion in planned infrastructure investments.

Stocks on Wall Street rallied, with the benchmark S&P 500 and Nasdaq composite setting record intraday peaks. The S&P 500 is about 1 percentage point short of its best year since 1997.

"People are pretty happy with this year," he said.

Fourth-quarter earnings will soon come into focus in January, which should highlight whether sentiment among corporate management has improved, Abbasi said.

Recession fears scuttled capital expenditure plans during much of 2019 but strong employment and signs of an improving global economy suggests that will change next year.

The number of Americans filing applications for unemployment benefits fell last week in a sign of ongoing labour market strength.

Earlier, a spokesman for China's commerce ministry said Chinese and U.S. officials are in close touch and going through necessary procedures before signing a Phase 1 trade deal.

Gold has been on the rise recently as a hedge against potential inflation, dollar weakness and increased equity market volatility in 2020, Abbasi said.

U.S. Treasury yields edged lower before the Treasury Department was to sell $43 billion in seven-year notes, with volume light during a holiday-shortened week.

The auction comes after the U.S. government drew strong demand for a $41 billion sale of five-year notes on Tuesday and slightly soft interest in a $40 billion two-year note sale on Monday.

The American Petroleum Institute, an oil industry group, said late on Tuesday that U.S. crude stocks fell by 7.9 million barrels last week, much more than the decline forecast by analysts.