By Stanley White TOKYO (Reuters) - Asian stocks clung to tight ranges on Thursday as investors awaited key Chinese data for clues on how much the 16-month trade war between Beijing and Washington has hit growth in the world's second-largest economy. MSCI's broadest index of Asia-Pacific shares outside Japan fell 0.01% 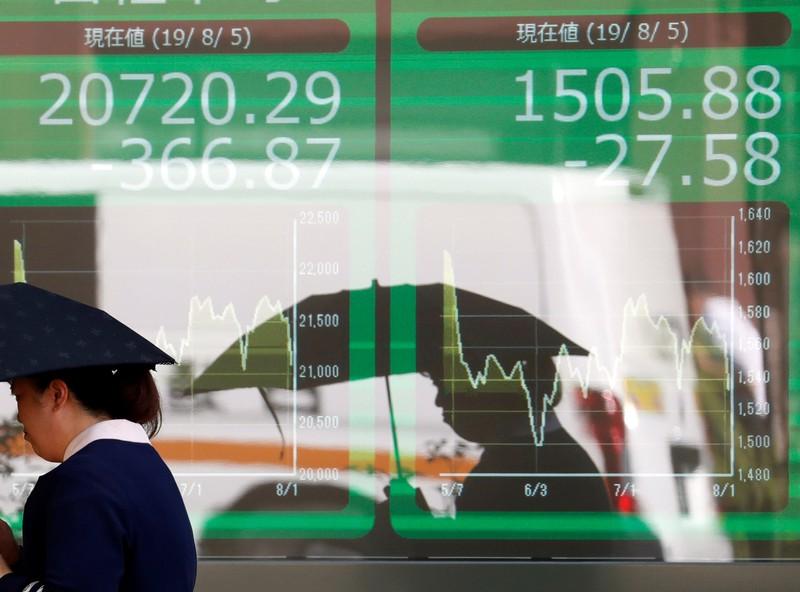 TOKYO (Reuters) - Asian stocks clung to tight ranges on Thursday as investors awaited key Chinese data for clues on how much the 16-month trade war between Beijing and Washington has hit growth in the world's second-largest economy.

Dashing previously upbeat expectations about a resolution to the Sino-U.S. trade war was a Wall Street Journal report that said negotiations had hit a snag over farm purchases. Worries about violent anti-government protests in Hong Kong also soured investor sentiment.

In the cautious climate, the yen and the Swiss franc, two currencies considered safe-havens, held onto gains against the dollar.

Investors are trying to determine whether the stimulus measures the Chinese government has taken so far are helping prevent further economic slowdown. However, complete confidence in the global outlook is unlikely to return until there is a lasting solution to the U.S.-China trade war.

"The markets have been pushing to new highs, but it's been a bit of a bumpy ride," said William O'Loughlin, portfolio manager at Rivkin Asset Management in Sydney.

"The markets have realised that the news on trade is going to swing back and forth. I wouldn't be surprised if there is more weakness in China's economy. I would want to see several months of improvement before I saw we've reached the bottom."

U.S. stocks have climbed to record levels recently, fuelled by interest rate cuts, positive earnings, and signs the economy is bottoming out, but doubts about progress in U.S.-China trade negotiations remain a huge risk to financial markets and global growth.

Washington and Beijing have imposed tariffs on each other's goods in a bitter dispute over Chinese trade practices that the U.S. government says are unfair.

Chinese data for October due at 0200 GMT is expected to show industrial output growth slowed but retail sales accelerated slightly.

Investors and economists will scrutinise the data to determine whether China can shake off the negative impact of punitive tariffs.

In currency markets, the yen

Sentiment in the currency market remained weak after U.S. President Donald Trump on Tuesday threatened China with additional tariffs if they do not reach a so-called "phase one" trade agreement.

Traders are also keeping an eye on unrest in Hong Kong.

Anti-government protesters dug in at several university campuses across the city on Wednesday, setting the stage for further clashes with the police. Protests against Chinese rule of the former British colony started in June this year.

Barkindo also said he was confident that OPEC and its allies will continue to curb supplies next year.