By Saqib Iqbal Ahmed NEW YORK (Reuters) - An index of stock markets worldwide crept lower on Thursday on uncertainty over the outlook for U.S. interest rate cuts and weak U.S. manufacturing data that raised concerns about the health of the world's largest economy 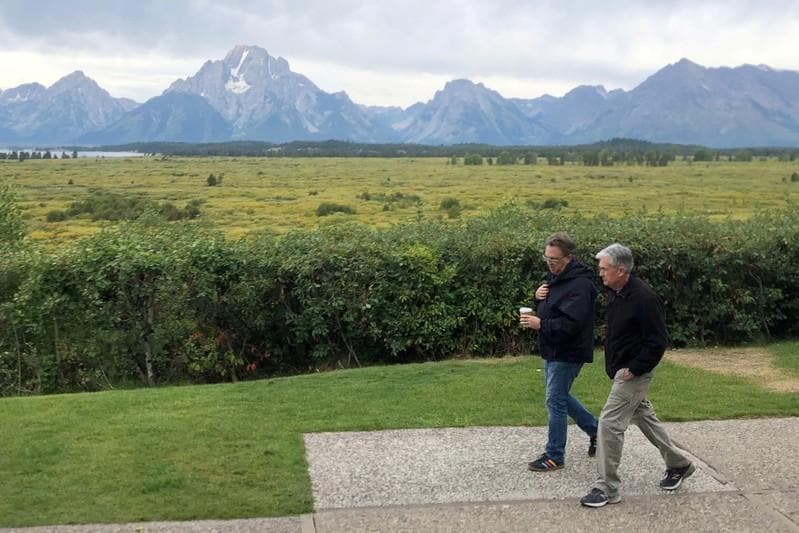 NEW YORK (Reuters) - An index of stock markets worldwide crept lower on Thursday on uncertainty over the outlook for U.S. interest rate cuts and weak U.S. manufacturing data that raised concerns about the health of the world's largest economy.

U.S. manufacturing industries in July recorded their first month of contraction in almost a decade amid concerns about whether the U.S.-China trade conflict would tip the economy into a recession, a private survey showed.

Investors' focus, however, remained firmly on Friday's speech by Federal Reserve Chair Jerome Powell at a Jackson Hole, Wyoming, event, which could offer clarity on the direction of U.S. monetary policy.

The Fed has come under increasing pressure to cut borrowing costs more, including a call by President Donald Trump on Wednesday for the central bank to reduce its benchmark rate.

The Dow Jones Industrial Average <.DJI> was the strongest of the three U.S. major stock indexes, helped by a 4.24% jump in Boeing's

"The market is pausing as investors are waiting for big news tomorrow on Chairman Powell's speech," said James Ragan, director of wealth management research at D.A. Davidson in Seattle.

European shares, which found support from upbeat surveys on Germany and the euro zone, declined on a report that the Bundesbank sees no need for German fiscal stimulus right now. The pan-European STOXX 600 index <.STOXX> closed down 0.40%.

In currency markets, the dollar slipped 0.1% against a basket of other major currencies to 98.193 <.DXY>, but moved within narrow ranges as investors awaited more clues from the Fed.

While the Fed's latest minutes showed U.S. policymakers are reluctant to begin a big rate-cutting cycle in the coming months, market participants still expect it to signal a stimulus measure, or an affirmation that the U.S. central bank is on a steady path to ease interest rates, a scenario viewed as negative for the dollar.

Kansas City Fed President Esther George and Philadelphia Fed President Patrick Harker said on Thursday the U.S. central bank currently does not need to deliver more stimulus to the economy after it cut rates for the first time in more than a decade last month.