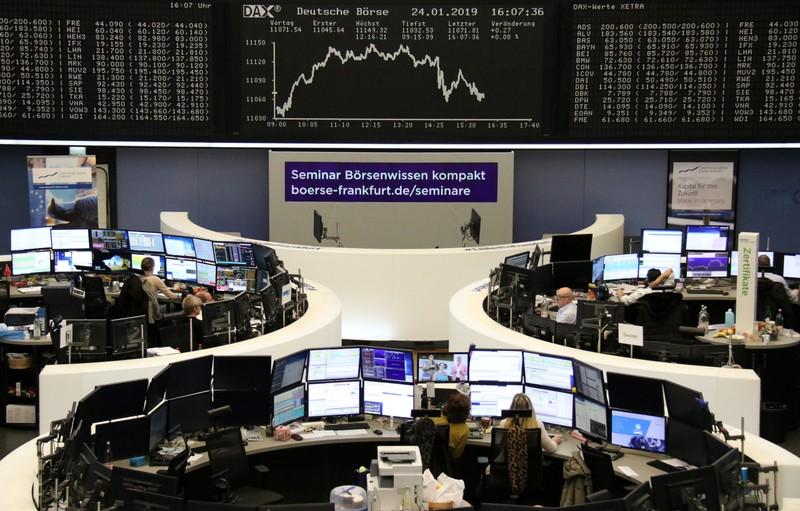 But the dollar index fell from the three-week high hit on Thursday, as traders eyed next week's Federal Reserve meeting for insight on whether policy makers will continue to take a cautious tone on the interest rate path this year.

On Friday afternoon, on the 35th day of a record shutdown that has left hundreds of thousands of federal workers missing two paychecks, Trump announced a tentative deal with lawmakers to reopen the government until Feb. 15.

"It’s a contingent agreement that only lasts for three weeks. Some sort of agreement was priced in this morning," said Randy Frederick, vice president of trading and derivatives for Charles Schwab in Austin, Texas, though he noted that the question remains on whether a permanent deal can be reached by the end of the three weeks.

"Earnings have also been a positive component although the number of beats is lower than the last two quarters and expectations were lowered," he added.

However, not all investors were optimistic as some turned to gold, often seen as safe-haven bet. Spot gold

In currency, the euro rebounded against the dollar after falling to its lowest level in six weeks Thursday when European Central Bank President Mario Draghi did not alter a downbeat assessment on the euro zone's economy.

According to the latest Reuters polls of hundreds of economists from around the world, a synchronized global economic slowdown is under way and any escalation in the U.S.-China trade war would trigger a sharper downturn.

In a note to clients, UBS Global Wealth Management's chief investment officer, Mark Haefele, said that rhetoric on U.S.-China trade has become more positive and that Beijing has taken steps to stimulate its economy.

"While economic and earnings growth is slowing, we believe it is unlikely that growth will drop far below trend," he said.

Chinese Vice Premier Liu He will visit the United States on Jan. 30 and 31 for the next round of trade negotiations with Washington.

The British pound was up 0.8 percent

In U.S. Treasuries, 10-year yields bounced from a one-week low as looming Treasury supply next week and caution ahead of the Fed's policy meeting and the government's payrolls report added upward pressure.[US/]