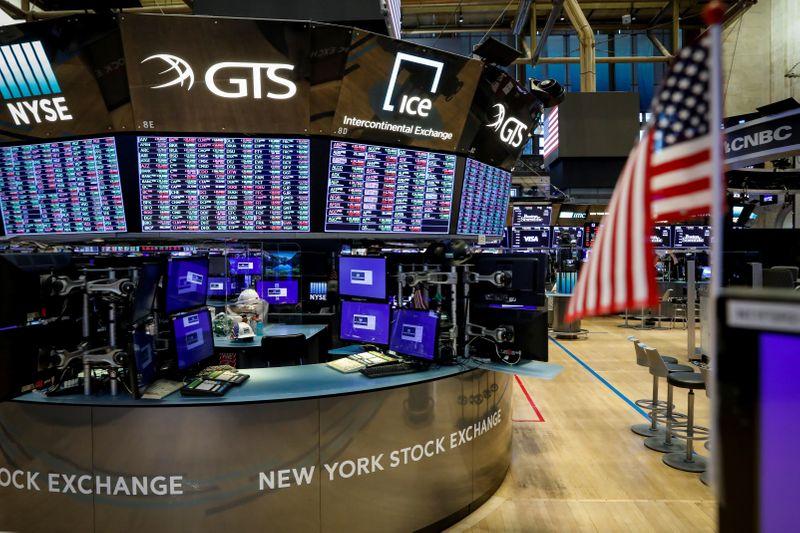 (Reuters) - Wall Street's main indexes climbed on Tuesday on growing signs that U.S. lawmakers were making headway in their talks over stimulus to support an economic recovery from the impact of the COVID-19

Pelosi and Treasury Secretary Steven Mnuchin will also talk at 3 p.m. ET (1900 GMT) on Tuesday, according to a source.

"Visibly there is optimism that the stimulus deal is going to be done at the end of the day," said Matthew Stucky, portfolio manager, equities at Northwestern Mutual Wealth Management Co.

Latest national opinion polls pointed to a victory for Democratic challenger Joe Biden, though the contest is closer in swing states that decide elections including Florida, North Carolina and Pennsylvania.

All 11 major S&P sectors were up, with financials, industrials and consumer discretionary stocks rising over 1%.

Netflix Inc dipped 0.5% ahead of its third-quarter earnings report.

International Business Machines Corp edged past estimates for quarterly revenue on Monday, bolstered by higher demand for its cloud services. The company's shares, however, fell 5.9% after it stayed away from issuing a current-quarter outlook, citing economic uncertainty related to the pandemic.

The U.S. Justice Department and 11 states filed an antitrust lawsuit against Alphabet Inc's Google for allegedly breaking the law in using its market power to fend off rivals. Alphabet's shares were up 0.8%.

The S&P index recorded 15 new 52-week highs and one new low, while the Nasdaq recorded 57 new highs and 22 new lows.