By Emma Thomasson and Richa Naidu BERLIN/CHICAGO (Reuters) - Kroger Co has room to improve on sales and is looking to its Deluxe Unicorn Swirl ice cream and other store-brand products to boost growth, Chief Executive Rodney McMullen said on Thursday. Multicolored, sparkly ice cream is an unlikely battleground in U.S 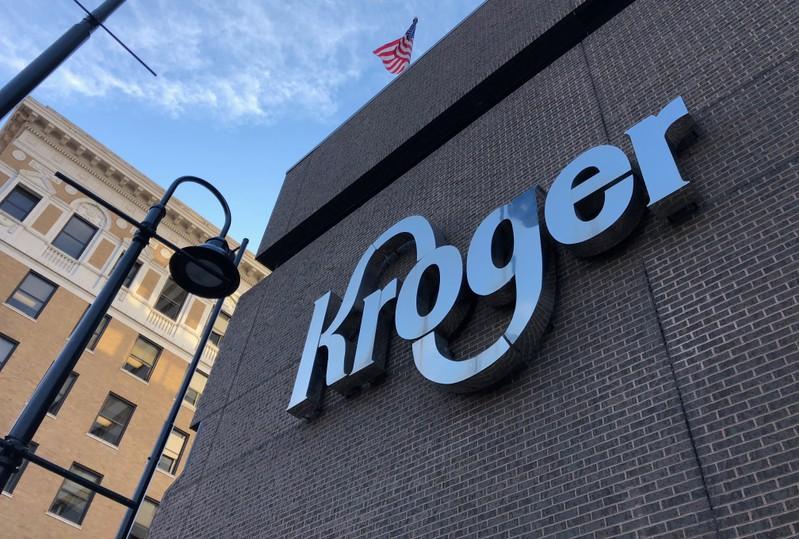 By Emma Thomasson and Richa Naidu

BERLIN/CHICAGO (Reuters) - Kroger Co has room to improve on sales and is looking to its Deluxe Unicorn Swirl ice cream and other store-brand products to boost growth, Chief Executive Rodney McMullen said on Thursday.

"We know we can do better when it comes to identical sales results," McMullen told analysts after Kroger posted quarterly same-store sales below Wall Street estimates, sending its shares down 2.5%.

The grocer's store-brand business was one of its most powerful tools, McMullen said.

By churning out new house-brand items, Kroger hopes to tap into broad sales growth for private labels. The push comes as grocers compete fiercely on price and race to expand online ordering and delivery, an area where the biggest U.S. grocery chain has lagged.

Kroger added 1,022 "own brand" items in 2018, and each supermarket on average stocks more than 15,000 private-label products such as pet food, clothes, furniture, meal kits and office supplies. Kroger's 16 house brands account for more than 30% of unit sales, the company said in March.

"We don't see this slowing down at all," McMullen had told Reuters in a separate interview in May.

Cincinnati-based Kroger has long made store brands that compete with name brands from Kraft Heinz Co, Nestle and others. But it started focusing more on its own brands in 2012 and flagged them as key to reviving sales growth when introducing its “Restock Kroger” plan two years ago.

Kroger's Simple Truth line hit $2.3 billion in annual sales to become the biggest U.S. natural and organic brand, the grocer said in March. Sales of its Kroger range and premium Private Selection food line are also growing, with the total own brand portfolio expanding 45% since 2011.

Kroger debuted its cake batter-flavored Unicorn Swirl in March, and saw more than 2.5 million likes and shares on social media for the product on National Unicorn Day on April 9.

“I have a lot of followers who also share my type of diet and I like sharing new finds/yummy products so they can try them out as well,” Schneider said in a Twitter direct message.

Almost half of Kroger's private-label grocery lines, including bakery and dairy items, are produced in its 37 plants, giving it an advantage when it comes to creating and testing out items.

Kroger makes more in-house than other U.S. retailers, with Walmart outsourcing all store-brand production until very recently, when it opened a dairy in Indiana, retail consultant Roger Davidson said.

"They (Kroger) are very serious about private label and in my opinion better than any consumer goods company in the U.S.," said Davidson, who used to oversee food procurement at Walmart. "Big CPG companies are really struggling," he said, referring to consumer packaged goods makers.

Kroger has been looking for ways to claw back market share from Walmart, the world's biggest retailer, and German discount chain Aldi. It also has to grapple with Amazon's fast-growing private-label sales, both online and in Whole Foods.

Soaring commodities and freight costs have pressured margins at companies like Procter & Gamble Co and Unilever PLC in recent years, making it harder for them to compete.

Meanwhile, Kroger's private-label margin is typically 600 to 800 basis points higher than that of big consumer brands, McMullen said on Thursday.

Private-label products on average are about 20% less expensive than branded goods, according to data from market research firm IRI.

At a Kroger-owned Mariano's in Chicago, 24 bottles of own-brand water cost $2.50 versus $4.99 for Nestle's Pure Life, for instance. The world’s No.1 consumer company said in April there was no point in Pure Life trying to outcompete private-label bottled water.

Own-brand products made up 14.9% of U.S. store sales in 2018, up half a percentage point, with frozen, pet and baby products growing fastest and millennials buying most, according to IRI.

That compares with an international average of 39.4%. The share is highest in Britain at 52.5%, in part due to discounters like Aldi.

Aldi is expanding rapidly in the United States and seeks to become the No.3 U.S. grocery chain with 2,500 stores by 2022. It sells products that are almost entirely house brand.

Kroger has a 400-person team developing its brands. The company poached Gil Phipps in 2012 from Texas-based retailer H-E-B, which has sought to emulate British store brand leaders like Sainsbury's since the 1990s.

But Walmart has also been adding private labels, while already squeezing Kroger on price and outperforming on e-commerce and automation.

As part of the "Restock Kroger" drive, the company is also investing in store revamps and delivery, although a joint venture with British online grocer Ocado is taking time to ramp up.

"I worry whether Kroger is really keeping the end consumer in mind. They have so many irons in the fire," said consultant Davidson.

(Additional reporting by Siddharth Cavale in Bengaluru and Nandita Bose in Washington; Editing by Meredith Mazzilli)