By Ju-min Park SEOUL (Reuters) - South Korea's delivery workers have fallen into what they call a 'legal blind spot' and say it's a deadly place to be as the novel coronavirus drives an unprecedented boom in online business. Labour rights have made huge progress in South Korea over the past couple of decades but the couriers say they have seen little benefit. 'Work-life balance? 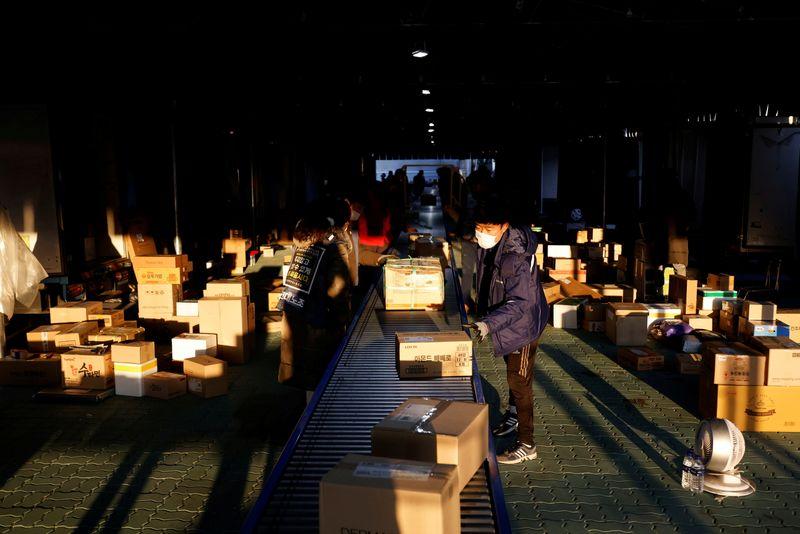 SEOUL (Reuters) - South Korea's delivery workers have fallen into what they call a "legal blind spot" and say it's a deadly place to be as the novel coronavirus drives an unprecedented boom in online business.

Labour rights have made huge progress in South Korea over the past couple of decades but the couriers say they have seen little benefit.

Parcel shipments increased some 12% a year in South Korea from 2004 as online shipping grew, then surged 23% from February to October this year, compared with the same period last year, as the pandemic hit, according to government data.

The big delivery firms are enjoying strong profits. CJ Logistics reported a 21% rise in first-half operating profit and Hanjin Transportation posted a 35% increase. Those companies represent about a 64% of the delivery market.

Most of South Korea's 54,000 delivery workers are hired under subcontracts that deny them the safeguards and benefits regular employees get.

Workers and union officials say legal loopholes leave them exposed to pressure to put in unsustainable hours - conditions, they say, that have contributed to deaths.

Labour activists say they have compiled accounts from relatives of 14 people whose deaths this year they attributed to a system that means workers have to put in unreasonably long hours to make ends meet.

One of those who died was Kim Won-jong who developed breathing difficulties at work. His father blamed the relentless demands of his job.

"He was running around, running around for 14 hours without time to eat," the father, Kim Sam-young, said at a labour rally in October as he held a portrait of his son.

Another delivery worker, Seo Hyung-wook, suffered chest pains and breathing problems at work and died later of heart failure, his sister said. She too blamed the pressure of work.

One worker committed suicide after leaving a note about the hardships at work, a trade union said.

"Fifteen people already died, which is ironic, because we aren't working to die but to live," said Jeong.

Full-time workers in Asia's fourth largest economy have a cap on weekly work hours, representation by powerful unions and holidays, under improvements over the past decade.

But delivery people and others working under subcontracts are regarded as self-employed and do not get the minimum hourly wage, nor overtime, and most have no insurance for on-the-job injuries.

There are some 2.2 million such workers, equivalent to 8% of the workforce, according to government data.

Yoon said in recent years the companies had begun investing in equipment like sorting machines though he acknowledged working hours for couriers were still long.

Jeong start his day at 7 a.m. with a five-hour stint at a conveyor belt sorting about 250 packages to deliver that day. He is not paid for the sorting.

Then, usually not taking a lunch break to save time, he drives a truck he pays for until he finishes at about 9 p.m. The father of three takes home about $2,200, about average for South Korea's couriers, according to a recent survey.

But couriers put in some 71.3 hours a week to earn it - which works out at less than the minimum wage on an hourly basis - and is about 10 hours longer than what's defined as "overwork", according to the September survey by the Center for Workers' Health and Safety rights group.

Labour officials and activists say competition between the courier companies means the fees they're willing to pay, now about 800 won ($0.72) per package, are also being squeezed.

Following a public outcry over the recent deaths, the big logistics firms apologised for causing public concern and offered condolences to families of those who died. They also promised to ease the workload.

A spokesman for Hanjin said it would introduce annual check-ups for couriers and extra sorting staff from this month.

A labour law expert said governments looking out for the interests of business allies had long done little to help contract workers.

"They want to be friends with the corporations and don't want to burden them," said Yun Ae-lim at the Seoul National University.

Labour Minister Lee Jae-kap said this month delivery workers were paying the price for the explosive growth of the business and he promised help.

"Policy, infrastructure and technology hasn't kept up with the pace of growth of the delivery industry and the burden has manifested in long hours and heavy workloads," Lee told a news conference.

Worker Kim Sang-yong said he was not holding out much hope at a time of record unemployment.

"No one can just quit in the middle of this job crisis," said Kim, who delivers for Hanjin.

"It's a tough job but we just have to put up with it."